Israel has reportedly notified the Biden administration that it will keep the White House in the loop regarding significant deals it strikes with China and is prepared to reexamine such agreements if the United States raises opposition.

The matter was raised last month during US National Security Adviser Jake Sullivan’s meeting with Foreign Minister Yair Lapid in Jerusalem, the Haaretz newspaper said in an unsourced report Monday.

While the Biden administration has yet to make specific demands of Israel regarding its relations with China, Israel has begun to hold discussions on the matter with the aim of adjusting its policy to better satisfy the Americans, the report said.

Israel has asked the US to offer alternative companies that it could work with instead of Chinese ones, given Washington’s backlash, according to the report.

Israel is open to promoting joint initiatives with India and the United Arab Emirates, the report said. 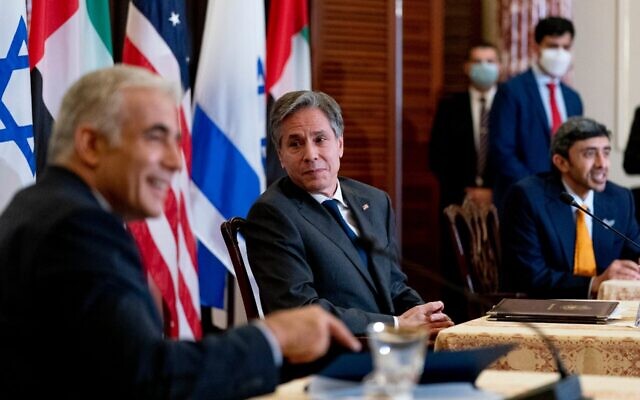 Jerusalem faces a dilemma as it doesn’t want to harm its relations with China by too publicly flaunting its willingness to accede to US demands on the matter.

Amid a US-China trade war that has ebbed and flowed in recent years under both the Trump and Biden administrations, Israel and China have seen warming relations and more interest in Israeli innovations, especially in medical tech, robotics, food tech, and artificial intelligence.

The US has publicly brought up the Israeli relationship with China several times recently. Ahead of a conversation between Lapid and US Secretary of State Antony Blinken in October, a senior official said that Blinken would hold a “candid” conversation with his Israeli counterpart “over risks to our shared national security interests that come with close cooperation with China.”

CIA director Willian Burns reportedly raised US concerns over increasing Chinese investment and involvement in Israel — particularly its tech sector — during his meeting in August with Prime Minister Naftali Bennett in Jerusalem.

Israel’s ties with China also emerged as a rare source of friction with Washington during the Trump administration.

Nevertheless, Israel and China have seemingly been developing warmer economic and political ties in recent months. In November, President Isaac Herzog held the first-ever phone conversation between the presidents of Israel and China, where they discussed Iran’s nuclear program, the Abraham Accords and bilateral ties.

The leaders also spoke about the China-Israel Joint Committee for Innovation Cooperation, a mechanism that was established in 2014 to promote collaboration across government ministries on innovation.

Israel has also taken steps to placate China on the international stage. In October, Israel refrained from signing on to a joint statement at the United Nations that expressed concern over Beijing’s treatment of its Muslim Uighur minority.

Join the Times of Israel CommunityJoin our CommunityAlready a member? Sign in to stop seeing this

You’re serious. We appreciate that!

We’re really pleased that you’ve read X Times of Israel articles in the past month.

That’s why we come to work every day – to provide discerning readers like you with must-read coverage of Israel and the Jewish world.

So now we have a request. Unlike other news outlets, we haven’t put up a paywall. But as the journalism we do is costly, we invite readers for whom The Times of Israel has become important to help support our work by joining The Times of Israel Community.

For as little as $6 a month you can help support our quality journalism while enjoying The Times of Israel AD-FREE, as well as accessing exclusive content available only to Times of Israel Community members.