The skies over the South China Sea

Evergrande and these Chinese real estate developers are already in trouble

“The bottom line is that businesses should be aware that the risks faced in mainland China are now increasingly present in Hong Kong,” White House press secretary Jen Psaki told reporters.

But long before the warning, some Americans and other Westerners with long-lasting professional ties with China had already grown wary of visiting both mainland China and Hong Kong.

Last month, online magazine ChinaFile said among 121 China-connected scholars, journalists, former diplomats and civil society workers it surveyed, only 44% said they planned to travel to China once coronavirus restrictions are lifted; 40% said they probably or definitely would not visit, while the rest were unsure.

Though not a scientific survey, the results nevertheless suggest a significant shift in attitudes among a group of prominent figures in the China field, most of whom would almost certainly have planned to travel to the country a year or two ago as part of their professional routines, it said.

“Among those who replied they would probably or definitely not visit, reasons ranged from previous visa rejections to outright fear of detention for themselves and for the Chinese people they work with or interview, and concerns that restrictions on movement, research, or reporting would compromise the professional value of spending time in China,” said ChinaFile, which is published by the Asia Society’s Center on US-China Relations.

In the article, many respondents cited the ongoing detainment of Canadians Michael Kovrig and Michael Spavor as a primary source of their anxiety.

It’s been four months since Kovrig and Spavor were tried behind closed doors and 953 days since they were detained, but Beijing has not released any news on either of the men.

Kovrig, an NGO worker and former diplomat, and Spavor, a businessman with a focus on North Korea, were detained following the arrest of Huawei executive Meng Wanzhou in Vancouver. Beijing has charged them with espionage, but most outside of China see their detention as retaliation for Meng’s arrest and a bargaining chip to help leverage her release.

“It’s bad enough to have to worry you’ll be jailed in retaliation for whatever critical comments you made even years ago. It’s much more unsettling to think you could be thrown in jail as a hostage simply because you hold an American passport, the way Michael Kovrig and Michael Spavor were thrown in jail as Canadian hostages, in retaliation for something my government did that the Chinese regime didn’t like,” wrote James Mann, a journalist and author on China.

For many, the continued detention of the two Canadian Michaels will likely serve as a chilling reminder of the risks associated with visiting China, even after it reopens its borders to the world.

And so far, Chinese authorities have shown little urgency in reopening. Unlike smaller economies that rely heavily on cross-border capital flows, outside talent or international tourism, Covid-19 border restrictions have not stopped China from roaring back into growth.

A closed border also gives the Chinese government more control on who they want to let into the country. Beijing expelled at least 18 foreign correspondents last year, and few Western outlets have been granted visas for new journalists to be based in China, according to the Foreign Correspondents’ Club of China.

Meanwhile, tens of thousands of international students enrolled in Chinese universities have been barred from returning to the country, with many voicing frustrations on Twitter and tagging Chinese diplomats for help — to no avail.

Given China’s zero tolerance for Covid cases, it is likely that some restrictions might stay in place until the Beijing Winter Olympics next February, or even as late as the 20th Communist Party Congress next fall — both politically important events of which Beijing wants to ensure absolute success.

Like elsewhere, the pandemic has changed China in many ways — some of which might add to the concerns of foreigners who plan to visit.

Visitors will be greeted by expanded digital surveillance, which played a central role in China’s successful containment of the virus. Their everyday movements will be tracked by a mandatory smartphone “health code” app, required for entry to office buildings, restaurants, shopping malls and train stations. Facial recognition cameras, already common in public places, have also proliferated in residential areas.

Meanwhile, nationalistic sentiment, which was already rising in China prior to the pandemic, has reached new heights.

Many Chinese are proud — rightfully — of China’s ability to swiftly tame the outbreak, despite its initial mishandling. But Chinese officials and state media have also pushed the narrative that it is a further vindication of Beijing’s rise — and the West’s decline.

But with the borders yet to fully reopen, it remains to be seen how much of the surging ultra-nationalism online will affect everyday actions and encounters.

Photo of the day 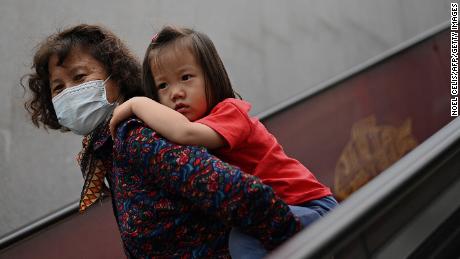 The more the better: China said on Tuesday it would allow tax deductions for expenses on children under 3 years old, and strictly regulate the after-school tutoring sector, as part of its efforts to raise the country’s plunging birthrates by encouraging couples to have more children. The Chinese government announced on May 31 it would allow married couples to have up to three children, instead of two. This week, it further clarified that the change — although not yet legislated — has already been effective since the announcement, amid confusion over its implementation.

At least 12 people have been confirmed dead in Zhengzhou, the provincial capital, where more than 20 centimeters (7.8 inches) of rain fell in one hour on Tuesday, according to the meteorological observatory.

All of the bodies recovered were taken from the city’s subway system, according to authorities.

Footage broadcast by state news agency Xinhua and shared widely online shows passengers in Zhengzhou trapped inside a flooded subway car, packed tightly together as the water climbs higher. Outside the window, dark floodwater rips past, surging down the subway tracks.

It is not clear how many people were trapped on the subway and rescue efforts remain ongoing across Zhengzhou, a city of 12.6 million on the banks of the Yellow River.

More than 100,000 people have so far been evacuated from low lying areas of the city, with thousands of emergency personnel deployed to assist in the effort, according to state-run media.

The record breaking rains, and similar flooding incidents happening in other parts of the country, have alarmed scientists and officials — raising questions as to whether China is prepared to deal with more extreme weather as the climate crisis deepens.

Fears among investors are growing over a debt crisis that has engulfed one of China’s largest property developers.

Shares in Evergrande Group cratered a combined 25% on Monday and Tuesday in Hong Kong, wiping out some $5 billion in market value and sending the stock to its worst level in more than four years.

The plunge came after a Chinese court froze $20 million worth of bank deposits from Evergrande at the request of one of its creditors.

Evergrande said Monday that it would take legal action against the creditor for demanding the court freeze its assets.

The company’s problems are many. Evergrande is one of China’s most heavily indebted developers, with borrowings amounting to more than $100 billion by the end of 2020, according to its financial reports.

Given the sheer size of the company — and the fact that its huge debt is widely held in China by banks and retail investors — a default by Evergrande could pose significant risks to China’s financial system.

Last month, Bloomberg reported that regulators had instructed major creditors of Evergrande to conduct a fresh round of stress tests on their exposure to the firm, to assess the potential hit to their capital and liquidity should Evergrande run into trouble.

“The downgrade reflects Evergrande’s weakened funding access and reduced liquidity buffer given its large debt maturities in the coming 12-18 months amid the tight credit environment in China and volatility in the capital markets,” Cedric Lai, a vice president and senior analyst at Moody’s, said in a statement at the time.

Shares of Evergrande have fallen 48% in Hong Kong since the start of this year.