Shenzhen, China – On a sweltering June afternoon in a quiet corner of Lianhuashan Park at the heart of China’s high-tech showcase city of Shenzhen, 25-year-old Mr Ling is engaged in the decidedly low-tech activity of browsing advertisements for potential partners.

Men get light blue cards, women light pink, grouped by decade of birth. The cards hang stiff and impersonal from hundreds of wires in the circular “Matchmaking Corner” structure built by the municipal government, whose offices are a quick walk away.

Like many younger men and women living in Shenzhen without official residency in the city, Ling faces chances of finding a wife, starting a family, and actually staying in the city long-term that are slim – even if he’d prefer to take that course.

“The biggest issue is work and having enough money and getting a house,” he said. “I have a few friends who used to work in Shenzhen but have now moved to other areas. The cost of living puts too much pressure on them.”

Ling’s hukou – China’s internal family registration system – ties most of his health and social insurance, as well as his future children’s education, to a rural village in Shandong province far to the north, the place of his birth.

Ling, who did not want his full name used to protect his privacy, works as a real estate agent. But the job entails little beyond answering phones, escorting potential buyers to properties, with little chance of upward mobility.

As China moves to allow couples to have up to three children, it is increasingly clear that the government will need to address the needs and concerns of people like Ling who would like to start families and have children but are pressured by a lack of education, living costs and barriers to movement such as the hukou system – realities of life in China that are dissuading many working couples from contemplating the idea of having more than one child, let alone two or three. 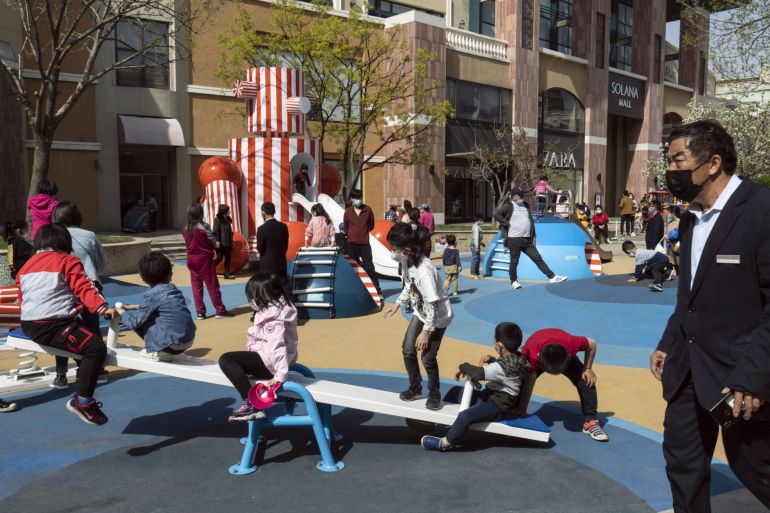 A lack of education, living costs and barriers to movement such as the hukou system are realities of life in China that are dissuading many working couples from contemplating the idea of having more than one child, let alone two or three [File: Giulia Marchi/Bloomberg]

‘How can we take care of nine?’

An online survey circulated in early May in China found that slightly over half of young people don’t want to have one child, let alone a second or third.

One reason is the cost of buying a house. Most men feel they need to have property before proposing marriage, so that is a major premarital barrier for a man and his extended family, which often helps pay for that first house. Others included concerns over who would take care of the children, the high cost of education and after-school programmes, point systems in first and second-tier cities that determine if a child can get into a local school or not, and changing mindsets among younger people who want to pursue individual dreams that don’t revolve around creating a family.

Women – who shoulder the lion’s share of childcare – are also increasingly less willing to have a second child after becoming exhausted from looking after their first.

One remark that circulated on Chinese social media the hours after China announced the move to a three-child policy on the final day of May was of a couple saying: “We already have to take care of a family of eight, how can we take care of nine?”

Translation: Working-age couples in China often have to take care of themselves as well as two sets of parents who don’t have much income from savings or pension plans if any, plus any kids they already have.

Though the parents of such workers often do help with home and childcare, the costs associated with healthcare as they age – along with child-rearing costs – are a huge burden.

China’s fertility rate slowed to 1.3 births per woman in 2020 and looks likely to hover around that rate unless authorities in Beijing ease pressure on working families. While those authorities say efforts to improve policies related to maternity leave and insurance, as well as to strengthen tax and housing policy support, are under way, most working parents in China are not getting their hopes up. 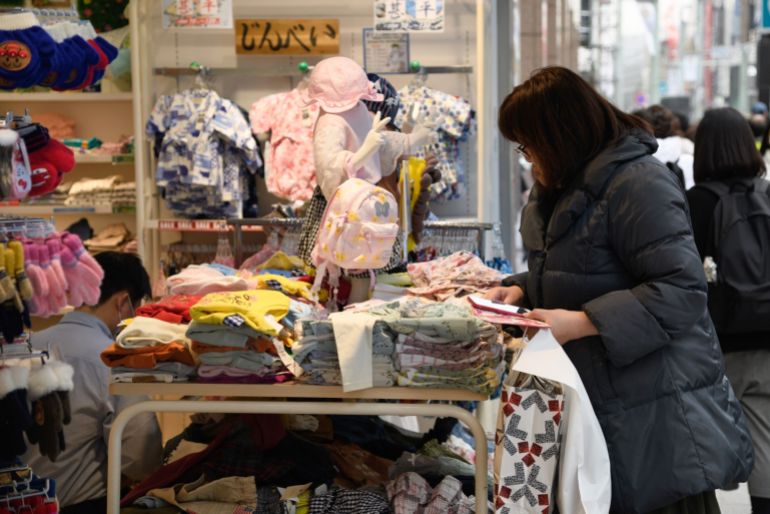 Government benefits that were rolled out after China eased its one-child policy in 2015 failed to reduce financial burdens and increase birth rates significantly [File: Akio Kon/Bloomberg]Benefits rolled out after the one-child policy was eased in 2015 failed to reduce burdens and increase birth rates significantly.

Chang Qingsong, an associate professor at the Population Research Institute of Xiamen University, believes the government should go further and remove the limits entirely so families can decide whether they want kids or not.

“The Chinese government could loosen the limit on the number of children that a family can have, and provide maximum support to the families who have the ability and conditions to have more babies,” he told Al Jazeera.

“Instead of prescribing how many children they can have, the government needs to reduce the burdens on families to increase their intent to give birth,” he said. “Predictably, even if couples were allowed to have a third child, most couples would not.”

Failing or stagnant birth rates might not mean all that much at this moment, but as China’s population ages rapidly, economic growth could take a hit as the labour force shrinks 15 years from now, according to a note from Yue Su, principal economist with The Economist Intelligence Unit.

The new three-child policy could also have further negative short-term impacts on women, she wrote, with companies assuming women would want more children and potentially opting to hire men instead in order to dodge maternity costs and time away from work. 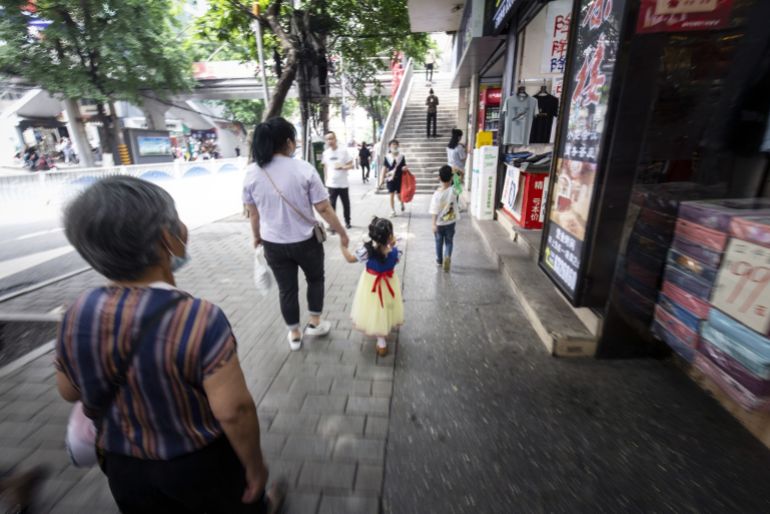 Failing or stagnant birth rates might not mean all that much at this moment, but as China’s population ages rapidly, economic growth could take a hit as the labour force shrinks 15 years from now [File: Qilai Shen/Bloomberg]Ashton Verdery, an associate professor of sociology and demography at Penn State University, said it appears that the three-child policy is more of a reaction to the recent census data showing China has a rapidly aging population and is fast closing in on its peak population, but a detailed policy to try to address the pressures could come later.

“I could imagine that China may build more housing that is friendly for larger families and things like that,” he said. “The Chinese state has much greater involvement in the economy and therefore might be able to move the needle a bit.”

For Scott Rozelle, a development economist and a co-director of the Rural Education Action Program at Stanford University, China’s demographic problem is not so much about quantity as it is about quality.

Much of that lack of quality in the labour force is because China has failed to provide education for all youth through high school, particularly in rural areas. 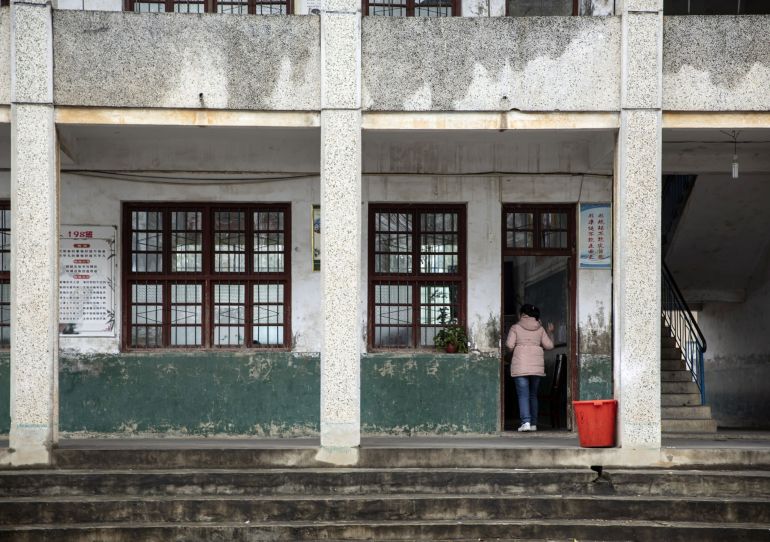 Research shows early indications that the birth rate decline is largely coming from rural areas of China primarily because women there do not feel their families could support more than one or two children [File: Qilai Shen/Bloomberg]Without raising the education levels of rural children and re-educating those rural hukou holders who didn’t make it through high school, simply having more children isn’t going to solve China’s looming labour problems and keep it from finding itself in a middle-income trap like Mexico or Brazil.

Recent research Rozelle has conducted shows early indications that the birth rate decline is largely coming from rural areas of China primarily because women there do not feel their families could support more than one or two children.

“My hypothesis is that the big fall in fertility has basically come from rural China in the past 10 years,” he told Al Jazeera. “Women now have so much more decision-making power over critical decisions like family size.”

China is currently putting into place a major policy for rural revitalisation across the country, but most of it is focused on agriculture and infrastructure programmes, rather than education, health and social welfare.

Rozelle said surveys of rural families over the years find that while they appreciate many of those infrastructure upgrades, for most the priority boils down to one thing: education.

“It’s coming where we aren’t going to need big quantities of labour to run our societies, what we need is high-quality labour,” Rozelle said. “So does rural revitalisation need to include education? Absolutely.”