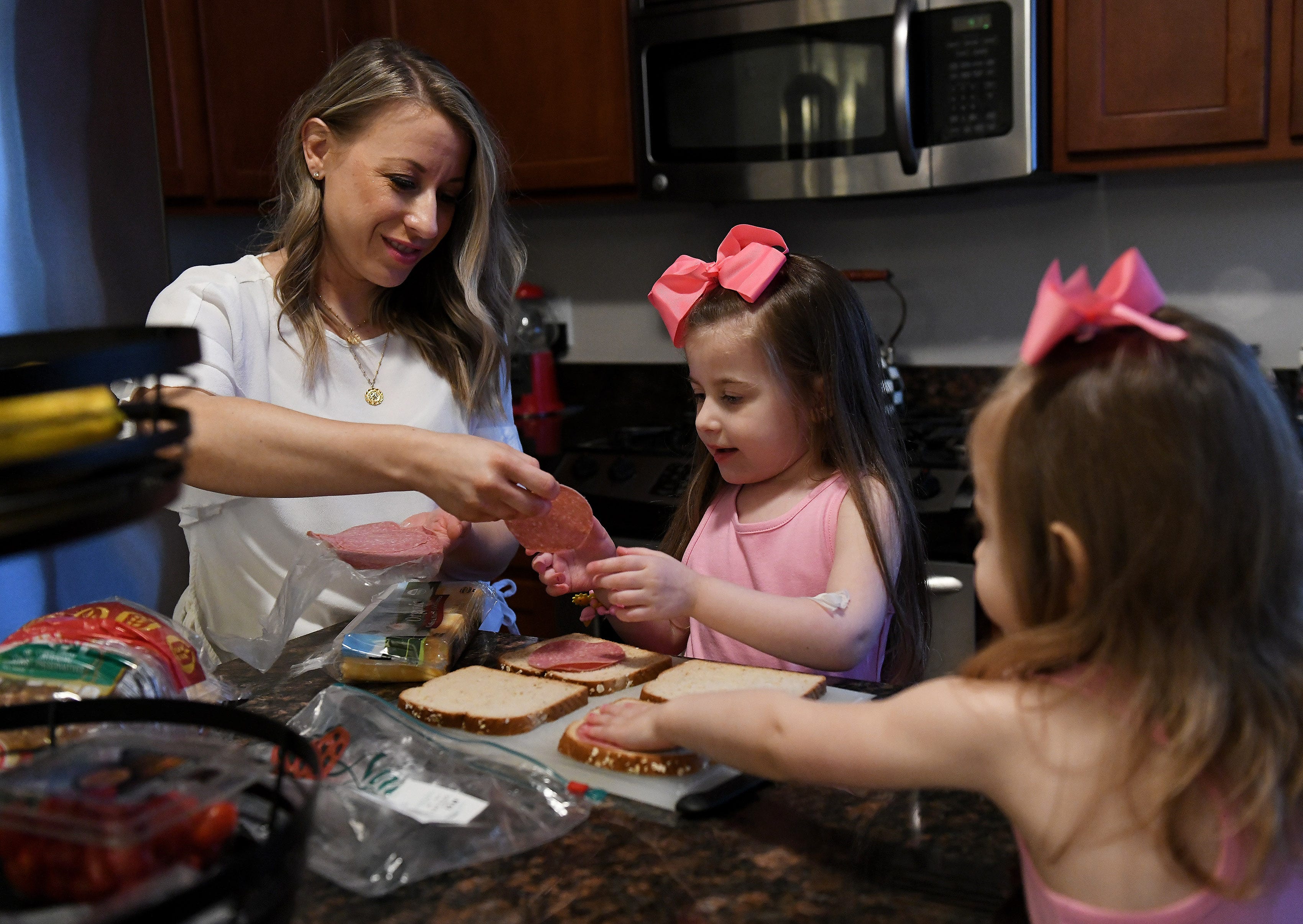 John Elkhoury on his daughter’s recovery from MIS-C including 6 days at Beaumont Hospital’s ICU.

Juliana had been attending preschool virtually, and Michelle and her husband, John, had been working from home for a year while caring for 2-year-old daughter Alexandria. No one in the family showed signs of COVID-19 symptoms, the mother said.

Despite routine doses of Tylenol, Juliana’s fever lasted for six days, and Michelle took her to the family’s pediatrician twice. Elkhoury began to worry more when her rambunctious toddler spent an entire day napping on the couch instead of playing. Then, her lips turned bright red and rashes broke out on her hands and feet.

Juliana initially tested negative for COVID-19 and showed no signs of respiratory distress, but her condition quickly worsened. She was hospitalized on March 20.

As the arteries around her heart swelled, her kidneys began failing and her hemoglobin levels dropped, doctors diagnosed her with multisystem inflammatory syndrome in children, often referred to as MIS-C, a rare and dangerous malady found in kids ages 2 to 15, weeks after they contracted COVID-19.

Juliana, who spent nearly a week in the intensive care unit, is slowly recovering at home. But her fight last month with a syndrome that can limit blood flow and damage the heart, kidneys and other organs in kids came as Michigan’s COVID-19 case rates for children under age 19 reached an all-time high and are now four times what they were a month ago.

We’re offering a great deal on all-access subscriptions. Check it out here.

“It was extremely serious and super scary as a parent because up until being admitted into the hospital, we had no idea that anyone in our house was even infected with COVID, let alone our 4-year-old daughter who wasn’t in school,” said Michelle, 36, of Macomb Township.

Juliana’s doctor, Dr. Bishara Freij, chief of pediatric infectious disease at Beaumont Children’s in Royal Oak, said the hospital is being aggressive in treating children diagnosed with the syndrome.

“At Beaumont, we’re proactive. If a child looks like they have MIS-C, we are now just admitting them to the ICU because they invariably deteriorate after admission. When you admit them, they’re either sick enough already, or will get sick enough shortly thereafter,” Freij said.

“About 70% in Michigan have ended up in ICU with this diagnosis.”

The Michigan Health and Hospital Association issued a statement Friday urging residents to vaccinate as COVID-19 pediatric cases have increased 237% since Feb. 19. Currently, 42 children are hospitalized in the state with COVID-19.

There have been 99 cases of the syndrome in Michigan and five deaths. The majority of cases are concentrated in lower southeast and west Michigan. Michigan ranks No. 20 of the states with the most known cases, according to the Centers for Disease Control and Prevention.

Nationally, there are 3,185 reported cases, resulting in 36 deaths.

CDC researchers conducted a study published Tuesday in JAMA Pediatrics that found in more than 1,000 cases, 75% of the patients did not experience coronavirus symptoms. But two to five weeks later, they became sick enough to be hospitalized.

Patients predominately have gastrointestinal and cardiovascular symptoms rather than respiratory. Almost all of the 1,733 patients in the study tested positive for COVID-19, “indicating that development of MIS-C was delayed by days to weeks after initial infection,” researchers noted.

Doctors are still studying the disease, but, Freij said, the syndrome might be forming due to the body’s immune response to the presence of the coronavirus.

“So the child gets infected, the immune response is supposed to help us clear this infection, but sometimes, the response is so exaggerated that this starts hurting us instead of just clearing the infected agent,” he said. “So it’s basically your body going into overdrive against the virus and as a result, you get this entity called MIS-C.”

The infection rate of MIS-C is around 2% of all children, but with a surge of new cases in Michigan, especially in children, “2%, which does not sound very high, actually becomes a lot of people,” said Freij, adding pediatric hospitalizations have been increasing over the last four weeks.

The good news is, if MIS-C recognized quickly, it’s treatable. Doctors use intravenous immunoglobulin therapy, steroids and other anti-inflammatory drugs to reduce inflammation and protect the heart, kidneys and other organs from lasting damage, said Dr. Donna Farber, a professor of microbiology and immunology at Columbia University.

Juliana spiked a low-grade fever of 100.1 on March 13. The following day, Michelle Elkhoury took her to her pediatrician where she presented with glossy eyes and was complaining of stomach pain.

“We thought OK, she’s just fighting a winter cold. They tested her for COVID and the flu and both were negative,” Elkhoury said. “I thought maybe she had a (urinary tract infection) because her stomach was hurting. They took a sample and we went home. The next day, that Tuesday, again, she was just not herself. Fever back and forth through the night, not sleeping good, and during the day she just kind of wanted to lay around.”

“We gave her Motrin and she fell back asleep,” Elkhoury said. “When she woke up again around 6:30 p.m., her eyes were completely bloodshot. Her lips looked like she had just had a bright red cherry Popsicle, the palms of her hands and feet had like this blotchy red rash on them, and her fever went up to 105.”

After returning to the doctor’s office a second time, pediatricians said it could just be the UTI flaring up with a combination of the medicine. A strong dose of Tylenol reduced her fever.

Two days later, Juliana was in more pain and didn’t have the energy to walk or eat. Pediatricians considered her rash hand, foot, and mouth disease, but Elkhoury believed it was something more.

“It seemed like we should have seen her getting better at six full days,” Elkhoury said. “To other parents, if your child has a fever, they have a rash on their hands and feet, their eyes are bloodshot and glassy, I would say that’s a huge indicator that they need to be seen by not just anyone — a medical physician.”

Nearly a week after her fever first spiked, Juliana was admitted to the hospital, where she spent six days in the ICU.

Juliana eventually tested positive for COVID-19 while in the hospital. Her parents, meanwhile, were shocked to test positive for antibodies as both of them were asymptomatic, Michelle Elkhoury said. The child was eventually released from Beaumont Royal Oak on March 26 after she was cleared of the virus.

The young child loves to cook but hasn’t been able to help out in the kitchen in a month. She is still recovering and only starting to get back to normal this past week by playing with her Barbies and Alexandria, her mother said.

“It took her a while, and it took time to get that confidence and strength back and last night saying, ‘Look mommy I can run, I can run,'” Elkhoury tearfully said. “It’s so sad because she was totally healthy before, this and it’s hard to watch her relearn how to do basic things.”

At her last checkup on April 2, “Juliana looked like a rose,” said Freij, the pediatrician.

“Juliana is a good example of someone who got sick, quite badly. Her heart’s ability to pump blood was very depressed, very poor,” he said. “However, I am happy to report that her heart is normal and her function has returned completely. She’s not completely done with her treatment, but it’s outstanding she was able to recover quickly.

“While it is very scary, despite the gravity of the situation, I try to tell parents the outcome is still favorable even though it might be a rough ride to get to that point.”

Columbia’s Farber told The Detroit News it’s not clear how the rare virus is resonating with children.

“There is some research to suggest that it’s linked … to the type of tissue antigens that you have, that means there may be a genetic component that makes people more susceptible to it as well,” Farber said.

“There is this blurring with Kawasaki disease, but the hallmarks to identify MIS-C are the very high fever, inflammation and the cardiac involvement, and those are very dangerous signs.”

As Michigan’s case rates for children 19 years old and younger continue to climb, Dr. Joneigh Khaldun, the state’s chief medical executive, said Friday the state is investigating 991 active outbreaks. From January to March, there have been 291 outbreaks from youth sports resulting in 1,091 infections, she said.

The Michigan Hospital Association noted that “the long-term health impacts of COVID-19 or MIS-C can be devastating.”

“We have seen heartbreaking stories of children on ventilators, experiencing amputation and more. Even one case is too many,” the association said in a Friday release.

“Once we reduce infection rates and vaccinate everyone else, fewer children will get sick,” Farber said. “Even if vaccines don’t release for children this year, getting everyone else vaccinated will protect the children.”