A coronavirus patient who was yesterday hospitalised in Adelaide is now in a critical condition, South Australian health authorities have confirmed.

The man, aged in his 40s, is one of 12 people in South Australia with COVID-19, all of whom acquired the virus overseas.

SA Health moved the man from a dedicated quarantine hotel for positive cases in Adelaide yesterday.

He is currently in the intensive care unit at the Royal Adelaide Hospital (RAH).

“One person was taken from Tom’s Court [medi-hotel] to the Royal Adelaide Hospital this morning because they were unwell and are currently being assessed there,” Dr Cusack said yesterday.

“This is a male in his 40s we believe has the South African variant.

“Clearly if someone is deemed unwell enough that they have to go to hospital, we have concerns for their welfare, but obviously they are in the right place.”

RECAP: Look back on the latest news on the COVID-19 pandemic.

Dr Cusack yesterday said the patient had been suffering breathlessness.

“Whether they’re sufficiently short of breath or their lungs are sufficiently impaired that they will need to remain in hospital is still to be determined by the emergency department at the Royal Adelaide,” he said. 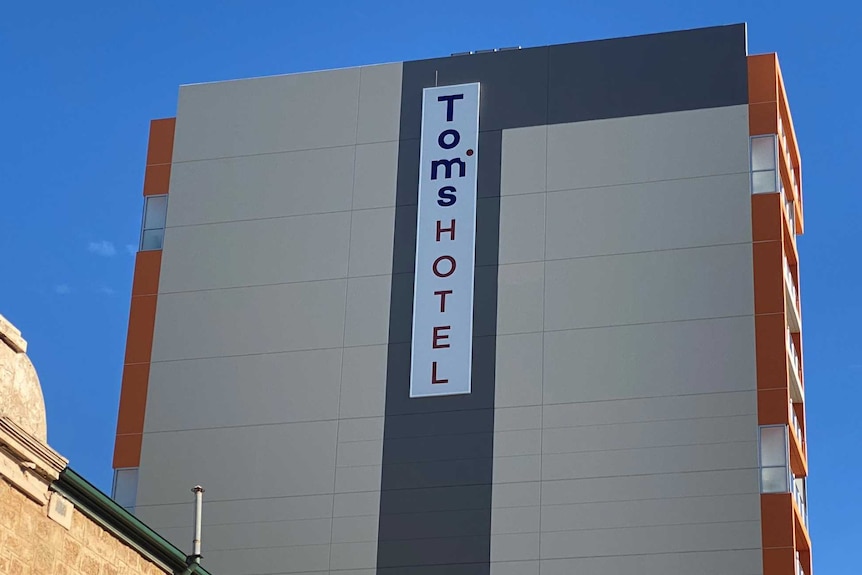 The man had been at the Tom’s Court dedicated medi-hotel before he was transferred.(

The 12 active cases in South Australia include a new case — a girl who recently returned from overseas and has been in a medi-hotel since her arrival.

“She is considered an old infection but has been added to our case numbers as she has not been diagnosed and counted overseas,” SA Health said.

The case takes the total recorded in SA since the start of the pandemic to 659.

South Australia yesterday reopened its borders to travellers from Greater Brisbane, after a hard border was imposed last week.

The decision was made at a snap meeting of the state’s Transition Committee, and in response to Queensland’s outbreak control efforts.

A total of 145 vaccinations were administered in the state yesterday.

“My thoughts go out to the individual and their family — they’d be very, very worried at the moment. For them, COVID and the serious complications of COVID are real,” he said.

“It can be serious even for people who are not in the older age group.”

Got questions about the COVID vaccines? We have answers

Confused about Australia’s vaccine rollout? We’ve tracked down the answers to the questions you’ve been asking.

Dr Moy said the “increased infectivity” of the new strains meant there was a higher risk of the virus “escaping” from controlled settings.

“Vigilance has to be even higher in these situations,” he said.

“The new variants appear to be more infectious … if you get the infection, you could become sicker.”

He added that, despite the vaccine rollout, the RAH case was an “important reminder” that coronavirus still posed a formidable threat to Australia.

“The risk is still there, particularly with winter coming,” he said.

“Although we’ve been pretty good during the summer and we’ve had talk of the vaccine, any relaxation is not something we should be getting into because [the virus] could make a comeback, as it has in Europe.”