A joint report by several branches of the United States intelligence community concludes “that racially or ethnically motivated violent extremists” are the “most likely to conduct mass-casualty” attacks against civilians.

The report defines “racially-motivated extremists” as those with “ideological agendas bias, often related to race or ethnicity”.

“Militia extremists” are those who “take overt steps to violently resist or facilitate the overthrow of the US Government” because they believe it to be “purposefully” taking steps to establish a “totalitarian regime”.

Those designated by the intelligence community as “militia extremists” often oppose federal and state laws and regulations, especially in relationship to gun ownership.

The declassified report comes in the wake of the January 6 riot at the US Capitol, an attempt by far-right groups to stop a joint session of Congress from certifying President Joe Biden’s electoral victory. 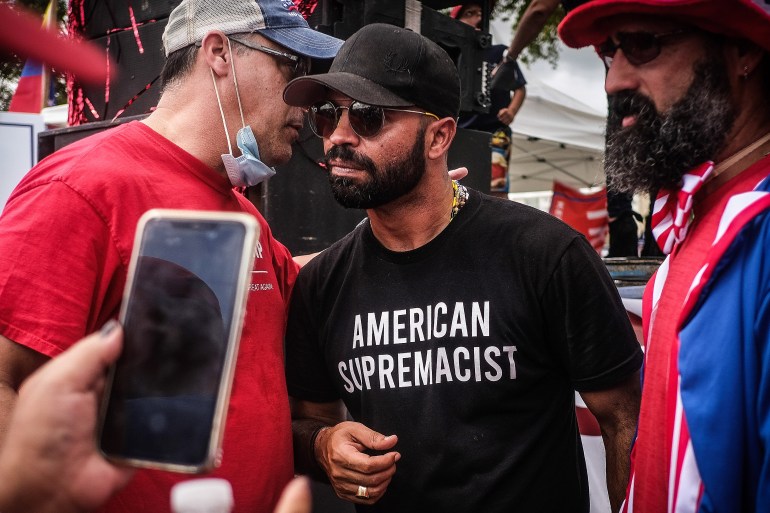 Far-right group the Proud Boys leader Enrique Tarrio interacts with supporters during the ‘Latinos for Trump’ demonstration, at Tamiami Park in Miami, Florida, on October 18, 2020 [File: Mario Cruz/EPA-EFE]The riot was allegedly led by members of far-right groups like the Proud Boys, which depicts itself as “Western Chauvinist”. The Proud Boys leader,Henry “Enrique” Tarrio, is of Afro-Cuban descent, but most members are white.

Alleged members of the Oath Keepers and Three Percenters, two of the most prominent militias in the US, have also been charged in relation to the riot.

Five people died after the riot, including one US Capitol Police officer.

The Biden administration promised to take steps to address white nationalist violence, which grew under the previous administration.

Murders determined to be motivated by bias reached a record high in 2019, with 51 deaths, according to FBI statistics.

Almost half the deaths came from a shooting at a Walmart in El Paso, Texas, that was meant to target Latinos.

The alleged attacker, Patrick Wood Crusius, posted a hate-filled manifesto before the shooting, according to authorities.

Biden ordered a review of violent domestic groups in January.

White House Press Secretary Jen Psaki said at the time the administration wants “fact-based analysis, upon which we can shape policy”. 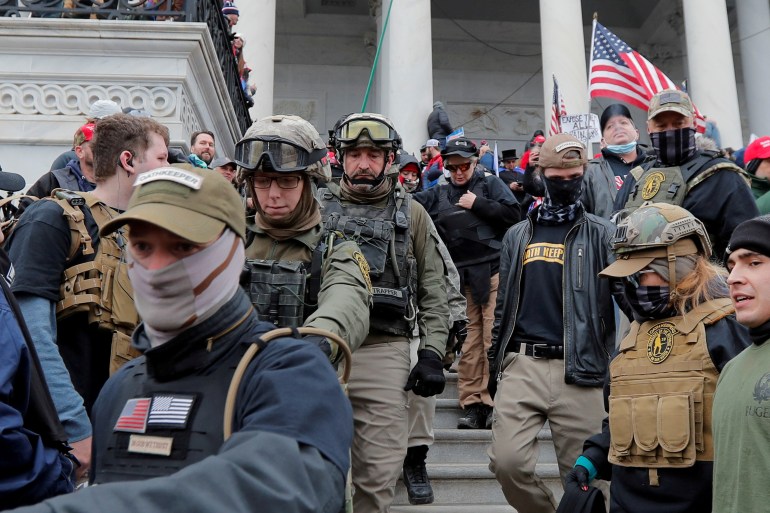 The Oath Keepers militia group marches down the east front steps of the US Capitol among supporters of then-President Donald Trump on January 6, 2021[File: Jim Bourg/Reuters]Militias, which are not generally motivated by racial bias, have gained notoriety in recent years.

Experts noted after the January 6 riot that while militias have been historically anti-government, Trump’s policies on gun control and hardline immigration stance made the armed groups more likely to support him.

The report concluded that “escalating support from persons in the United States or abroad, growing perceptions of government overreach related to legal or policy changes and disruptions, and high-profile attacks spurring follow-on attacks” could cause the threat of violence to increase in 2021 and beyond.