Their message was almost identical to one they delivered from outside the Capitol last week and echoed their take on almost every other issue Biden touches. This time, they had a new backdrop — next to railroad tracks and on desert terrain right along the border.

“It’s more than a crisis. This is a human heartbreak,” McCarthy said at a press conference with the delegation lined up behind him. “The sad part of all of this is it didn’t have to happen. This crisis is created by the presidential policies of this new administration. There’s no other way to claim it than a Biden border crisis.”

In February, U.S. border agents apprehended more than 100,000 migrants — a 28 percent increase from the previous month, according to agency statistics. The majority of those migrants are sent back. And officials say a chunk of those migrants are repeat crossers who have been expelled in the past, not new migrants.

CBP also took into custody nearly 9,500 unaccompanied children in February, a 61 percent increase from January. And those numbers are projected to be significantly higher for March, as officials have already seen dramatic increases in the first half of the month. 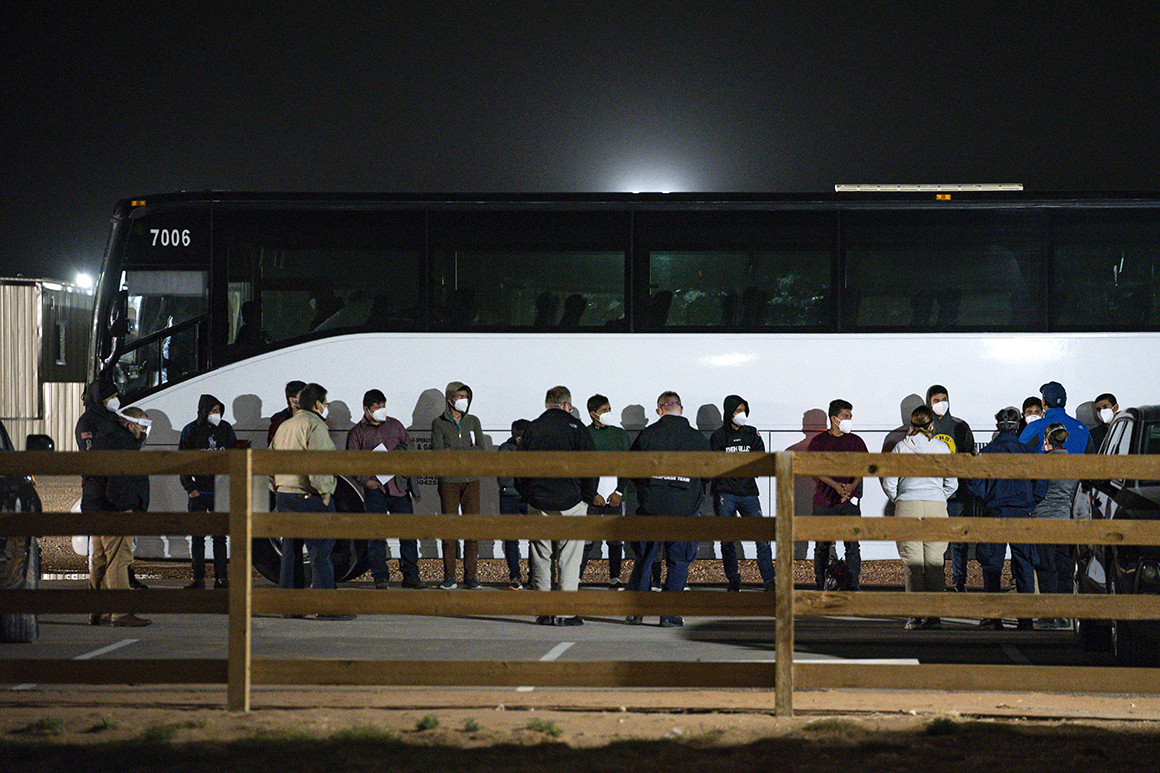 Migrant children and teenagers are processed after entering the site of a temporary holding facility south of Midland, Texas, on March 14, 2021. Teenagers began arriving Sunday at a converted camp for oilfield workers where volunteers from the American Red Cross will care for them. | Eli Hartman/Odessa American via AP, File

McCarthy and the delegation ticked off their concerns with the rising numbers of migrants arriving at the U.S.-Mexico border: They argue that Biden has thrown open the borders and now Americans are at increased risk for coronavirus from migrants crossing over. More illegal Fetanyl is crossing over. More migrants from Iran and Haiti are crossing over. And more migrant children are vulnerable to sex trafficking.

McCarthy’s delegation did not offer concrete policy solutions, however. Nor did they offer evidence to back up their claims. And officials and community leaders here insist their claims are alarmist and don’t accurately capture what’s happening here; Central Americans fleeing poverty and violence are the ones flocking to the border.

“Can we just agree not to use these human beings in front of us as political pawns? Let’s just make sure they’re taken care of,” said Ruben Garcia, director of El Paso’s Annunciation House, one of the largest shelter networks in the country.

Still, the visit made clear that Republicans are taking over Trump’s playbook as they eye their best path to winning back the majority in Congress in the 2022 midterm elections. It’s a reminder that Biden likely won’t find Republican allies on immigration — a hot-button issue he has prioritized since day one in office.

At the same time, the Biden administration is working to build the “fair and humane” immigration system the president promised on the campaign trail. However, Biden is running up against a major challenge. Thousands of unaccompanied minors — children and teens — are arriving at a pace faster than the administration can move them out of the custody of U.S. Customs and Border Protection and into shelters where they await to be united with vetted sponsors. Over the weekend, the Biden administration mobilized FEMA to help with processing the children.

Republicans for weeks have sharply criticized Biden for his efforts during his first 50 days in office to undo some of Trump’s immigration policies, such as slowly admitting migrants who were part of the Remain in Mexico program, which forced asylum seekers to stay in Mexico while they wait for their U.S. cases to be heard.

Republicans also argue that Biden is sending the message that the border is open, which it is not. The border remains largely closed as Biden continues to use a public health authority that Trump invoked in March 2020 to allow for migrants apprehended at the border to be immediately expelled due to the pandemic. Biden has only opted to make an exception for unaccompanied children. Some families arriving with small children are also being allowed to stay, due in large part to a new law in Mexico that’s stopping them from taking in small children.

Meanwhile, Biden is also taking heat from progressives, who worry he’s taking too long to reform the U.S. immigration system and is also treating migrant children inhumanely. Their concern is largely centered around the unaccompanied migrant teens and children being held in CBP detention cells for longer than the 72-hour maximum allowed by law.

Homeland Security Secretary Alejandro Mayorkas himself has said: “A Border Patrol facility is no place for a child.” But minors are being held in CBP custody as they wait for beds to open up in shelters. The Biden administration for days now has been scouting different locations they could fashion into temporary overflow shelters to make more beds available, according to White House officials and immigrant advocates tracking the situation. They’re also looking for ways to cut red tape or practices that make it harder to quickly place minors with vetted sponsors. 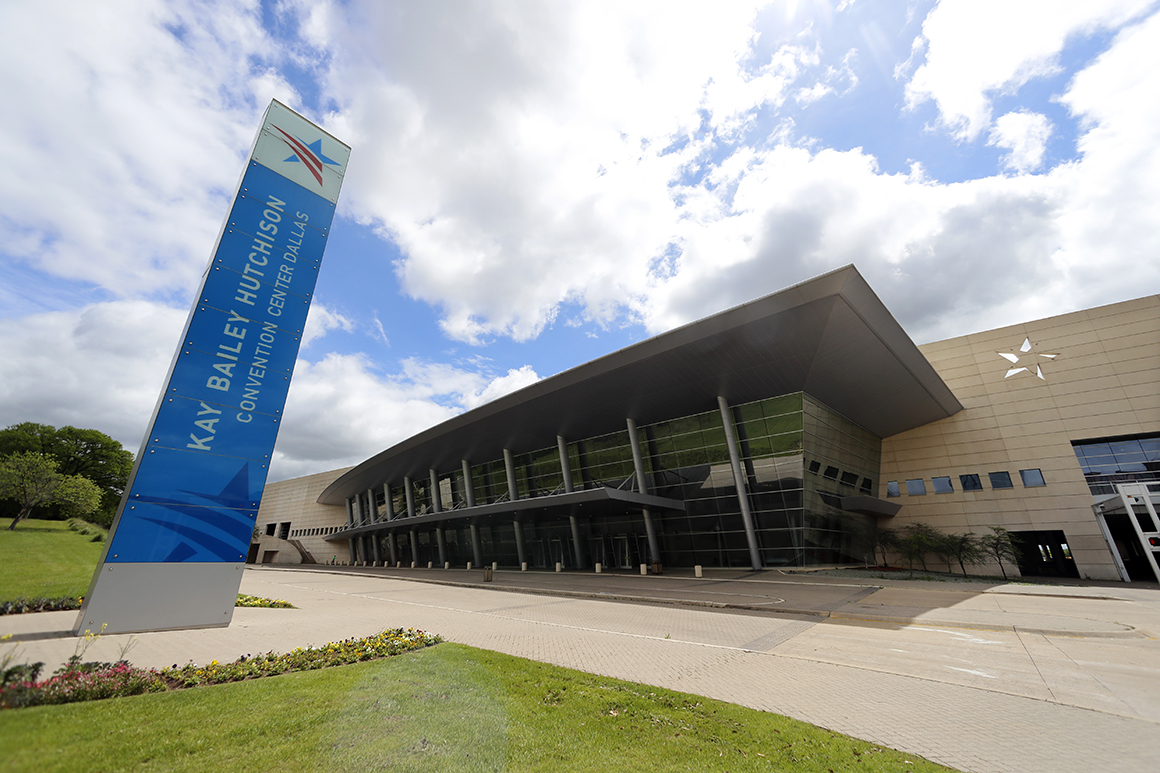 A sign sits in front of the Kay Bailey Hutchison Convention Center in downtown Dallas, Texas. The U.S. government wants to house up to 3,000 immigrant teenagers at the center as it struggles to find space for a surge of migrant children who have inundated the border and strained the immigration system just two months into the Biden administration. | Tony Gutierrez/AP Photo

White House press secretary Jen Psaki on Monday defended the president’s handling of the situation: “We have a lot of critics but not many of them are bringing forward solutions.”

Community leaders and Democrats here argue that Republicans are trying to manufacture a crisis that’s not there for political gain, as most migrants are still being kicked out and those being allowed to stay are being processed in El Paso in an orderly fashion.

Garcia said he’s grateful to see the Biden administration adopting a more humanizing and migrant-friendly tone and language than the Trump administration, but he doesn’t expect Republicans to stop using that anti-immigrant, inflammatory language.

“They saw the political gain that Trump was able to make by doing that,” Garcia said.

Rep. Veronica Escobar, a Democrat representing the area the delegation is visiting, slammed the group for opting to “follow the Trump playbook and continue in their messaging of hate, racism and xenophobia” without “bringing true solutions to the table.”

Escobar also was quick to shut down the use of the phrase “border crisis” to describe the current situation at the border, explaining it minimizes the years of officials in Washington failing to pass legislation.

“I bristle when I hear it because it’s a way to ignore everything else, like: What is it that’s driving immigration? Why have we failed to pass laws to fix this very broken system?” Escobar said. “It’s a way to not focus on the failures that brought us to this moment — a moment that has lasted years.”