That’s it for today folks. Thanks for sticking around, I hope you have a lovely Sunday wherever you are!

A case reported yesterday from Victoria has been reclassified

Yesterday’s positive case in an international air crew member has been reclassified and removed from Victoria’s case numbers.

Further testing and information received yesterday indicates this was a case of intermittent shedding from a past infection overseas. The case returned overseas on a flight last night.

A total of 727 COVID-19 vaccination doses were administered yesterday at hospital vaccination hubs across Victoria.

This brings the total number of vaccine doses administered in Victoria since the program started on Monday 22 February to 13,578.

The West Australian government has announced an expansion of its COVID-19 vaccination program, with nine clinics set to open in the next week.

Regional clinics in Broome, Albany, Esperance and Port Hedland will also open in the coming week.

Mr McGowan said the clinics would distribute the AstraZeneca vaccine.

“Our rollout of vaccines is proceeding at pace, and we’re very pleased that we’re able to establish these clinics all over Western Australia over the coming week for people in the first two phases — 1A and 1B — to get themselves vaccinated,” he said. 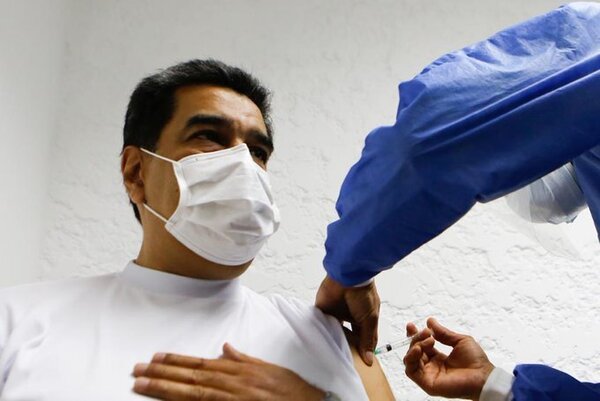 A video published by Mr Maduro’s own Twitter account showed the President and his wife, Celia Flores, getting the shot in the capital city Caracas on Saturday.

“They say you come out speaking Russian,” Mr Maduro joked while waiting for the vaccine, wearing a face mask and a white t-shirt.

“I am vaccinated,” he then declared to the camera, raising a finger in the air.

Moments after the video was published, state television showed the arrival of a second shipment of 100,000 doses of Sputnik V.

Mr Maduro said 60 per cent of the doses from the first shipment of the Russian vaccine had already been applied.

The government would start distributing 500,000 doses of the Chinese-made Sinopharm vaccine from Monday, he said. 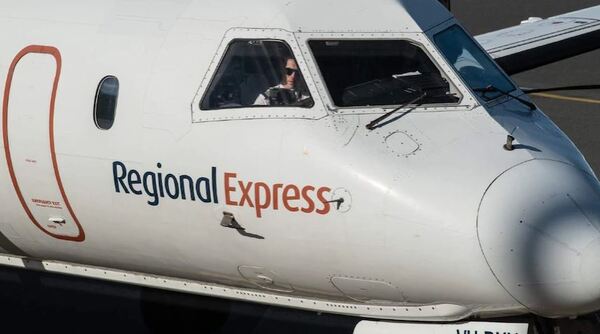 Rex is the first independent airline to have a crack at the route in 15 years, and also plans to begin flying from Sydney and Melbourne to the Gold Coast, and Adelaide to Melbourne, in the coming weeks.

While the COVID-19 pandemic has devastated global aviation, former Qantas chief economist Tony Webber said it had also created a “perfect opportunity” for a new domestic player in Australia.

“I think it’s the perfect time for them to come into the market because Qantas is weakened, Virgin is weakened, and Rex has been highly profitable for many, many years,” he said.

Hi, the Canberra cases, was the Singapore flight via Sydney, or direct to Canberra?

Hi Shaza, it was direct to Canberra.

There have been two new cases of COVID-19 recorded in hotel quarantine in Canberra, bringing the total number of active cases in the ACT to four.

The two travellers arrived on a repatriation flight from Singapore on Monday.

Two other passengers from the flight — a man aged in his 40s and another male aged under 20 — have already tested positive to the South African variant of the virus.

The latest case includes a woman in her 40s who contracted it from a family member (the male aged under 20) who she has been quarantining with.

The second case is a man in his 40s who was sitting in an adjacent row to an infected passenger on the repatriation flight.

All four cases are being cared for in a separate area of the hotel away from other returned travellers.

A Victorian Opposition frontbencher says the continued pause on international flights into the state shows the government does not have confidence in its systems to manage COVID-19.

The international intake was “paused” indefinitely during February’s snap five-day lockdown, and Premier Daniel Andrews has said he is awaiting advice on the impact of new strains of the virus before starting flights up again.

“So we’ve got these policies the government has put in place that despite the fact they tell us how successful they are, have clearly been unsuccessful.

“And the government’s decision to ban international travellers from coming into Victoria … is an implicit recognition that they have no faith whatsoever in their ability to keep transmissions confined.”

On Friday, Deputy Chief Health Officer Allen Cheng suggested flights may resume once all staff working in the hotel quarantine system had been vaccinated.

SA Health says the result is still being investigated, and could be from a medi-hotel resident, or an old case that is still “shedding”.

But Deputy Public Health Officer Chris Lease says it’s a timely reminder that people with symptoms should be tested, with numbers dropping in recent times.

The city is currently celebrating the Adelaide Festival, Fringe Festival and Womad, with authorities reminding people to ensure COVID safe practices while attending these events.

There are no new cases in South Australia today, with three active cases remaining in medi-hotels.

More than 2,200 people were tested yesterday.

The Dalai Lama has been vaccinated 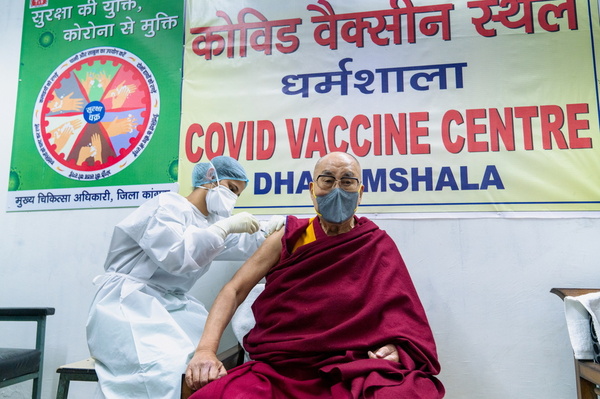 Office of his holiness the Dalai Lama via Reuters

The Dalai Lama, the 85-year-old Tibetan spiritual leader, has received the first shot of the coronavirus vaccine at a hospital in the north Indian hill town of Dharmsala.

After receiving the injection, he urged people to come forward, be brave and get vaccinated.

Dr G.D Gupta of Zonal Hospital, where the shot was administered, told reporters that the Dalai Lama was observed for 30 minutes afterward.

Ten other people who live in the Dalai Lama’s residence were also vaccinated, Dr Gupta said. All eleven received the Covishield vaccine, which was developed by Oxford University and UK-based drugmaker AstraZeneca, and manufactured by India’s Serum Institute.

A small update on the two hotel quarantine cases in Canberra

ACT health authorities are working with the New South Wales government and Singapore Airlines to work out how two people contracted the South African strain of COVID-19.

A man in his 40s and another aged under 20 have been in hotel quarantine in Canberra since arriving last Monday on a flight from Singapore. Genomic testing has confirmed they have the South African variant. The other 144 passengers on the flight have been re-tested with results expected today.

We don’t have a confirmed time for that yet.

Children in US encouraged to burn face masks at protest 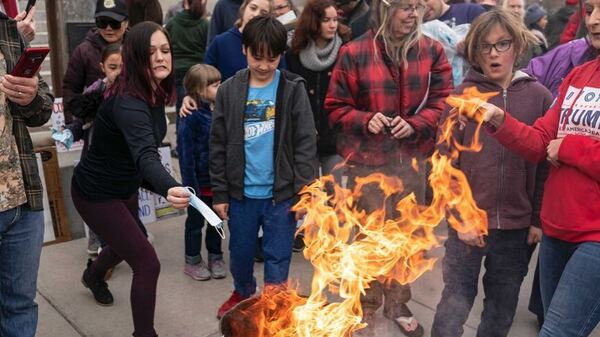 At least one hundred people have gathered at the front of the Idaho Capitol in the US to burn masks in a protest against measures taken to limit infections and deaths caused by the coronavirus pandemic.

Some groups said mask mandates are a restriction of their freedoms.

When will you get the COVID-19 vaccine?

Who has received the vaccine so far? How do you get notified to come and get it?

Hi Prue, I have just the resource for you. 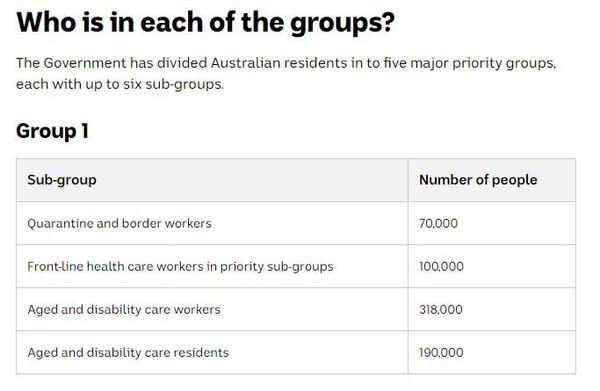 Group 1 are currently being vaccinated. You can check what group you’re in here.

How will I know when it’s my turn?

The federal government says it’s running a public information campaign across television, radio and digital platforms to tell Australians when, how and where to get the vaccine.

It says Australians will be able to check online if they are part of the current priority group at that time. There will also be a COVID-19 Vaccination Helpline for advice.

Today Dr Brendan Murphy said soon in about one week’s time, there will be an eligibility tracker on the government’s health website (health.gov.au).

He says people can “go in and put in their age and other factors and find out when they are eligible and even register interest.” 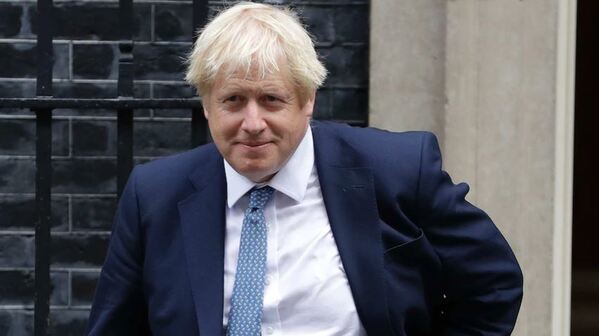 The reopening of England’s schools to all pupils on Monday will mark the first step back towards normality, and is only possible because of the efforts of the public to bring COVID-19 infection rates down, British Prime Minister Boris Johnson said.

Mr Johnson has announced a roadmap for lifting lockdown measures that sees schools open first, followed in later stages by the gradual easing of restrictions on mixing with other people and the re-opening of non-essential shops and other venues.

In the final stage, which will take place no earlier than June 21, the government hopes to remove all remaining legal limits on contact with others.

“The reopening of schools marks a truly national effort to beat this virus,” Mr Johnson said.

“It is because of the determination of every person in this country that we can start moving closer to a sense of normality, and it is right that getting our young people back into the classroom is the first step.”

Each step on the roadmap will depend on the level of COVID-19 cases, the government has said. It hopes the pandemic can be contained by a vaccine program that has already delivered a dose to nearly 22 million people, as well as regular testing.

Many secondary schools and colleges had already started inviting students for their first “lateral flow” COVID-19 tests, which give rapid results, with nearly 1 million conducted last week, the government said.

After three initial tests on site, students will be provided with two tests to use each week at home, it said, adding that nearly 57 million tests had been delivered to schools and colleges across the country. 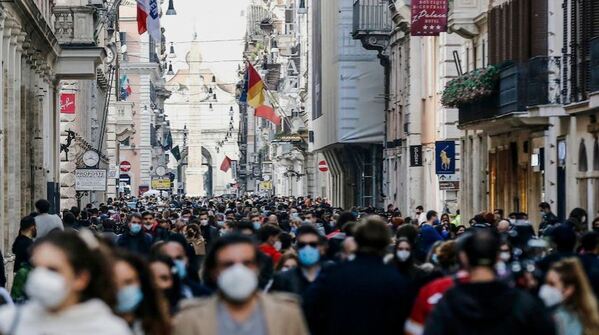 The World Health Organisation (WHO) says coronavirus variants first identified in South Africa, the United Kingdom and Brazil are powering the uptick in infections across the continent.

WHO’s regional director for Europe, Hans Kluge, added on Thursday that the increase — up 9 per cent last week from the previous week — was also being driven by “the opening of society, when it is not done in a safe and a controlled manner”.

The variant first found in the UK is spreading significantly in 27 European countries monitored by WHO and is dominant in at least 10 countries: the UK, Denmark, Italy, Ireland, Germany, France, the Netherlands, Israel, Spain and Portugal.

WHO experts warn it is up to 50 per cent more transmissible than the virus that surged last European spring and again in the autumn, making it more adept at thwarting measures that were previously effective.

The state is close to almost 50 consecutive days without a locally acquired case.