National Guard troops and Capitol Police remained vigilant around the US Capitol on Friday as concerns remained over reported militia plans to storm the seat of government in a repeat of the January 6 riots as lawsuits and court hearings continued.

Capitol Police and the FBI said they gathered intelligence that the Three Percenters, an anti-government militia whose name is based on the dubious claim only 3 percent of residents of the then-colonies resisted British rule in the US Revolutionary War, planned to attack the US Capitol on or around March 4.

Capitol Police were not immediately available for comment on the security situation on Friday.

The plot appears to be connected to a theory by the QAnon conspiracy movement, which believes former President Donald Trump is chosen to defeat a cabal of global liberal elites who harvest children’s blood to stay young. 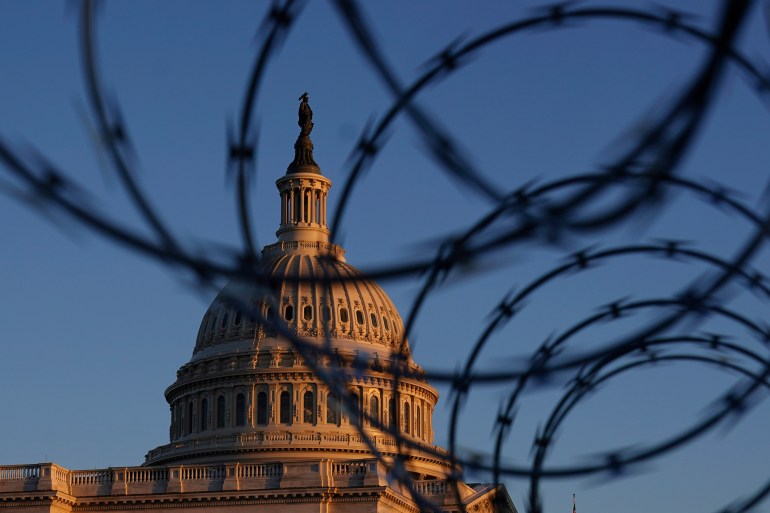 The Capitol is seen through razor wire at sunrise in Washington, DC, Friday, March 5, 2021 [Carolyn Kaster/AP Photo]QAnon adherents and more in the far-right movement believe Trump won last year’s presidential election, but it was stolen from him by global elites who favoured President Joe Biden.

Encrypted chat channels frequented by purported QAnon adherents said the reports were a “false flag” meant to entrap them.

The reports came as the Capitol Police and the FBI faced congressional questioning as to how far-right “extremists” were so easily able to breach defences on January 6. The riot left five dead, including a police officer.

The US Capitol has been wrapped in protective fences and barbed wire and flanked by military troops since the riot. National Guard troops were requested by Capitol Police to remain in DC for an extra 60 days.

The US continues to grapple with the legal fallout from the January 6 riot, as two of the most infamous accused rioters had their days in court this week.

Jacob Chansley, known as the “QAnon Shaman”, was seen in court at a status hearing on Friday, four days after Assistant US Attorney Kimberly Paschall, the prosecutor on the case, filed a motion against his request for pretrial release.

Chansley told CBS News on Thursday his actions on January 6 were not an attack.

Richard Barnett, the man pictured inside House Speaker Nancy Pelosi’s office, with his feet on her desk, was in court on Thursday. NBC4 reporter Scott McFarlane said on Twitter Barnett was “screaming” at court officials over being held in pre-trial detention for a full month.

Further information about the hearing was not immediately available in court records.

More than 300 people have been arrested in relation to the January 6 riot, according to the Justice Department.

Meanwhile, another lawsuit aiming to hold Trump responsible for the riot was filed on Friday by Democratic Representative Eric Swalwell.

The suit, filed in a civil court against Trump, his lawyer Rudy Giuliani and other allies, alleges the riot was a “direct and foreseeable consequence” actions by Trump, Giuliani, Trump’s eldest son, Donald Trump Jr, Republican Congressman Mo Brooks and others.

“As such, the Defendants are responsible for the injury and destruction that followed,” Swalwell claims in the lawsuit.

Trump was impeached a historic second time over claims a speech he gave to supporters on January 6 incited the riot.

A Senate trial that took place after he left office failed to convict the former president.