On March 1, 2021, the Iraqi parliament passed the The Yazidi [Female] Survivors Bill (the Bill), a law aimed at providing assistance to survivors of the Daesh atrocities. In 2014, Daesh, a terror organization, unleashed genocidal atrocities against religious minorities: Yazidis, Christians and others. 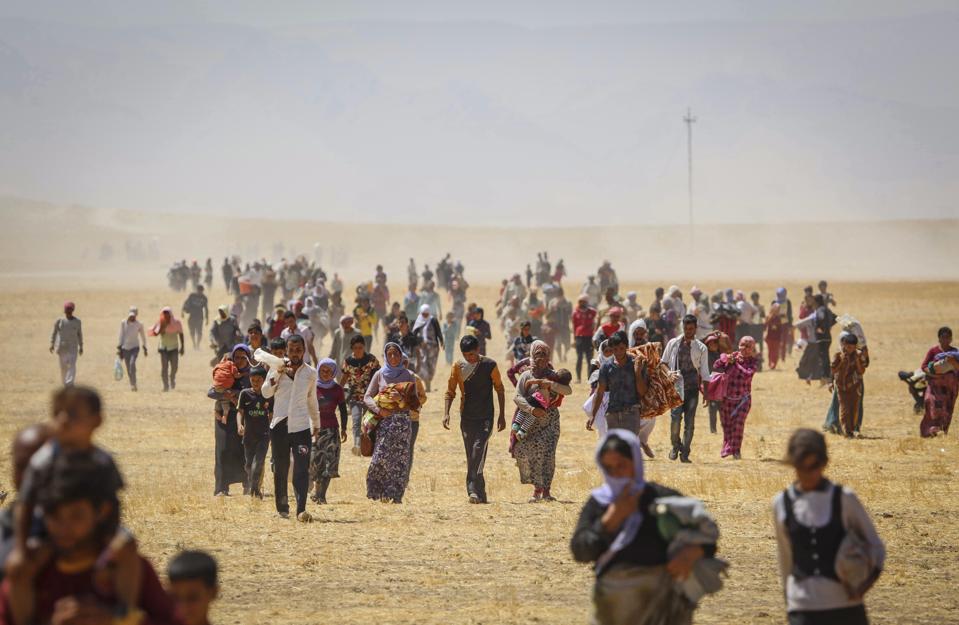 Thousands of Yazidis trapped in the Sinjar mountains as they tried to escape from Daesh are rescued … [+] in Mosul, Iraq on August 09, 2014. (Photo credit: Emrah Yorulmaz/Anadolu Agency/Getty Images)

One of its largest attacks began on August 3, 2014. On that day, Daesh launched a violent attack against Yazidis in Sinjar. Daesh fighters killed hundreds, if not thousands of men. As part of the same campaign, Daesh fighters abducted boys to turn them into child soldiers and women and girls for sex slavery. More than 3,000 women and girls are still missing and their fate is unknown. A few days after the attack on Sinjar, Daesh also attacked the Ninevah Plains and forced over 120,000 people to flee for their lives in the middle of the night. The atrocities are being classified as genocide. Daesh brought about this genocide by way of murder, enslavement, deportation and forcible transfer of populations, imprisonment, torture, abduction of women and children, exploitation, abuse, rape, sexual violence – unabated. Daesh specifically targeted religious minorities, including Muslim minorities, for destruction in an attempt to annihilate religious pluralism and establish a purely Islamic region, in accordance with its perverted interpretation of what this would involve.

The newly adopted Bill is aimed at providing assistance to

“1. Every Yazidi [female] survivor kidnapped by Daesh and was freed afterwards.

2. women and girls from the (Turkmen, Christian, Shabak) components who were subjected to the same crimes mentioned in Article 1 [ namely, every woman or girl who has been subjected to crimes of sexual violence from her kidnapping, sexual slavery, selling her in slavery markets, separating her from her family, forcing her to change her religion, forced marriage, pregnancy and forced abortion or inflicting physical and psychological harm to her by [Daesh] since the date [August 3, 2014] and was freed afterward].

3. Yazidi children survivors who were under the age of eighteen at the time of their kidnapping.

4. Yazidi, Turkmen, Christian and Shabak survivors from the mass killings and mass elimination carried out by [Daesh] in their areas.”

This law aims to provide survivors with compensation to secure “a decent life for them.” The law further aims to ensure that survivors are provided with rehabilitation and any other assistance needed to help with their integration into society and prevent the recurrence of the violations.

Welcoming the Bill, Nadia Murad, Nobel Peace Prize Laureate and UNODC Goodwill Ambassador, said: “[the] passage of Iraq’s Yazidi Survivors Bill is an important first step in acknowledging the gender-based trauma of sexual violence and need for tangible redress. Implementation of the law will need to be focused comprehensively supporting and sustainably reintegrating survivors.” The Bill is an important step toward assistance and justice for survivors of the Daesh atrocities – assistance and justice that have been neglected for too long.