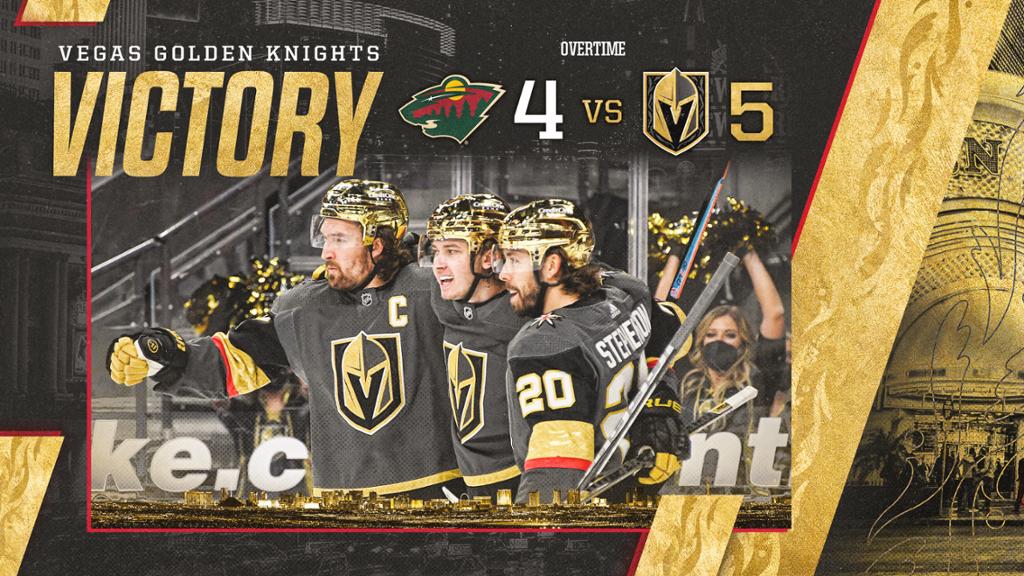 Mark Stone set a franchise record with five assists as the Vegas Golden Knights (13-4-1) came back from 4-2 down to defeat the Minnesota Wild (12-6-1), 5-4 in overtime on Monday night at T-Mobile Arena.

HOW IT WENT DOWN
Though the first period passed without a goal, familiar energy returned to T-Mobile Arena as fans were permitted to attend the game for the first time in 363 days. In the second, Stone set up Cody Glass for his third power-play goal of the season. Jordan Greenway and Marcus Foligno scored back-to-back goals to give the Wild a 2-1 lead, but a power-play strike from Max Pacioretty knotted the score at 2-2. Late in the middle frame, Nick Bonino and Foligno scored 19 seconds apart to give Minnesota a 4-2 advantage. Goals from Nic Hague and Alex Tuch tied the game for the Golden Knights as the two teams went to the extra session. Stone fed Pacioretty two minutes into overtime for the game-winning goal as the Golden Knights sent their fans home happy with a 5-4 win.

STAT OF THE KNIGHT
All five of Stone’s assists in the game were primary assists. He leads the Golden Knights in helpers (18) and points (22).

BECAUSE VEGAS WON…
All VGK fans can pick up a free Jumbo Jack from any Jack in the Box in Las Vegas with the purchase of a large drink.

LOOKING AHEAD
The Golden Knights and Wild close out their two-game set Wednesday at 7 p.m. at T-Mobile Arena. Catch the game on AT&T SportsNet, FOX Sports Las Vegas 98.9/1340 and Deportes Vegas 1460. Click here for ticketing information.