The thrills and chills of the big screen are back big time in the world’s largest film market.

With the coronavirus well under control in China and cinemas running at half capacity, moviegoers are smashing China’s box office records, with domestic productions far outpacing their Hollywood competitors.

February marked China’s all-time biggest month for movie ticket sales, which have so far totalled 11.2 billion yuan ($1.7bn). China overtook the United States as the world’s biggest market for movie ticket sales last year as the US box office took a massive hit from the closure of cinemas because of the pandemic.

Chinese theatres were able to reopen by midyear and have seen steady audience growth since then. Local movies have also benefitted from periodic unofficial “blackout” periods, when only domestic productions are allowed to be screened. A dearth of major Hollywood blockbusters over recent months appears to have also boosted the market for Chinese films.

“People were encouraged to stay in Beijing for the Lunar New Year, and so watching movies in the cinema became the top choice of entertainment,” said Chu Donglei, marketing manager at Poly Cinema’s Tiananmen branch in central Beijing.

Mask wearing is mandatory and moviegoers must register with a mobile phone app so they can be traced in the event of an outbreak. Only every other seat is allowed to be occupied, making it even harder to obtain tickets for the most popular films.

According to the China Movie Data Information Network, 95 percent of ticket sales came from the seven top-grossing films timed for release around the Lunar New Year festival, which began this year on February 12. 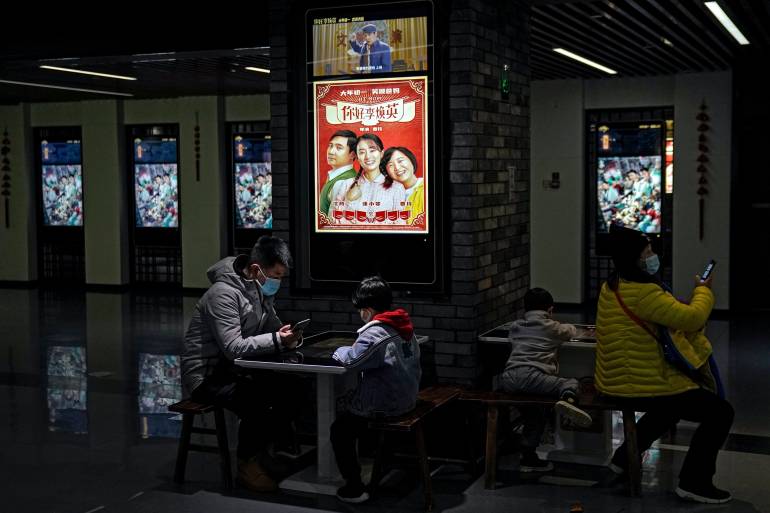 China last year overtook the United States as the world’s biggest market for movie ticket sales as the US box office took a massive hit from the closure of cinemas because of the coronavirus pandemic [File: Andy Wong/AP Photo]Wang Xiaoyu, 32, who works in the film industry, was only able to procure a ticket for Hi, Mom on Thursday and called the viewing experience “deeply moving”.

“I know there are some movies that are released and streamed online. But I think the experience of watching movies online is not as good as that of watching in a cinema,” Wang said.

A lack of entertainment options helped pump up ticket sales during the pandemic, foretelling a bright future for the Chinese film industry, Wang said.

“During the Lunar New Year, there were films with a variety of genres and topics and the audiences were satisfied,” Fu said. “Even with the impact of the pandemic and the increase in ticket prices, we were still able to score such achievements.” 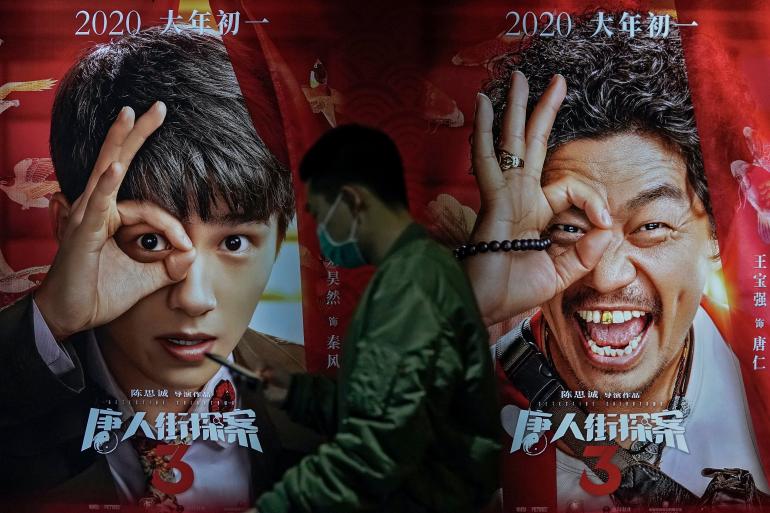 February marked China’s all-time biggest month for movie ticket sales, which have so far totalled 11.2 billion yuan ($1.73bn) [File: Andy Wong/Reuters]“I’m bored, and you can’t stay at home watching [streaming service] Douyin all the time, so I came to the cinema to watch a movie. There’s nothing to do,” said Zhang, who is on winter break and came to the cinema to see A Writer’s Odyssey, a Chinese fantasy film which he said he didn’t quite understand.

Last year, China sold an estimated $2.7bn in tickets compared to $2.3bn in the US, which saw an 80 percent drop in ticket sales. The Eight Hundred, an action drama glorifying China’s resistance to Japanese invaders in 1930s Shanghai, was the world’s biggest hit, making $461.3m at the box office, most of it within China.

China’s theatres also closed for a time during the height of COVID-19 in the country last spring, but gradually reopened over the summer. As of Friday, China has gone 11 days without reporting a single new case of local transmission of the virus.

Since the outbreak was first detected in the central city of Wuhan in late 2019, China has reported a total of 89,877 cases, including 4,636 deaths.