Betting on Trump’s chance of success in 2024

While the now-infamous straw poll at the CPAC convention last weekend indicated a drop in enthusiasm for former President Donald Trump as the Republican candidate in 2024, some online betting sites came to the opposite conclusion.

Trump’s odds of being the GOP nominee at the online sportsbook SportsBetting.ag improved from 6/1 to 3/1, leapfrogging both Mike Pence and Nikki Haley and making him the clear frontrunner for the nod. Two sitting governors also saw their chances improve after their performances at CPAC, with Florida’s Ron DeSantis moving from 14/1 to 5/1, tied for second with Haley, and South Dakota’s Kristi Noem going from 69/1 to 40/1.

The situation was a bit more complicated on the PredictIt site, a pseudo stock market where users buy and sell shares of propositions and win $1 for each share if they’re right. The price for Trump fell during CPAC but nudged up a penny, to 26 cents, on Tuesday and he still leads handily. DeSantis is second at 16 cents as of early Tuesday afternoon.

As for the general 2024 election, Trump’s improved standing put him in third place — behind two Democrats. Vice President Kamala Harris and President Joe Biden are still the frontrunners, and in that order. SportsBetting.ag, for example, has Harris at 4/1 and Biden at 9/2, with Trump at 7/1.

But you have to look way down the list to find Gov. Andrew M. Cuomo, mired in allegations of sexual harassment among other problems. His odds of becoming president in 2024 are 150/1, the same as former British royal Meghan Markle, former Trump White House press secretary Kayleigh McEnany and Sen. Lindsey Graham, among others.

The markets, as they say, can be volatile.

Bellone is all aboard the North Atlantic Rail initiative

Suffolk County Executive Steve Bellone has cheerleaded for some development projects that have succeeded, and others that have failed.

But none has been as big as the North Atlantic Rail initiative, which would create a high-speed rail line between Boston and New York City.

“The most likely outcome anytime anything of significance … gets proposed on Long Island, is it gets killed,” Bellone told The Point. “I’ve implemented big projects … and I’ve seen multiple great ideas and projects die on Long Island. But I’ve not seen a project of this scale that is potentially doable. And I do think this is [doable].”

So far, Bellone is the most vocal local elected official to support the $105 billion project, which would use existing and new rail to create a high-speed train line that would go from Penn Station to Jamaica before heading east. Potential stops on the Island could include the Nassau Hub, Republic Airport, Ronkonkoma and Stony Brook. In a video call Monday in which The Point participated, former Regional Plan Association president Robert Yaro, the guru behind North Atlantic Rail, said planners also are now talking about adding a stop at Belmont Park to the mix.

After moving through Long Island, the train, which could travel at about 150 mph, would head north into a tunnel just before Port Jefferson village, under the Long Island Sound, and into Connecticut. The trip from New York City to Boston would take 100 minutes. Travel time from Ronkonkoma to Manhattan could be as short as 30 minutes and it would take just over an hour to go from Ronkonkoma to Boston.

In the Monday presentation, Bellone joined Yaro, Hartford Mayor Luke Bronin and other project supporters to advocate for a massive federal infrastructure bill that could provide the funding needed to get the North Atlantic Rail going. Among the advocates: Dave Kapell, working through the Right Track for Long Island Coalition that was initially formed to push forward the Long Island Rail Road’s third track.

During that conversation, Bellone said he recognizes the challenge of building high-speed rail across Long Island, and the likelihood of local opposition. But doing such a project and not including Long Island, he added, “would just be an absolute tragedy.”

And Kapell told The Point that even the difficult battle on the third track project wouldn’t stop him from fighting for this, too.

“Bring it on,” Kapell said. “This is the battle of a lifetime. It could change everything for everybody for the better.”

Bellone told The Point that he hopes to work to build a coalition of elected officials, advocates and residents to build support for the effort. He is talking with the Island’s congressional delegation, and has spoken with Senate Majority Leader Chuck Schumer’s transportation adviser, Robert Hickman.

So, could the North Atlantic Rail be Bellone’s next big project? After all, he’s term-limited, and will be looking for a new job come 2022.

“I have no grand plans around that,” Bellone said. “Obviously, this is a project I am going to continue to support and I would love to see happen, as a Long Islander … But this is an extension of the work we’ve been doing to try to have a sustainable economic development plan … It’s an extraordinary thing. If an opportunity comes up that is plausible, not to try to seize that would be a dereliction of duty.” 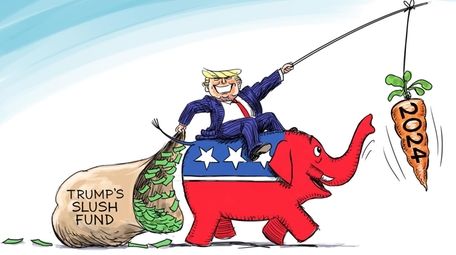 The multimillion-dollar lobbying industry in New York City appears to be more or less pandemic-proof.

Total compensation of reported NYC lobbying hit $106,338,507.28 in 2020, according to an annual report issued this week by the Lobbying Bureau of the Office of the City Clerk.

The annual city report is often a must-read for reporters and political junkies since it includes a collection of Top 10 lists ranking firms and clients in spending and compensation in various ways. This year’s edition includes Long Island behemoth Northwell Health, coming in at No. 8 in compensation to all retained lobbying firms by logging $459,015.70. No. 5 in compensation, at $562,457.72, was RXR Development Services LLC in Uniondale.