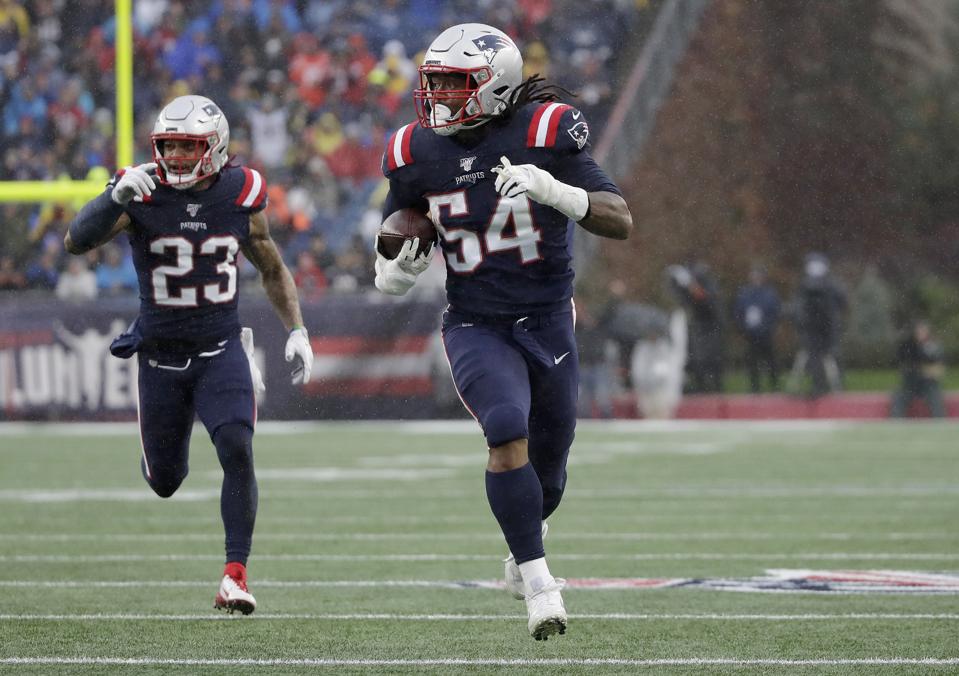 No NFL team saw more players opt out of the 2020 season due to Covid-19 concerns than the New England Patriots.

New England’s tally began with one and climbed to eight by the start of training camp. Pillars of the past decade as well as arrivals in free agency resided among them. And as contracts tolled and became $150,000 voluntary advances or $350,000 higher-risk stipends, well over $20 million in cap space opened.

The Patriots now near the new league year with north of $60 million projected after rollover. But also with reinforcements. All eight players who opted out plan to return for 2021, Ian Rapoport of NFL Media and Jim McBride of the Boston Globe reported in the final days of February.

Here’s how they factor back into the roster entering March. 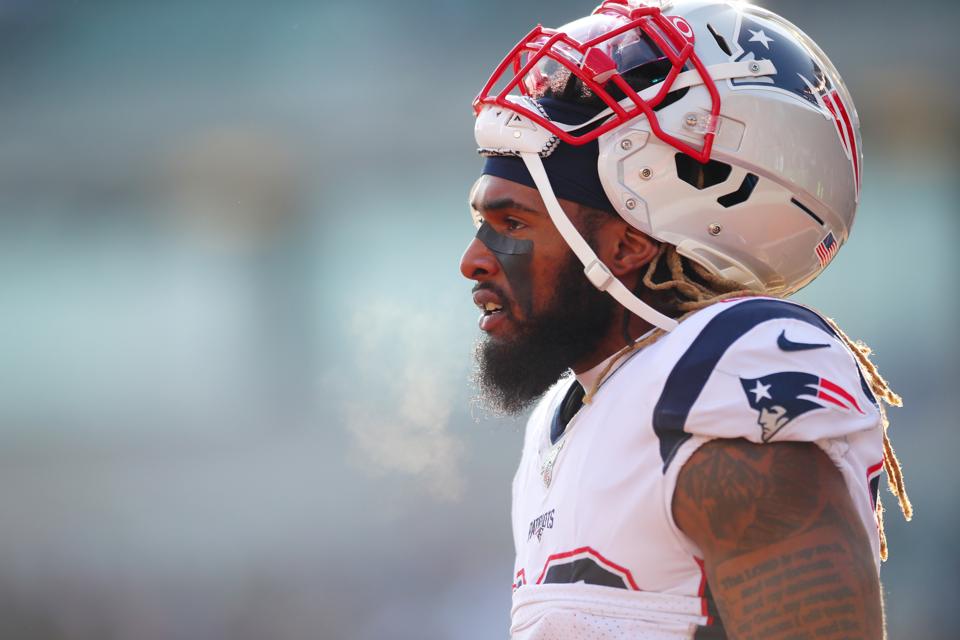 In 2019, running back Brandon Bolden scored four touchdowns and played 72% of the snaps on special … [+] teams for New England. (Photo by Bobby Ellis/Getty Images)

James White and Rex Burkhead are impending free agents. Sony Michel, Damien Harris and undrafted addition J.J. Taylor are on rookie deals. And in their backfield company is Bolden, whose core contributions on special teams included 72% of the workload during his most recent year. Though only 24 offensive touches were handled, 179 yards from scrimmage and four touchdowns also were by the Ole Miss product. There’s reason to believe that glue role in the kicking game, in blitz pickup and as a rusher and receiver will remain at a cap number below $2 million. Bolden had rejoined New England on a two-year pact after one season away with the Miami Dolphins. “I can’t tell you how happy I am to have Brandon back, and I think our team and our coaching staff feels the same way,” Patriots head coach Bill Belichick told reporters in 2019.

Vitale signed a one-year, $1.3 million contract with New England last March after stops with the Tampa Bay Buccaneers, Cleveland Browns and Green Bay Packers. But it was Jakob Johnson, an alumnus of the NFL International Player Pathway Program, who succeeded the retired James Develin at fullback from there. Vitale had starred as the superback at Northwestern, landing in the sixth round of the 2016 draft after an all-around career that spanned six carries, 135 catches, 1,456 yards and 11 touchdowns. Since entering the league, Vitale has appeared in 44 games while adapting to different offensive schemes and different definitions of the position. In New England, that position begins with Johnson, who is on track to be tendered as an exclusive-rights free agent.

Lee, the 2012 recipient of the Biletnikoff Award, signed a one-year deal with New England in the hours leading up to the NFL draft last April. It featured $300,000 guaranteed and qualified for the veteran benefit, signifying that his cap charge would check in lower than his base salary. Lee had been released by the Jacksonville Jaguars after his $38 million contract extension was derailed by season-ending knee and shoulder injuries. The ex-USC wideout caught 174 passes for 2,184 yards and eight touchdowns during his journey in Jacksonville. Lee will look to catch his next passes in Foxborough, where wide receivers Jakobi Meyers, N’Keal Harry, Julian Edelman, Gunner Olszewski, Isaiah Zuber, Kristian Wilkerson and Devin Smith are also under contract for 2021.

New England’s tight ends ranked last in the league in receptions over the course of 2020. Only the Carolina Panthers’ group totaled with fewer yards while the New York Giants’ group tied for the fewest touchdowns. It’s unlikely that LaCosse would have been the difference in a room that went forward with Ryan Izzo and rookies Devin Asiasi and Dalton Keene. But as an unrestricted free agent in 2019, the then-Denver Bronco garnered two years and $500,000 guaranteed to sign. LaCosse’s upcoming cap hit of $1.45 million should give him a chance to regain a 53-man roster spot with the Patriots. He caught 13 passes for 131 yards with one trip to the end zone during his first season in the offense. There were eight starts in 11 games. 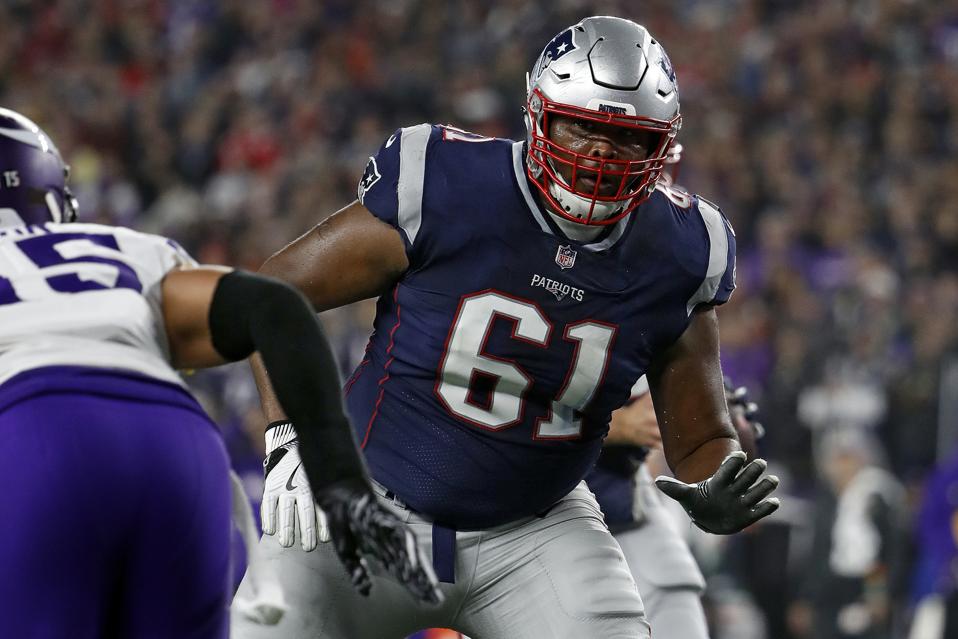 Offensive tackle Marcus Cannon has started 80 games, including playoffs, since arriving in the fifth … [+] round of the 2011 NFL draft. (Winslow Townson/AP Images for Panini)

Cannon’s contract runs through the next two seasons and brings a cap figure exceeding $9.6 million in 2021. According to OverTheCap.com, that figure ranks fourth on New England’s current books. Cannon had agreed to a restructure in 2019 and is set to turn 33 years old in May. His upcoming cash intake stands in the ballpark of $7 million. The 2011 fifth-round draft choice out of Texas Christian has made 80 starts, including postseason, during his Patriots tenure. But without Cannon last campaign, rookie Mike Onwenu looked the part as a starting option on the inside and outside of the offensive line. Onwenu, chosen No. 182 overall out of Michigan, surpassed 600 snaps at the right tackle spot that Cannon has long occupied. It could be a wait-and-see situation in training camp with the latter.

Toran signed to New England’s practice squad on Labor Day weekend in 2019. The UCLA Bruin remained through January, and was among seven players retained on futures contracts two days removed from the playoff exit. The contract now moves to 2021 for Toran, who faces uphill odds. Toran originally entered the league as an undrafted free agent with the San Francisco 49ers in 2018, and spent his rookie season between the scout team and active roster. He has yet to appear in an NFL game beyond the preseason. Yet with starting left guard Joe Thuney’s $14.781 million franchise tag in the rearview and starting center David Andrews also scheduled for free agency, movement is ahead on the interior line. Experienced reserves in Jermaine Eluemunor and James Ferentz have expiring Patriots deals, as well.

Hightower will be 31 in the days leading up to the new NFL year, and the 2012 first-rounder by way of Alabama will be integral in what follows. Between his time as a captain, as the green dot of communication and as an equal defensive part against the run and the pass, Hightower’s importance to the front seven only grew in his absence. Entering a contract year now, he is due a base salary of $8 million and is on track to account for close to $12.5 million versus the cap. A Pro Bowler and All-Pro two times and a Super Bowl champion three times, Hightower was named to New England’s All-Decade team last spring. How Ja’Whaun Bentley, Terez Hall and 2020 draft picks Josh Uche and Anfernee Jennings work into the linebacker depth chart around him will be worth monitoring.

Last May, Chung signed a two-year extension that created $925,000 in immediate cap space for the Patriots. It was enough space for the war room’s last unsigned draft selection, fellow safety Kyle Dugger out of Division II Lenoir-Rhyne, to ink his rookie deal. It was also the fifth time New England had adjusted terms with Chung since the 2009 top pick returned in 2013. But seeing his contract’s finish line would mean playing until age 37. What’s known is that Chung will be turning 34 in training camp while carrying just over $5 million against the cap. The hard-hitting Dugger is in his company at an area of the field where safety blends with linebacker, and the same goes for do-it-all signing Adrian Phillips. There should be a place for each those options in the defensive framework. During his second tour in New England, Chung has found his.