With relations between the governments of the US and Iran having become increasingly hostile during Donald Trump’s administration, the people of Iran followed the US Presidential election closely in the autumn of 2020. According to a new survey of Iranians, while the perceptions of Americans has been boosted since the elections, the simple installation of Joe Biden as President has done little to lift their expectations of US foreign policy toward their country.

Iran and the United States have had no formal diplomatic relations since April 1980 – and in the decades since, the US has imposed various embargoes and trade bans on the country. Relations looked set to improve in 2015, when the US led successful negotiations for a nuclear deal intended to dismantle Iran’s nuclear weapons capabilities. When Iran complied in 2016, sanctions on Iran were lifted by the US, during the second term of President Barrack Obama.

Like most of the other accords signed by Obama during his time in the Whitehouse, the agreement was quickly cast aside when Donald Trump shocked the pollsters to become his replacement. The Trump administration withdrew from the nuclear deal and re-imposed the sanctions in 2018, and since this time, relations between the two nations has drastically declined – even coming close to conflict during the 2019-20 Persian Gulf crisis. 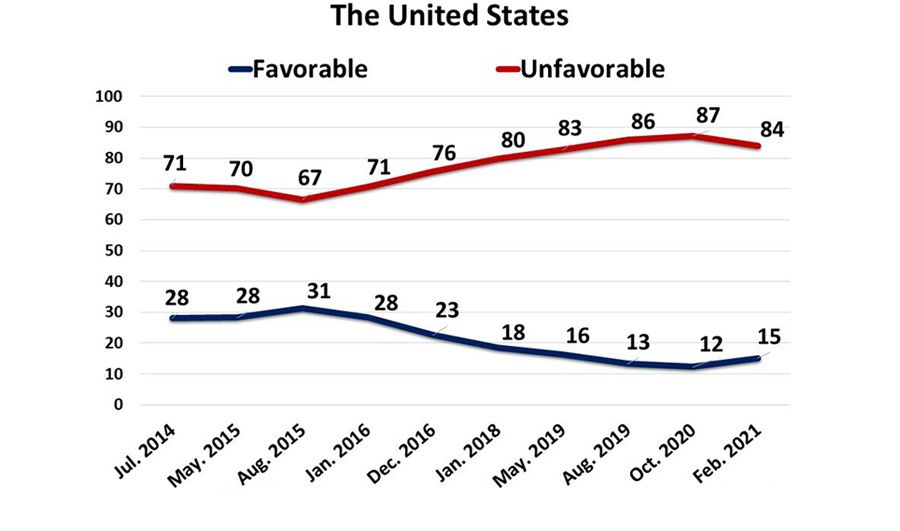 A 2019 survey by IranPoll found 13% of Iranians already had a favourable view of the US, with 86% expressing an unfavourable view – the least favourable perception of the US in the world. Both nations were pulled back from the escalating conflict by the outbreak of the coronavirus, however. In the intervening year, voters have been to the polls, and evicted Trump from the Whitehouse after a single term – the first time a President has been ousted in such a way since George Bush in 1992.

Whether the arrival of Joe Biden in the Oval Office necessitates a warming of relations between America and Iran remains to be seen, however. 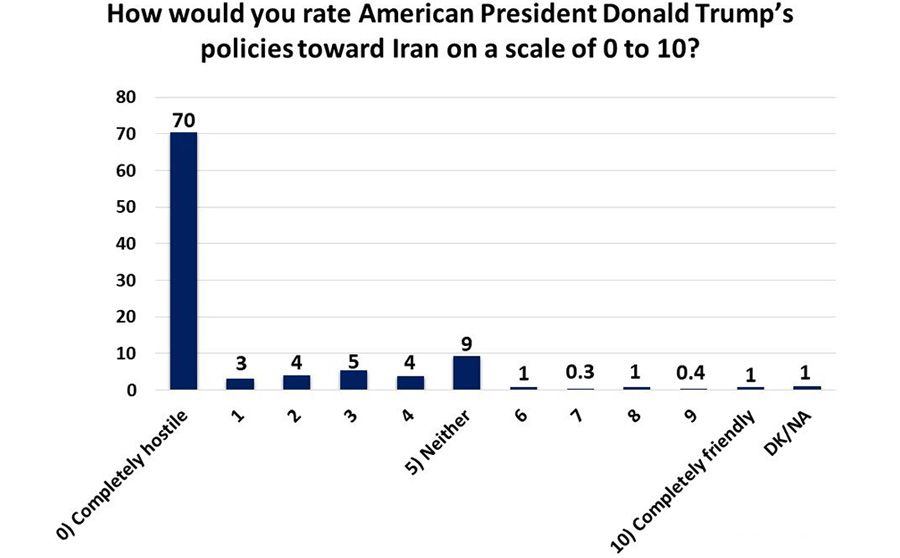 According to a new survey from IranPoll – polling 1,000 residents of Iran at the end of 2020 and the beginning of 2021 – around 71% of Iranians followed the US election closely throughout 2020, while 87% of Iranians are aware that Joe Biden won. While it would be wrong to say people were dancing in the streets at the news Trump had been ousted from power, this certainly has had a notable impact on Iranians’ views on average Americans.

The months of the Persian Gulf crisis saw favourability toward Americans among Iranians drop dramatically, with 55% of those polled saying they viewed people in the US negatively. While the 45% of Iranians who now view US citizens favourably is still some distance from the 53% before the crisis, it is arguably some recognition that voters have railed against a President who was openly hostile toward Iran.

With that being said, most Iranians remain unconvinced that the US as a state player has changed as a result of the election. A three-point dip in the number of Iranians who think of the US unfavourably might seem like progress, but considering the total still stands at 83% – having previously stood at 67% when the Obama administration brokered the nuclear treaty – this is not a dramatic improvement. 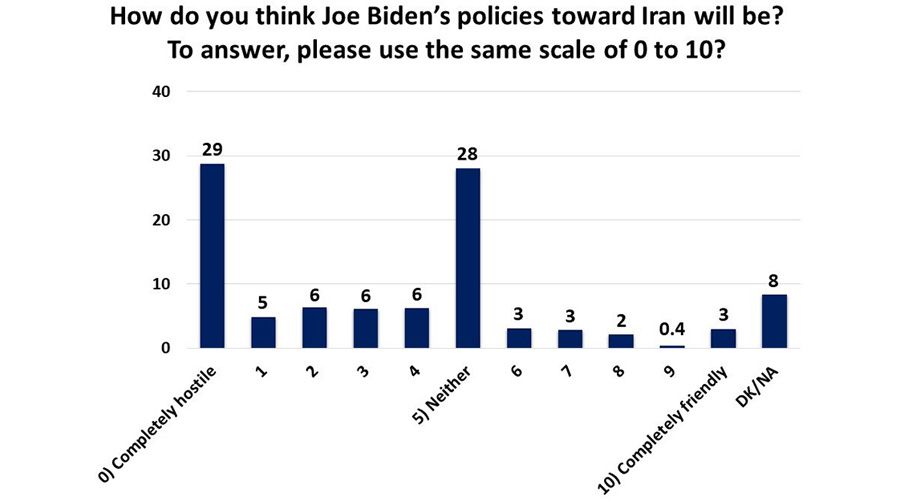 It is important to state that the poll shows signs Iranians perceive Americans and their government in differing terms then – and to that end, the distrust with which the new Biden administration is viewed is palpable. Around seven-in-ten Iranians described his predecessor as ‘completely hostile,’ and the largest minority of 29% still believe as much about the 46th US President.

Whether that is due to Biden’s reputation as a career politician who has appeared on either side of a multitude of issues depending on polling, or whether that is due to his administration’s apparently weak position – holding a slim majority in both its representative wings – it seems anything but guaranteed that his election will see relations return to the state they were in under Obama. To this end, a further 23% of those surveyed meanwhile stated that Biden is more likely to act in a hostile fashion than a neutral one, and fewer than 12% believe he will be more friendly than neutral.

So far, Biden’s administration has struggled to shake off the perception that it is, at best, ineffectual. Held back by infighting and hard-liners on the Hill, the administration may have squandered precious time to save the Iran nuclear deal, according to critics.

Speaking to Foreign Policy Kelsey Davenport, Director for non-proliferation policy at the Arms Control Association recently commented, “I think the Biden administration missed an opportunity in the first week of its term to send a stronger, more concrete signal of its good faith intentions to return to JCPOA. During the time it took for the Biden team to begin to be more proactive, positions hardened in Iran. I’m not surprised at the delay at this point. I think Iran expected swifter action. After all, because of Trump’s withdrawal, it’s the US that is responsible for the crisis around the Joint Comprehensive Plan of Action (JCPOA).” 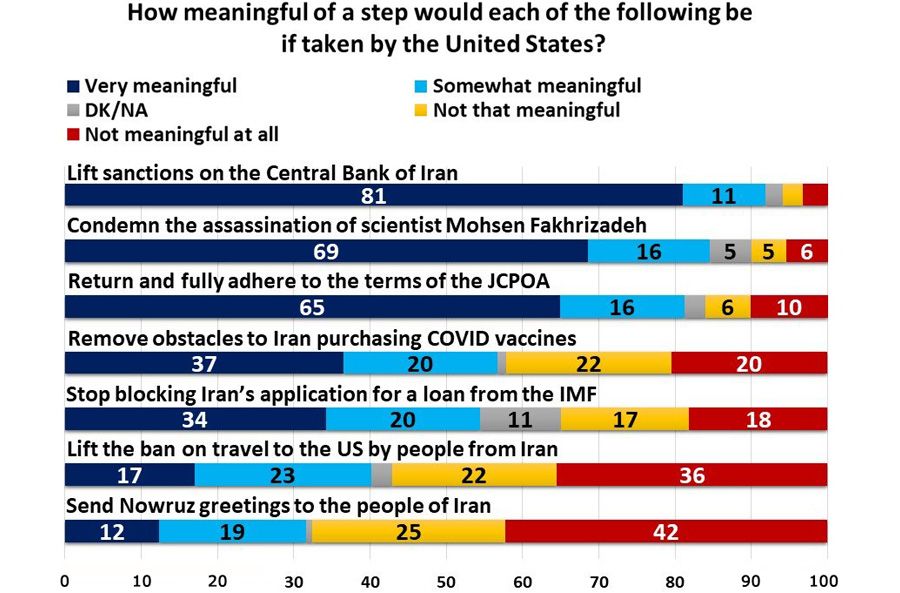 However, if Biden is to improve Iranian’s perceptions of his country, he will need to go further than this anyway. While 65% told IranPoll that returning to the full terms of the JCPOA would be “very meaningful,” a majority of 81% said they would find lifting the US embargo on the Central Bank of Iran, and 69% added that they would hold the condemnation of the assassination of scientist Mohsen Fakhrizadeh.

Likely due to his connections to Iran’s alleged nuclear weapons program, Fakhrizadeh was assassinated in a road ambush in Absard in November 2020. Although initially reported to be conducted by gunmen and a bomb, Iran’s government suggested the attack utilised an autonomous satellite-operated gun, and alleged Israeli involvement, raising tensions in the region. Biden has thus far not released such a condemnation, and considering the claims would be difficult to verify, and that Israel is considered a key ally in the Middle East, it seems unlikely he will offer one – simply stating it was “hard to tell” how much it had complicated his hopes of reaching a détente with Iran’s government.

Commenting on the findings, CEO of IranPoll Amir Farmanesh said, “The Iranian public has responded positively to Joe Biden’s arrival as US President. Majorities are willing to resume full compliance with the JCPOA, but only after, or at the same time as the US returns to and fulfils its obligations under the nuclear deal that Trump abrogated in 2018.”