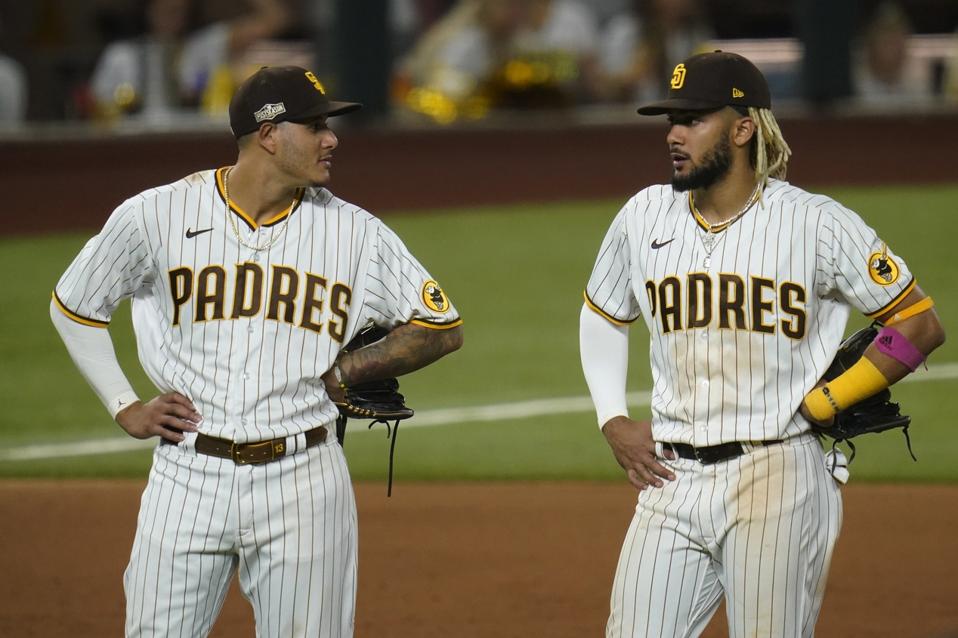 Here’s what a $640 million left side of an infield looks like with San Diego Padres third baseman … [+] Manny Machado, left, and shortstop Fernando Tatis, Jr. Expectations are high with the Padres coming off their first playoff appearance since 2006. (AP Photo/Sue Ogrocki)

It took the San Diego Padres all of one spring training game to get their fans in a tizzy.

Once the locals realized Sunday’s contest with the Seattle Mariners wasn’t on Fox Sports San Diego, they balked. When learning only 10 exhibitions from Arizona will be telecast, they squawked on social media.

Yep, San Diego is giddy about its Padres and even writing that seems strange.

The dysfunctional relationship between the Padres and their patrons has been fascinating. San Diego is a baseball hotbed where the game is played year round, but year after year, the Padres produced one clunker after another.

With their customers aching for team worth rooting for, they often were presented with just the opposite. Petco Park is majestic and the neighboring Gaslamp Quarter is a gastronomical gem, but between the lines the Padres showed the punch of a weak margarita. 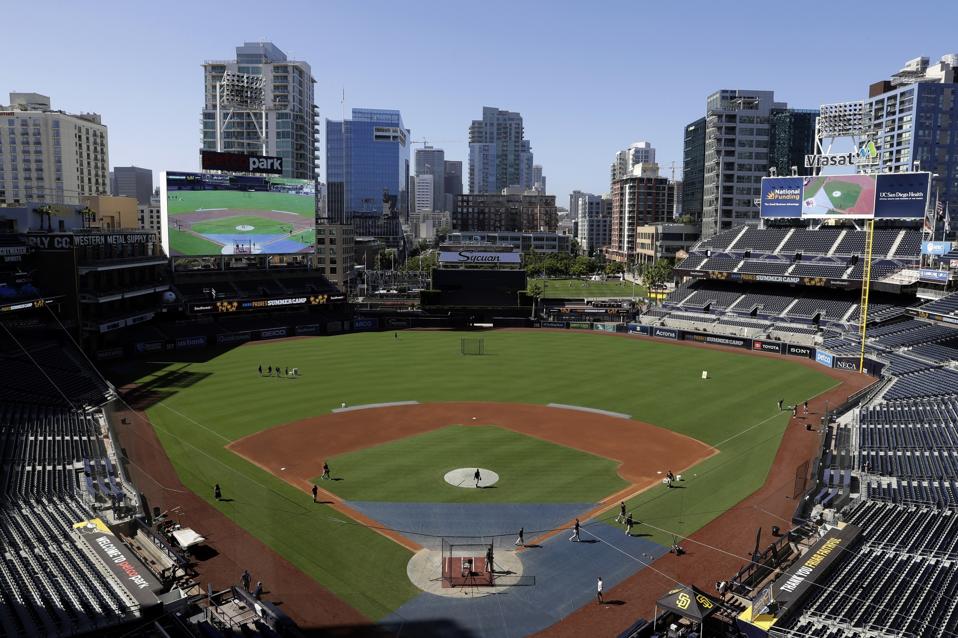 The Padres are excited to welcome fans to their games this season, starting with a 20 percent … [+] capacity on opening day with hopes of expanding attendance from there. (AP Photo/Gregory Bull)

When entering last year’s 60-game season, the pop-gun Padres were trying to avoid a franchise mark of 10 consecutive losing seasons.

That script flipped with their first postseason appearance since 2006. Led by veteran slugger Manny Machado and emerging shortstop Fernando Tatis, Jr. the Padres under rookie manager Jayce Tingler jump-started their love affair with the region.

With a ban on attending games last year because of the pandemic, boosters paid $175 a car to watch the playoffs in a drive-in setting outside Petco Park. When the Padres advanced by beating the St. Louis Cardinals, the intensity revved.

Then the Padres were eliminated by the Los Angeles Dodgers in the next round, but it didn’t douse the good vibes that accompanied the resurgence.

Fueled by the team’s success and it switching to its popular throwback brown-and-gold colors, Padres paraphernalia became prevalent throughout San Diego County.

The Padres also benefit from being the lone team in San Diego hailing from the big four of professional sports. Since the Chargers left after the 2016 season, the Padres became the only game in town.

At the downtown Padres Team Store, it sustained various runs whenever a big signing was announced this offseason. And there were many with the acquisitions of pitchers Blake Snell, Yu Darvish and Joe Musgrove, a San Diego County native.

Then the charismatic Tatis signed an eye-opening 14-year, $340 million contract, making him the third-highest paid player in the majors. This despite an abbreviated career that has seen him play in less than a full season of games.

Unfortunately the Padres’ ability to cash in on their recent success has been muted. They were unable to sell tickets last season and home games likely will be limited to a 20 percent capacity to start this season.

So more fans are turning to and tuning in to FOX Sports San Diego. Viewing records were set last year and interest in the team has exploded since.

The Padres signed a 20-year deal with FSSD in 2012 worth an estimated $1.2 billion. While San Diego is the eighth-largest city in the U.S., it’s the 29th-ranked media market which is reflected in that price.

By comparison the Dodgers, just one year later but in the nation’s second-biggest market, agreed to a 25-year, $8 billion contract with what was then Time Warner Cable.

The difference illustrates the financial importance of the Padres welcoming larger crowds sooner rather than later. They’re eager to monetize the promise of a winning run of baseball after nearly a lost decade.

“We feel the one thing we’re missing in this entire deal is the fans to be part of this,’’ Tingler said. “If we get that opportunity, not only the buzz, the excitement, the energy, I think it’s got a chance to make us complete.’’

What would make San Diego fans whole before opening day?

More televised Padres spring baseball games to ride with their sunny disposition. In this case, having just 10 is far from perfect.