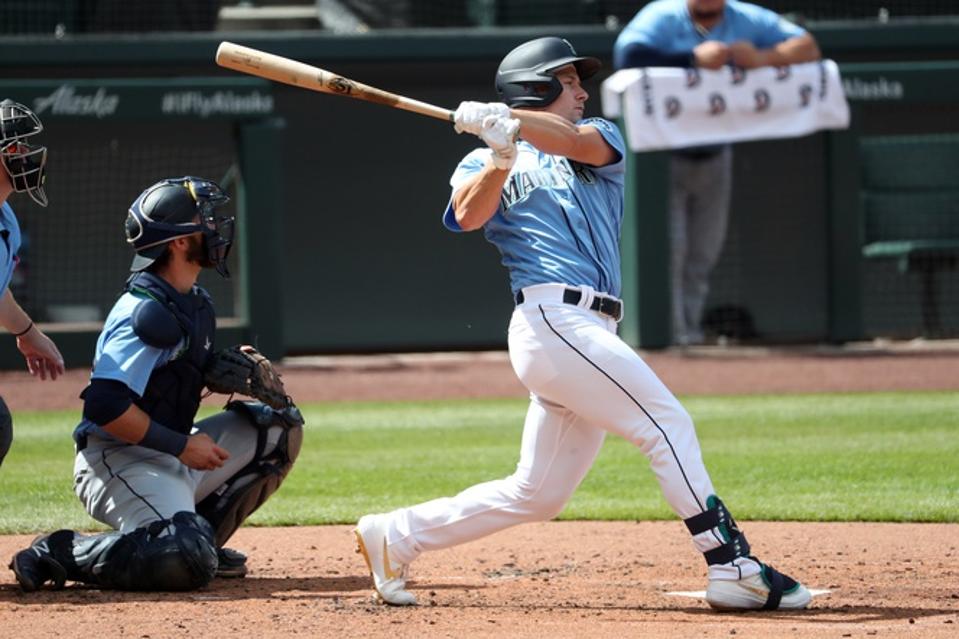 SEATTLE, WASHINGTON – JULY 12: Jarred Kelenic of the Seattle Mariners swings at a pitch in an … [+] intrasquad game during summer workouts at T-Mobile Park on July 12, 2020. (Photo by Abbie Parr/Getty Images)

In a recent spring training press conference, right-handed pitcher Gerrit Cole of the New York Yankees eloquently shared his views on service time manipulation. Cole was clearly agitated by the disparaging comments made by Kevin Mather, former President and Chief Executive Officer of the Seattle Mariners. An alternate pension committee representative and executive subcommittee member of the Major League Baseball Players Association (MLBPA), Cole was imploring his fellow ball players to wake up because Mather’s boorish behavior is not an isolated incident but a common occurrence within Major League Baseball.

The current collective bargaining agreement between the 30 major league ball clubs and MLBPA is set to expire on December 1, 2021. As with every negotiation, there are high levels of stress and anxiety. The current tone between the two parties is defined by animus and distrust instead of philosophical differences. Major League Baseball has not seen a work stoppage since the 1994-1995 strike in which 938 ball games were lost over 232 days. The strike led to the cancellation of the World Series for the first time since 1904.

Service time manipulation has challenged the concept of operating in good faith regarding the collective bargaining agreement. It is a loophole that has been exposed and used by multiple major league ball clubs in an advantageous manner. It is a means of acquiring nearly a season’s worth of productivity from a ball player without allowing them to accrue an entire year of service time. The process calls into question whether a ball club is operating in the spirit of fair competition when it comes to compensation, winning, and putting the best quality product on the field.

Kris Bryant of the Chicago Cubs might have become the face of service time manipulation in recent years, but there are many others who share a similar story. After an impressive 2015 spring training in which the third baseman/outfielder Bryant was the talk of the Cactus League for his prolific home runs, he began the season playing for the Cubs’ AAA affiliate in Iowa to work on his defense. After seven games in which Bryant had hit three home runs over 28 at bats according to Baseball-Reference.com, he made his major league debut for the Cubs on April 17th and played in a total of 151 ball games. Bryant was a National League All-Star who also won the Rookie of the Year Award at season’s end. 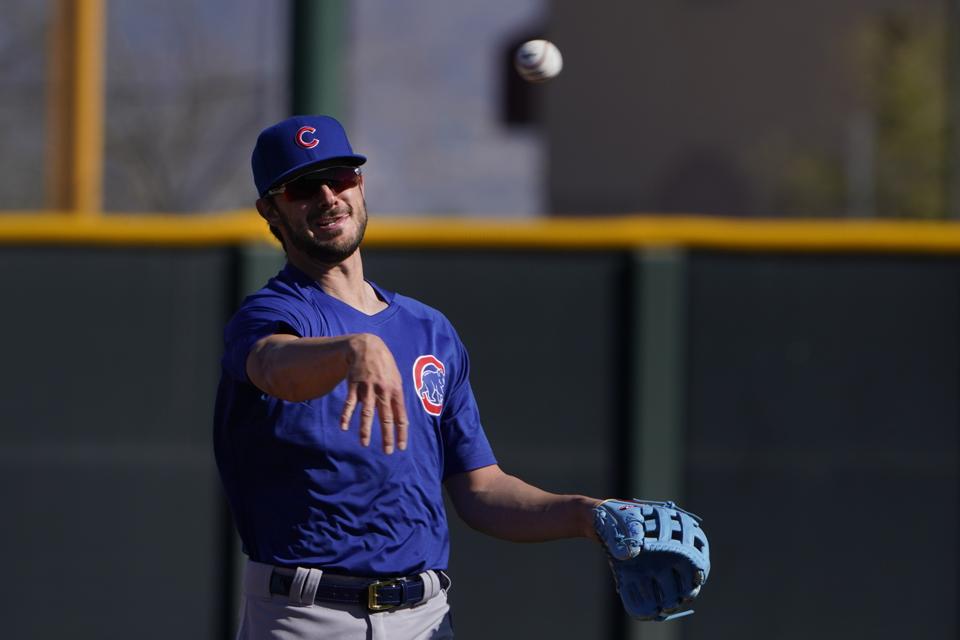 Service time is accumulated every day a ball player spends on a team’s 26-man roster. Under normal circumstances, a 162-game season lasts anywhere between 182-187 days. If a ball player is on an active roster for at least 172 days, they have earned a full year of service. You can earn a full year of service in one season or over multiple seasons. In the abbreviated 60-game schedule last season, service time was prorated using an equation.

In Bryant’s case, he had earned 171 days of service time in 2015 and fell short of a full year by one day. His journey towards free agency had been delayed by a year while he helped the Cubs qualify for the postseason. A grievance was filed in December 2015, but it took until January 2020 for an arbitrator to rule in favor of the Cubs. Over the past two seasons, Bryant’s name has been frequently mentioned in trade rumors. His one-year, $19.5 million contract expires at season’s end as he finally becomes eligible for free agency.

It is a major financial accomplishment for a ball player to earn a spot on the 26-man roster because of the minimum major league salary after years of struggling at the minor league level. The major league minimum salary for the 2021 season is $570,500. Once ball players achieve this impressive goal, they immediately think of three phases of compensation: pre-arbitration, arbitration eligibility, and free agency.

Jarred Kelenic, an outfielder in the Seattle Mariners’ farm system, is currently the fourth best overall prospect in Major League Baseball according to MLB Pipeline’s Top 100 Prospects 2021 Rankings. His name was referenced by Mather on multiple occasions in the now infamous Bellevue Breakfast Rotary Club Zoom meeting which led to his resignation. Mather mentioned how Kelenic turned down a six-year contract offer from the Mariners after consulting with the MLBPA. Kelenic has publicly expressed his frustrations and believes the Mariners are manipulating his service time. 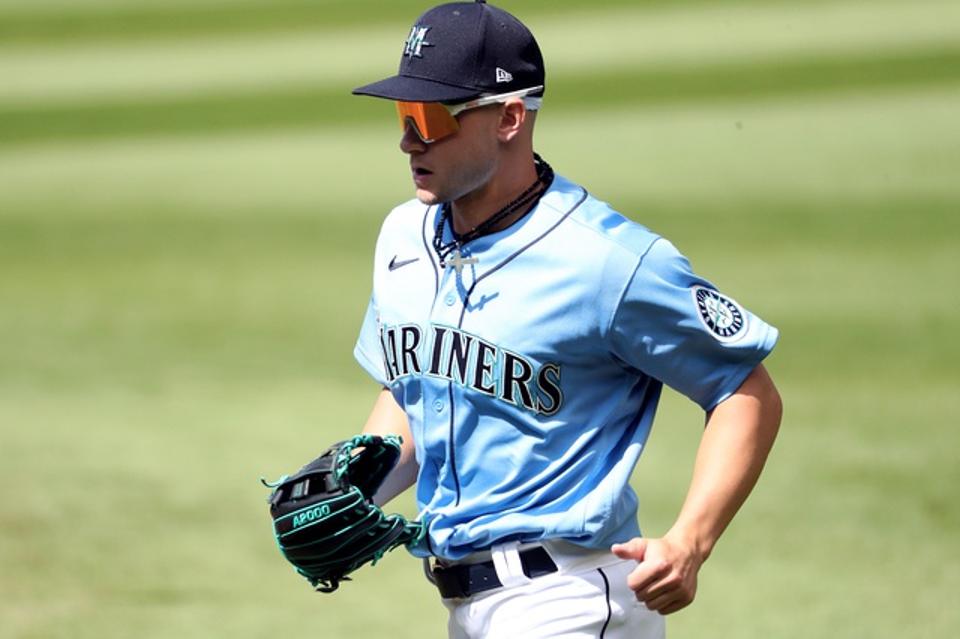 SEATTLE, WASHINGTON – JULY 12: Jarred Kelenic of the Seattle Mariners jogs back to the dugout during … [+] summer workouts at T-Mobile Park on July 12, 2020. (Photo by Abbie Parr/Getty Images)

Even before seeing how the 21-year-old Kelenic would perform during spring training, Mather stated that he would need a few more at bats at the minor league level for a month. He also said Kelenic would be playing left field for the Mariners in April at T-Mobile Park. As Mather seemed to be contradicting himself, a common excuse for service time manipulation always involves additional at bats or working on defensive skills.

If the Mariners decide to start Kelenic in the minor leagues with the AAA Tacoma Rainiers this season, the earliest they could add him to the 26-man roster without allowing him to accrue a full year of service time would be Friday, April 16th in a home ball game against the Houston Astros. This is based on a 2021 season covering 186 days. The Mariners would have already played 13 ball games over 15 days. The Rainiers would have played seven ball games in eight days.

Service time manipulation is a contentious topic for members of the Major League Baseball Players Association. It raises serious questions regarding financial motives and the competitive spirit of major league ball clubs. Most importantly, service time manipulation fails to consider the fragility of a ball player’s career regarding injuries or acting in the best interests of the fans. You are left with the impression that ball clubs are looking to get the most for the least while treating ball players as points of data derived from an algorithm. Thanks to Kevin Mather’s stupidity, Jarred Kelenic has now become one of the most intriguing ball players in spring training while placing the Seattle Mariners in a highly uncomfortable position.