Iran has unveiled its new Kaman-22 drone, which seems to be modeled on the U.S.-made MQ-1 Predator, with other features from the more advanced MQ-9 Reaper. The development comes over four years after Iran showed an example of what was apparently a captured U.S. military Predator, which Tehran erroneously described as a U.S. Army MQ-1C Gray Eagle.

According to official Iranian sources quoted by the semi-official Tasnim news outlet, the unmanned aerial vehicle (UAV) has an endurance of more than 24 hours and a range of 1,860 miles, although it is impossible to verify any of this. The same source said the Kaman-22 was now “in the final stages of production.” In contrast to these performance figures, the U.S. Air Force attributes a range of 770 miles to the Predator and 1,150 miles to the larger and more capable Reaper. 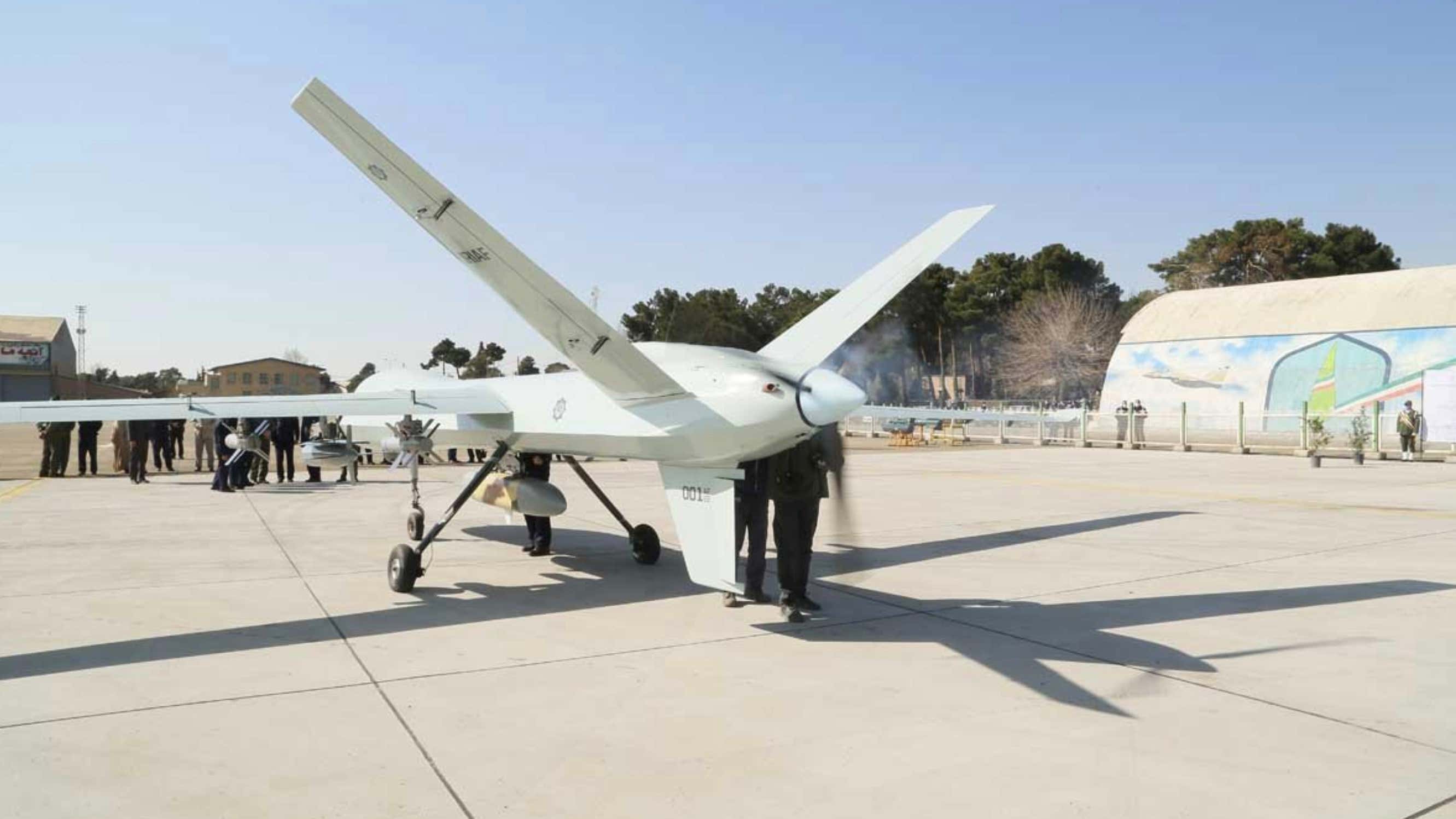 “The Kaman-22 drone is capable of carrying all types of payloads with very long flight duration [and] has the ability to identify, monitor, and collect information and photograph distant targets,” Tasnim quoted Brigadier General Aziz Nasirzadeh, commander of the Islamic Republic of Iran Air Force (IRIAF), as saying.

The first available images of the indigenous drone reveal a pusher propeller powerplant, although it’s not immediately clear what type of engine is used. The Predator uses a four-cylinder piston engine while the Reaper employs a turboprop. While we have no idea what engine powers the Kaman-22, Iran has made Predator-sized drones in the past, with the Shahed-129, for example, reportedly using an imported Rotax 914 engine, as used in the MQ-1.

Like the MQ-1 and MQ-9, the Kaman-22’s straight wing features weapons hardpoints, and upturned tips or quasi-winglets, while the upward V-tail, combined with a ventral fin, seems to be derived from that of the Reaper. The landing gear appear to be of the fixed type, in contrast to the retractable undercarriage on the Predator and Reaper. The aircraft also bears a strong resemblance to the Chinese CH-5 drone, another Reaper lookalike that has been widely exported.

In terms of size, and based on the limited images available so far, the Kaman-22 appears to be more closely matched to the smaller Predator, which has a length of 27 feet, a 55-foot wingspan, and an empty weight of 1,130 pounds. 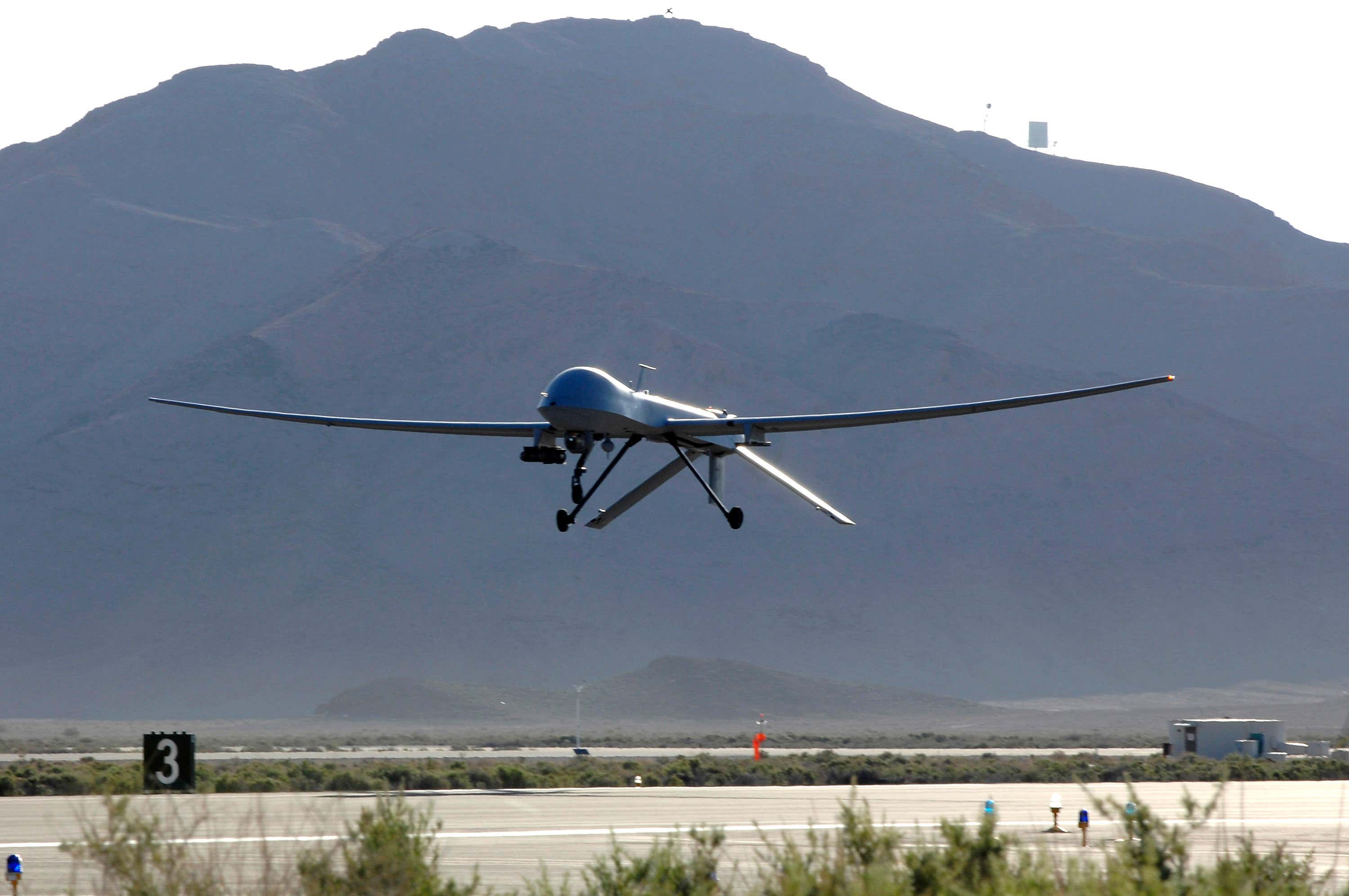 The weapons mounted below the wings of the Kaman-22 have been provisionally identified as four Sadid guided bombs and two Balaban glide bombs, Meanwhile, there is an apparent electro-optical sensor turret under the nose and an unidentified store — likely a data link pod — mounted on the centerline stores pylon below the fuselage. While the forward fuselage hump includes a satellite communications antenna on the MQ-1 and MQ-9, the Kaman-22 is probably restricted to line-of-sight operations via the underslung data link pod.

Other images from the unveiling show an AN/ALQ-101 or -119 electronic warfare pod, or a clone, a laser-guided bomb (LGB), and an apparent targeting pod, displayed alongside the drone. The electronic warfare pod is of the type supplied to Iran by the United States prior to the 1979 revolution, while the LGB has a strong resemblance to the American Paveway family. While it is not clear if these are actually part of a realistic, or feasible, operational payload for the drone, they make an interesting juxtaposition with the indigenous weapons that are shown mounted on the aircraft. The Kaman-22 with an array of weapons and stores.

There are indications that the first example of the Kaman-22, at least, is not fully ready for service. While there is no evidence, or claim, that the Kaman-22 has actually flown, at least one photo appears to show it taxying, with the engine running.

Although of poor resolution, the first photos of the Kaman-22 reveal several potential shortcomings in the build quality of the drone. These include what appears to be a loose-fitting attachment for the centerline stores pylon, a rusty nose gear leg, and adhesive tape anchoring cables around the main undercarriage legs. That could all point to this particular being a first prototype, a non-flying test vehicle, or even a sophisticated, taxi-capable mock-up.

The existence of the new drone was acknowledged earlier this month by Brigadier General Aziz Nasirzadeh, commander of the Islamic Republic of Iran Air Force (IRIAF). He was reported as saying that the Kaman-22 (meaning Arrow-22 in Persian) would be revealed by early March and that it would be able to carry a payload of 660 pounds — the MQ-1B has a payload of 450 pounds. Iran’s semi-official Mehr news agency, meanwhile, described the forthcoming UAV as “a giant drone.”

At that time, however, it was described as an upgrade of the previous Kaman-12 that entered service last September. However, as can be seen in the image below, the Kaman-22 is a very different drone from its namesake and is clearly inspired by the Predator and Reaper.

It wouldn’t be the first time that Iran has reworked, or at least been heavily inspired by U.S. drone designs. Most notably, Iran’s flying wing-type unmanned aircraft are supposedly derived, at least in shape, from a captured U.S. RQ-170 stealth drone.

While Iran claims the RQ-170 was allegedly brought down in 2011 by an Iranian electronic warfare unit, which commandeered the aircraft and landed it relatively intact, this has never been substantiated in any way. The origin of the Predator displayed by Iran in 2016 is unclear.

Speaking earlier this month, Brigadier General Nasirzadeh stated that IRIAF crews were being trained to operate the Kaman-22 at the Shahid Sattari Aeronautical University in Tehran. He also mentioned “exchange programs” between Iranian students and unnamed Chinese and Pakistani institutions. However, it was not immediately clear if these programs specifically related to UAV programs. Although it remains to be seen just how practical the Kaman-22 is, or even if it’s a finished product, its appearance is just the latest development in Iran’s rapidly evolving combat drone capabilities.

There is a big question, however, around why the IRIAF might require a drone in this class. Both the Predator and Reaper are decades-old designs now and are therefore not the obvious choice for a design concept. Meanwhile, the Islamic Revolutionary Guard Corps (IRGC) already operates armed Predator-sized Shahed-129s, based on the Israeli Hermes 450 pattern, which is of broadly similar vintage and capability and is now also well proven in Iranian service. It is unclear exactly why the IRIAF is spending time and limited resources to develop this new drone.

While Tehran’s economic sanctions have severely limited its ability to introduce new manned combat aircraft, the country has meanwhile concentrated its resources on unmanned aircraft, as well as missile programs. The unveiling ceremony for the Kaman-22.

In January this year, the combat drones of Iran’s IRGC were showcased during a series of missile and UAV exercises in the center of the country. These included new drones, and drone-launched weapons tested unmanned combat, surveillance, reconnaissance, and electronic warfare capabilities.

Iran’s drones have also been provided to the country’s proxies in the wider region, chiefly Hezbollah and the Houthis. Undoubtedly, Iran has made significant developments on the unmanned front, and Iranian and Iranian-derived drones have been used to notable effect in the Middle East in recent years. The Houthi rebels, in particular, have demonstrated the ability to mount increasingly sophisticated attacks using suicide drones. Most notably, these were used to attack Saudi oil infrastructure in 2019. But the Kaman-22, with its runway-dependent design, is not necessarily the most obvious choice for these kinds of non-state operators. On the other hand, the similar-sized Shahed-129 has been used in Syria, as part of Tehran’s involvement in that country’s long-running civil war. In 2017, U.S. Air Force combat jets shot down two of these drones near the town of At Tanf. It is possible that the Kaman-22 has been developed with this theater in mind.

Iran’s military has also, in the past, made various grandiose claims about its capabilities and many of these have ultimately proven to be unfounded. Nevertheless, Iran has still demonstrated many actual operational unmanned aircraft, including Predator-sized types, so it is possible that the new drone will enjoy a successful development path. Even if the Kaman-22 falls short compared to official announcements about its performance, it could still prove a useful weapon.