BRADENTON, Fla. – Word of Tiger Woods being in a single-car accident Tuesday quickly spread over The Concession Golf Club as players geared up for the World Golf Championships-Workday Championship.

The mood on the sun-splashed day quickly soured.

“I’m sick to my stomach,” an emotional, teary-eyed Justin Thomas said during a video conference with reporters. “You know, it hurts to see one of your, now one of my closest friends, get in an accident. Man, I just hope he’s all right. Just worry for his kids, you know. I’m sure they’re struggling.”

Woods, 45, was transported by ambulance to a hospital with multiple leg injuries and was in surgery Tuesday afternoon, according to his agent, Mark Steinberg. In a statement, the L.A. County Sherriff’s Department said police responded to a “roll-over traffic collision” at approximately 7:12 a.m. local time on Hawthorne Boulevard in Rancho Palos Verdes. Later, the Sherriff’s Department confirmed the injuries were not life threatening.

Woods, recovering from his fifth back surgery, a microdiscectomy procedure Dec. 23 that removed disc fragments causing nerve damage, was in California as the tournament host for the Genesis Invitational at Riviera Country Club in Pacific Palisades. On Sunday, he told CBS’ Jim Nantz that he was going to having an MRI soon that would determine his next steps in the recovery when he got the results.

On Monday, Woods started a two-day content shoot for Golf Digest and GolfTV at Rolling Hills Country Club. Woods gave on-course lessons to a number of celebrities, including David Spade and former NBA star Dwayne Wade. Woods, however, did not show up for Tuesday’s shoot.

Here’s how players at The Concession reacted to the news:

“I’m shocked and saddened to hear about Tiger,” USA Ryder Cup captain Steve Stricker told Golfweek. “I’m hoping and praying that he will be OK.” 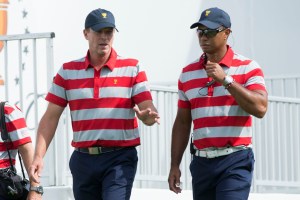 Bryson DeChambeau was playing a practice round at The Concession when he saw the news on Instagram. He quickly made calls to members of Woods’ team.

“A bit shocked, obviously,” DeChambeau said. “You don’t expect anything like that to happen. But from everything that I know about Tiger, I’m sure he’ll recover and he’ll do everything in his power to come back, I’m sure he will.

“He’s an amazing human being that has done incredible things. I have no doubt in my mind he’ll be back. Take him a little longer, I’m sure, but from my perspective he’s one of the most impressive human beings I’ve ever met and I think that he’ll come back just fine.”

“He’s our hero out here,” Scott said. “You think guys like Tiger and Kobe Bryant are untouchable, but they’re not. I just hope he’s all right.” 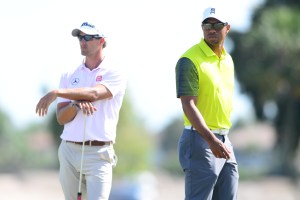 Adam Scott and Tiger Woods on the 2nd green in the second round of the WGC – Cadillac Championship at TPC Blue Monster at Trump National Doral. (Photo: Andrew Weber-USA TODAY Sports)

Billy Horschel heard about the crash from Bubba Watson on the third green.

“Very tough right now,” Horschel said. “We sent texts to (Steinberg) saying we’re praying for him. It’s tough. He’s a friend of mine. We don’t know the full gist of things but we’ve heard the injuries are not life threatening. We pray he’ll be fine.”

Jon Rahm was playing with Tony Finau when they heard of the crash.

“As if his body hasn’t endured enough,” Rahm said. “Just hoping out of a bad situation, the best possible outcome, and I hope he can recover from it and we can see him on the golf course as early as possible. I know he underwent surgery early this year, so I hope he didn’t damage anything he had done already.

“I just hope he can get out of the hospital after recovery and he can still play with his kids and have a normal life.” 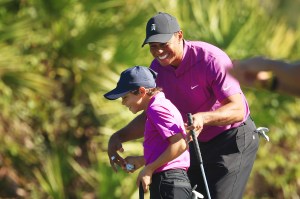 Tiger Woods and Charlie Woods react on the third green during the first round of the PNC Championship at the Ritz-Carlton Golf Club Orlando on December 19, 2020 in Orlando, Florida. (Photo by Mike Ehrmann/Getty Images)

“He means a lot to the game of golf,” Finau said. “I’ve said it I think time after time, the ’97 Masters changed the course of my life. Without that event I probably wouldn’t be here, I wouldn’t be playing golf, so he definitely changed the course of my life, my career. I think I’m one of hundreds of guys out here probably that would say the same thing.

“We all know he’s a strong cookie physically, mentally, so if someone’s going to get through this, he will and be back for the better, I’m sure. My thoughts and prayers I’m sure, as all the players, I can speak on their behalf, are with Tiger.”