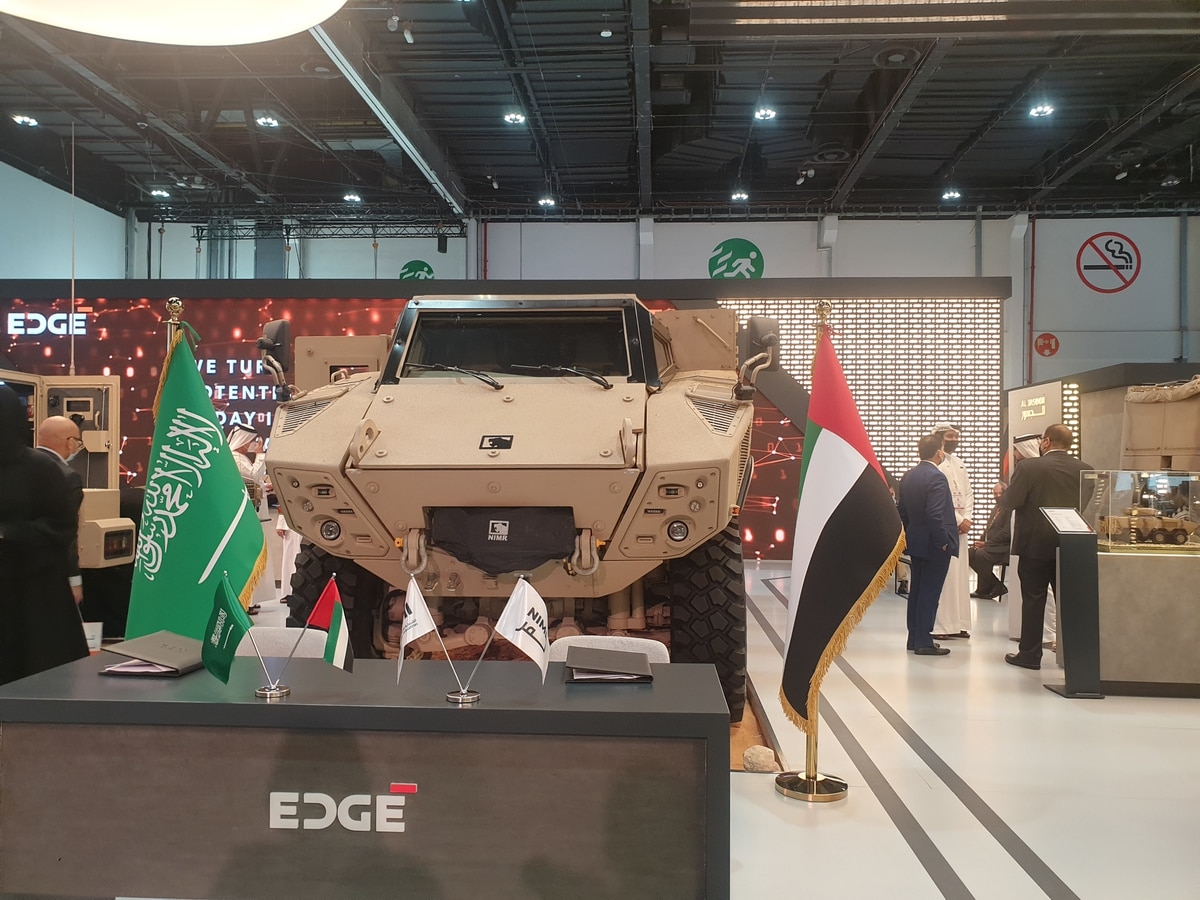 The four-wheel drive JAIS vehicle is on display at IDEX 2021. (Agnes Helou/Staff)

Negotiations between Edge Group subsidiary NIMR and Saudi Arabian Military Industries were ongoing for some time over the terms of a potential partnership — the teaming agreement that encapsulates the latest deal. The production plan was finalized during the International Defence Exhibition and Conference, taking place in Abu Dhabi, UAE, from Feb. 21-25.

Designed to lay the foundation for a long-term joint venture between the two entities, the agreement mandates NIMR license technology to Saudi Arabia so the kingdom’s industry can manufacture the JAIS vehicle and further develop its supply chain.

The JAIS was selected for production in Saudi Arabia after facing off against other vehicles in a competition run by SAMI and Saudi military experts.

Abri Du Plessis, the CEO of NIMR, told Defense News it is too early to estimate the deal’s value as well as the number of vehicles to be produced. “We can’t put a number on it, but we are very excited about the potential of what we can achieve together.”

The executive added that he wants to see this deal to lead to a joint venture between NIMR and SAMI, where the former transfers technology to the latter, who then locally manufactures the JAIS to further the kingdom’s economic initiative known as Vision 2030. “We believe this is the beginning of a long-lasting and prosperous partnership.”

The CEO and managing director of Edge, Faisal Al Bannai, said the agreement “represents the first military collaboration between Saudi Arabia and the UAE and is a major step in boosting the already robust relations between our respective nations.”

Added Walid Abukhaled, the CEO of SAMI: “We are pleased to witness the culmination of our shared efforts over the past year as we ink this agreement to transfer technology and knowledge to Saudi Arabia’s defense manufacturing sector, contributing to the Saudi Vision 2030 objective of localizing over 50 percent of the military equipment spending by 2030. SAMI has selected NIMR as its preferred local partner due to its strategic position as a key enabler of the Saudi Vision 2030. This achievement also supports PIF’s [Public Investment Fund’s] efforts through SAMI in localizing cutting-edge technology and knowledge, as well as building strategic economic partnerships.”

Money Minute: When is the best time to ask for a credit limit increase