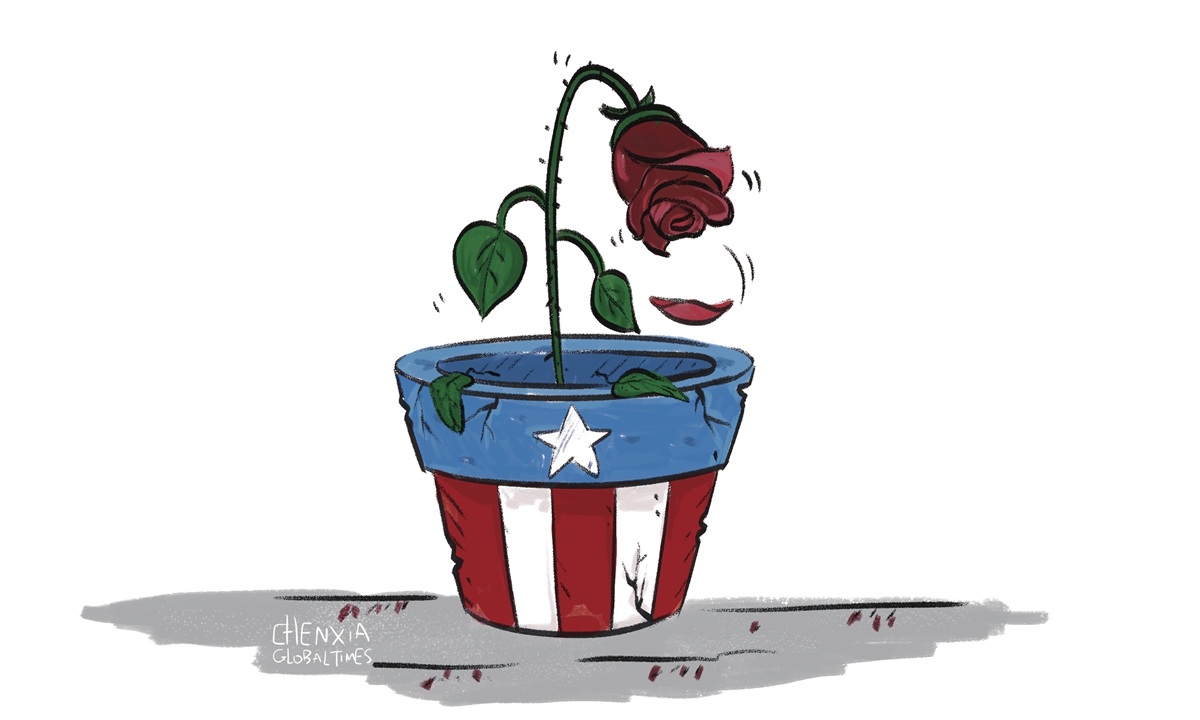 On March 19, 2003, US forces began invading Iraq. At that time, I was having dinner with a friend at Times Square in New York City. At around eight o’clock in the evening, the busiest time in Manhattan, TV screens in bars were also showing busy scenes including scenario planning on sand tables, maps, animations, experts and journalists on the frontline.

After the first 35 minutes of the 9-year war, then US president George W. Bush delivered a speech, claiming, “We will pass through this time of peril and carry on the work of peace. We will defend our freedom. We will bring freedom to others and we will prevail.”

After the disintegration of the Soviet Union, Americans had been feeling refreshed and arrogant – US civilization finally secured victory globally. But after the September 11 attacks in 2001, quite a few Americans’ optimism about their future in the world plummeted. I still remember when I participated in a discussion, an American woman cried as she asked, “Why do they hate the US that much?”

Around the time of the Iraq War, Left Behind, a series of religious novels, became bestsellers in the US. Since the first book, Left Behind: A Novel of the Earth’s Last Days, debuted in 1995, a total of 16 works of the series have been published. As early as 2016, close to 80 million copies of the books had been sold, according to National Public Radio.

The book prophesied the end of the world, depicting the battle between good and evil, Christ and Satan – the battle of the Antichrist. The popularity of the books mirrored religious sentiments at the bottom of American civilization.

Americans have always had a sense of superiority in terms of civilization. They feel they are God’s messenger to the world and can lead others with light. However, their concerns about the decline of US civilization were not alleviated by the so-called US victory in the Iraq War and the death of Osama Bin Laden.

This kind of fear regarding US civilization intensified after the 2008 financial crisis, and expanded from concerns toward external world, such as the rise of China, to the US’ internal problems.

According to polls and reports, moral values, family values and religion, instead of economy, had played crucial roles when Americans decided whom to vote for in the 2004 presidential election.

In the just-concluded 2020 US election, both Democratic and Republican camps described themselves as the last defenders of American and Western civilizations.

Former president Donald Trump warned that “the future of our country and indeed our civilization is at stake,” during a speech in Arlington, Virginia in August 2020. As early as in December 2019, House Speaker Nancy Pelosi issued the same warning that “civilization as we know it today is at stake.”

Americans’ fear of their civilization’s decline stems from Christianity’s apocalyptic complex. During the election campaigns, Trump and his team’s hype over the “threat” posed by the emergence of China and the Communist Party of China is aimed at consolidating their voter base by utilizing American’s concern and panic over the decline of their own civilization.

But what needs more attention is that when the US and an increasing number of Western societies discuss the future of the US and Western civilizations, they focus more and more on their domestic issues.

Niall Ferguson, a Scottish-American historian, argued that Western civilization appeared to have lost confidence in itself and this is mainly because “major universities have ceased to offer the classic ‘Western Civilization’ history course to their undergraduates.” He continued, “In schools, too, the grand narrative of Western ascent has fallen out of fashion.”

There are more worries about the increase in immigration, which has changed the demographic structure of the US. This in turn has caused a drop in the numbers of people who believe in Western culture and beliefs.

Safa Motesharrei, a systems scientist at the University of Maryland, used a computer model to gain a deeper understanding of the mechanisms that could lead to the collapse of civilizations. According to a research published by Motesharrei and his colleagues in 2014, ecological strain and economic stratification – the growing gap between the rich and the poor – can lead to a societal collapse. These two factors are both relevant to US domestic affairs.

The intellectual, liberal elite of the US have also been attacked for their criticism of US politics and culture. In an article entitled “Why We Must Teach Western Civilization,” published on National Review in April 2020, the author Andrew Roberts worried that “Western civilization, so important to earlier generations, is being ridiculed, abused, and marginalized, often without any coherent response.”

Western civilization has swept the globe for more than 500 years now. But the conflict between civilizations during the 2020 US election has revealed some problems that are emerging in the West. We have reached an important juncture of globalization. How the US is to deal with these problems will influence globalization for some time in the future. However, the world will probably not stop and wait.

The author is a senior editor with the People’s Daily, and currently a senior fellow with the Chongyang Institute for Financial Studies at Renmin University of China. [email protected] Follow him on Twitter @dinggangchina