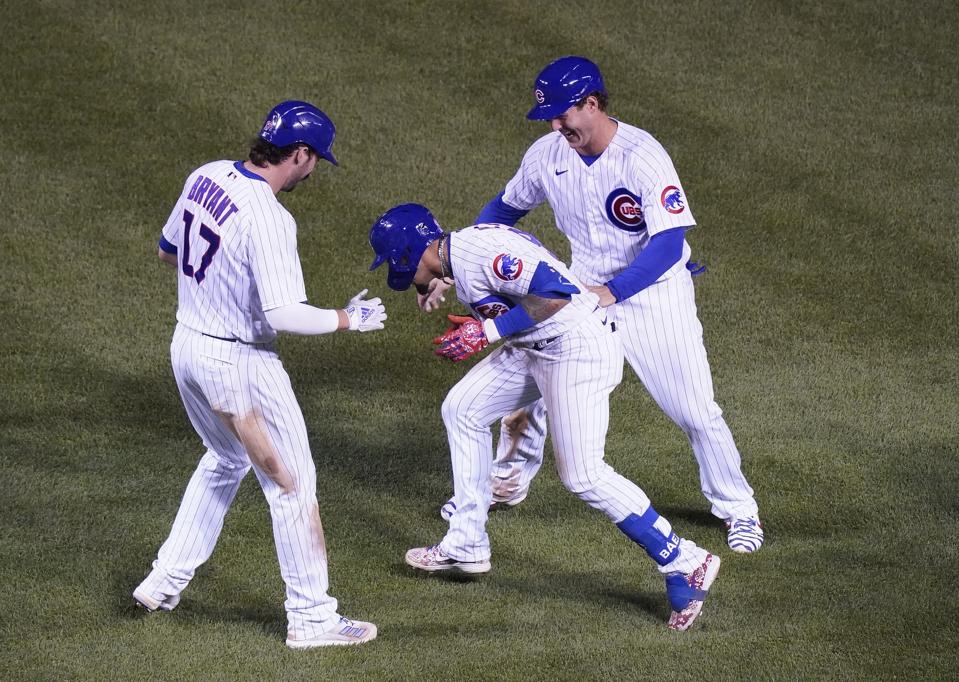 CHICAGO, ILLINOIS – SEPTEMBER 16: Javier Baez #9 of the Chicago Cubs celebrates with Anthony Rizzo … [+] #44 and Kris Bryant #17 following his RBI during the tenth inning of a game against the Cleveland Indians at Wrigley Field on September 16, 2020 in Chicago, Illinois. (Photo by Nuccio DiNuzzo/Getty Images)

Are the obits premature for the Chicago Cubs?

That’s a distinct possibility given that the same core of players heading to camp in Mesa, Ariz., has been a playoff team in five of the last six seasons. It’s lost amid the emotional angst that the Cubs played .545 baseball last season, which projects to 92 wins over 162 games, and among significant contributors lost only Yu Darvish to a series of perplexing cost-cutting moves.

Factor in all the bounce-back candidates on manager David Ross’ roster and you have a team capable of being one of MLB’s best surprises. And if it goes bad, well, you can see why Theo Epstein decided to walk away from the last year of his contract.

The one thing the Cubs don’t figure to be this season is what they have been since losing the 2017 NLCS to Darvish and the Dodgers — boring. They’ll make news one way or the other as they try to wring a worthy encore to one of the most historic eras in franchise history.

Here are five questions about the Cubs as they open spring training?

The Cubs’ cornerstone infielders are all in the last seasons of their contracts, with no extension in sight. It’s possible that long-term extensions will be announced for one or more of the players before Opening Day but given the impact of Covid-19 on baseball finances it seems more likely they’ll either be traded in mid-season or reach free agency next fall.

How could this have happened? It’s impossible to explain given the $184-million deal Jason Heyward was handed before the 2016 season, with Wrigley Field renovation still ongoing and a team-owned television network on the drawing board, but Epstein and his successor, Jed Hoyer, allowed Baez and Bryant to get this far on one-year contracts and never updated the team-friendly deal Rizzo signed eight years ago.

You can’t blame the players if they want to see how other teams value them. The inability of the Epstein/Hoyer regime to maintain a productive farm system must leave them wondering how competitive the team will be in upcoming years.

Best guess: Sure but don’t pencil them onto future All-Star teams just yet.

Baez remains one of the top fielders in the game — a big value given he plays shortstop — but his .203/.238/.360 slash line had to do with bigger issues than not being able to watch fresh video of his at-bats. He’s lost plate discipline as he’s aged, chasing more breaking pitches out of the strike zone every season while swinging out of his shoes.

It clearly hasn’t helped that the Cubs have had a carousel of hitting coaches since inexplicably canning John Mallee after 2017. But Baez’s career on-base percentage of .304 (which drops to .258 in his 34 postseason games) speaks to his selfish approach. In fairness, though, as recently as 2019 he put up an .847 OPS, so maybe 2019 was a true outlier.

Playing for long-term contracts, both Bryant and Baez could be in line for monster seasons that carry the Cubs to unexpected success. But the rest of the NL will have to see it to believe it.

Rizzo understood he was opting for security over market value when he signed a seven-year contract with two options before ever playing a full season in the big leagues. He’ll be the Cubs’ third-highest player with a salary of $16.5 million this season but has ranked as low as eighth or ninth in recent years, without ever openly pushing for a contract that addressed his role as the team’s most reliable player and unquestioned leader.

He’s entering his age-31 season and, like Baez and Bryant, suffered through a downturn in production during 2020. It was alarming to see if him no longer do damage against fastballs — a trend that suggests reduced batting speed, especially when it happens to veteran players. So he’s got some proving to do too.

Given that a rebuilding mode appears likely, if not yet completely inevitable, Rizzo remains an ideal long-term fit. He was the perfect welcoming party for Baez, Bryant, Kyle Schwarber and others and could serve that same role for the next generation. But Rizzo wouldn’t be human if he didn’t wonder if there could be greener grass with his hometown Miami Marlins or at least one of the teams that trains in South Florida, like the Washington Nationals or Houston Astros.

Best guess: They’ll give it their best but have a lot of days when they look like spent fighters.

Arrieta, who returns to the Cubs with a one-year contract for his age-35 season, is a major key for a starting rotation that gets thin in a hurry behind Kyle Hendricks and fellow changeup artist Zach Davies, who was acquired from San Diego in the Darvish trade.

He was similarly a middle-of-the-rotation arm before he forced his way to the front in 2015 and ’16, taking the Cubs with him, so it’s possible he can find a little velocity and command on his hard sinker to set up his other pitches. But otherwise you wonder whether the Cubs will get innings from an inventory of starters that includes Alec Mills, Trevor Williams, Kohl Stewart, Tyson Miller and Adbert Alzolay and Brailyn Marquez.

Kimbrel, largely a bust since being signed in mid-season two years ago, enters his age-33 season surrounded by an unsung bullpen cast. He needs add a few more strong seasons to strengthen his case for the Hall of Fame and shouldn’t be counted out. But it’s fair to wonder if leads will even get to him with no established set-up men in front of him.

Best guess: He’ll do exactly that, rewarding Hoyer for signing him to a deal for one year and an option at only $7 million.

Pederson delivered only a .230 batting average in 748 games over seven seasons with the Dodgers, struggling to escape platoon player status. But he’s always been a tough out (.336 career OBP) who can pile up home runs in bunches. He’s easier on the eyes than Schwarber in left field but not a major upgrade.

He’ll benefit both from modest expectations and the Cubs’ lack of outfield depth, with no young right-handed hitters pushing for playing time. The question is whether he can help make the Cubs competitive enough to avoid joining Baez, Bryant and even Rizzo in mid-season trades that mark a roster purge and return to the early Epstein years.