President Donald Trump Probably Donated His Entire $1.6M Salary Back To The U.S. Government – Here Are The Details

What AT&T, Verizon and T-Mobile are buying up: The 5G battle between US carriers just got very interesting

LeBron James sharply responds to criticism that he’s too political

The stakes are high, as U.S. and coalition troops in Iraq continue to fend off frequent attacks from Iranian-backed Shia militia groups. On Monday, militias launched a volley of 14 107mm rockets at an Iraqi air base in Irbil where U.S. forces are based. Three rockets struck the base, killing one non-U.S. contractor and injuring nine more people, including five Americans.

The tension is emerging as the Pentagon, at Biden’s direction, undertakes a review of whether changes need to be made to U.S. military deployments worldwide, with an eye toward countering the growing threat from China. The review, while still in its initial stages, is likely to set off a new struggle for limited resources among the regional military leaders.

“This was all meant to signal that there is a new sheriff here in town in Washington, and we’re going to review everything [Trump] did — no more carte blanc,” said Bilal Saab, a former Trump defense official now at the Middle East Institute. “At the same time … this is one relationship that you obviously don’t want to lose. It is too valuable to mess up.”

Since frictions with Iran erupted in the spring of 2019 when Iran crippled two oil tankers in the Gulf of Oman, military leaders in the Pentagon and U.S. Central Command have urged the White House to beef up U.S. military presence in the Middle East, at times clashing with their civilian counterparts who wanted to shift resources to Asia, according to conversations with five former and current officials, who spoke on condition of anonymity to discuss sensitive operational planning. Military officials sounded the alarm over the vulnerability of Saudi Arabia, particularly after a September 2019 attack on the state-owned Saudi Aramco oil processing facilities at Abqaiq, which temporarily shut down half of Saudi oil production.

For the most part, the push has succeeded. In the past two years, the Pentagon has deployed thousands of additional troops, as well as fighter and bomber squadrons, warships and missile defense batteries, to the region. Meanwhile, U.S. Central Command chief Gen. Frank McKenzie has pushed to keep at least one carrier strike group in the Middle East at all times, former and current officials said, and early last year operated a rare two carriers in the region for an extended period.

While troop levels in the region have fluctuated since May 2019, U.S. military presence there has decreased over the past few months, according to Central Command spokesperson Capt. Bill Urban. Between June 1, 2019, and Dec. 1, 2020, Urban estimated that there were roughly 60,000 to 80,000 troops in the region most of the time. But today, U.S. force levels are below 60,000 troops — not significantly higher than they were on May 1, 2019.

Some in the Biden administration question whether the military buildup in the Gulf has deterred Iran. Tehran continues to make progress toward nuclear weapons capability, and Iranian officials publicly refuse to negotiate a new nuclear pact without sanctions relief. Meanwhile, the Houthis and other Iranian proxy forces continue to attack Saudi facilities and other U.S. interests in the region.

The new administration has signaled that it wants to put pressure on Riyadh. Just weeks after taking office, Biden ordered a temporary freeze on the sale of precision-guided weapons to Saudi Arabia pending a review and an end to all U.S. military support for the Saudi-led coalition’s offensive operations in the Yemen civil war. The administration is also reviewing whether to maintain the current force levels in the region as part of the global review. 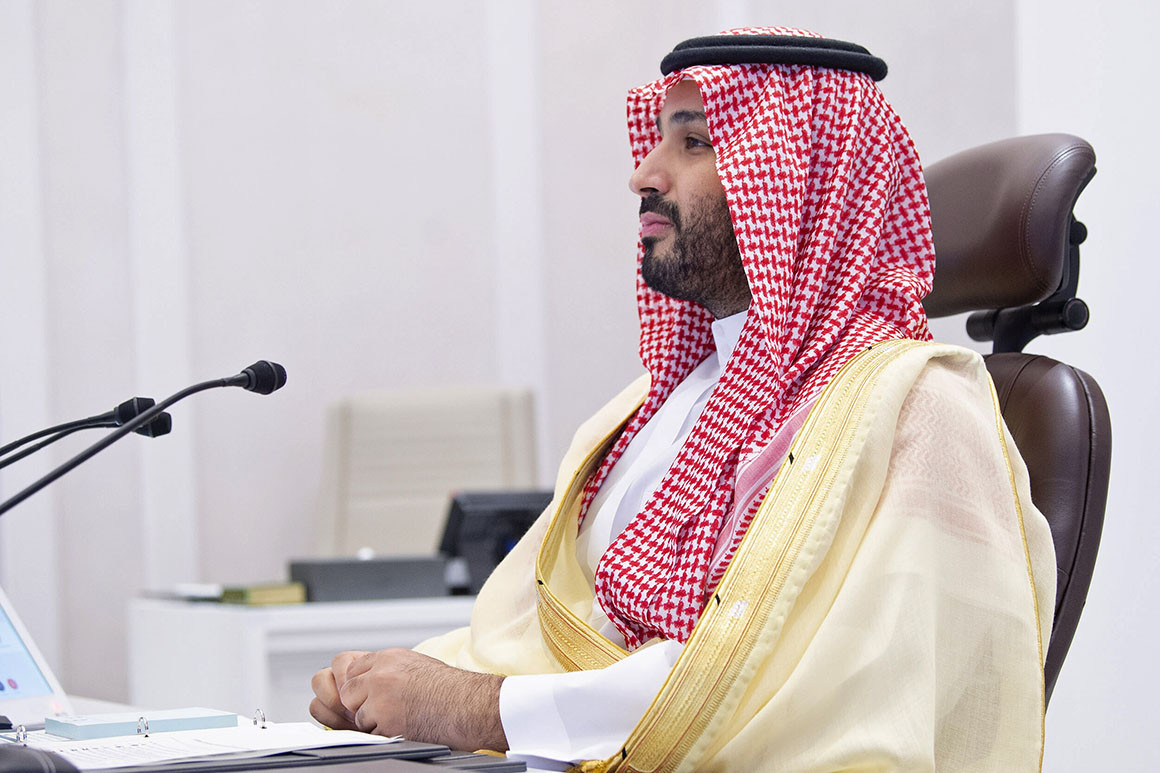 But experts say these steps will change little on the ground in Yemen, where Iranian-backed Houthi rebels have been fighting Saudi-led forces for years. Biden officials have described the weapons sale review as routine, and the Trump administration years ago ended most U.S. military support to the coalition, including aerial refueling and intelligence sharing for offensive operations.

“To a certain extent, the Biden administration got outfoxed on this,” said Dave Des Roches, associate professor at the Near East South Asia Center for Strategic Studies at the National Defense University, noting that the Saudis have emphasized U.S. commitments to their territorial integrity.

“If you have a spectacular attack or missile that makes it to Riyadh, the Biden admin is in a bind. You have to respond. You have to try to take out the launch points.”

A spokesperson for the National Security Council declined to comment.

Meanwhile, the State Department reversed a last-minute decision by the Trump administration to designate the Houthis as a foreign terrorist organization, after humanitarian leaders warned that the terror designation made it difficult for them to do relief work in Yemen.

Still, the move should not be taken as a lack of U.S. commitment to Saudi, rather an effort to ease the humanitarian catastrophe, said one defense official. In fact, Secretary of State Antony Blinken has already spoken several times with his Saudi counterparts and last week strongly condemned Houthi attacks on a Saudi airport.

“The delicate balance here is that while there is bipartisan consensus that U.S. military support to the coalition in Yemen has not changed anything and has only exacerbated human suffering in Yemen … there is not a bipartisan majority calling for the cutoff of support that would help the Saudis defend themselves,” the official said.

Biden has also signaled that the U.S. would take a leading role in negotiating a diplomatic solution to the war in Yemen, naming a veteran U.S. diplomat, Tim Lenderking, as America’s special envoy for the conflict.

During a briefing with reporters on Tuesday, Lenderking said a “negotiated settlement” is the only way to end the conflict, while being careful to condemn the recent Houthi attacks.

“These attacks against civilian infrastructure are not the actions of a group that claims it wants peace and they must stop,” he said. “Unless and until the Houthis change their reprehensible behavior, their leaders will remain under significant U.S. and international pressure.”

Biden and his team have “made clear we’re not going to allow Saudi Arabia to be target practice,” he said.

And in a sign that Riyadh may be trying to curry favor with the new administration, officials released prominent women’s rights activist Loujain al-Hathloul, best known for challenging the ban on women driving, from prison after nearly three years.

But even so, as the new administration settles in, there are few signs that the military intends to shift gears. Just days after Biden’s inauguration, McKenzie traveled to Saudi Arabia, where he announced a new agreement with Riyadh to use various airfields and seaports in the country’s western regions.

The review of worldwide deployments is designed in part to assess the continued threat from Iran, and how to best reassure partners that the U.S. is committed to maintaining stability in the region.

But in the meantime, the message from Central Command has been consistent. In public remarks last week, McKenzie noted the continued attacks on Saudi Arabia by Iranian proxies and pledged to continue U.S. military support to defend against future incursions.

“Nothing that has been said or done means that we are not going to continue to engage Saudi and our other coalition partners,” McKenzie said last week. “Our focus there is going to be to do things to help them defend themselves more effectively and efficiently and there’s a common threat there and that threat is Iran.”

And while Biden announced an end of U.S. military support to the Saudi-led coalition’s offensive operations in Yemen this month, intelligence sharing related to defending the Kingdom will continue, the Pentagon has said.

McKenzie “is continuing as is,” a former defense official said in reference to the push for expanded U.S. military presence in Saudi Arabia. “I hope the Biden people think it’s nuts. It’s just going to raise tensions to put all these people in there. But the Saudis expect it.”

Nahal Toosi contributed to this report.