‘Very strong’ reading of coronavirus in wastewater from Adelaide’s CBD

Iran’s target: An Israeli ship or the nuclear deal?

‘Just putt it out’: Twitter laughs at Trump’s cheat move in golf

Unwavering QAnon followers continue to fervently cling to the discredited conspiracy theory following the second acquittal of former President Donald Trump with some declaring it is still part of the supposed plan to overthrow a secret cabal running the U.S.

Subscribers to QAnon Telegram channels with thousands of followers heaped praise on the former White House occupant and appeared unshaken in their belief that Donald Trump will expose an international elite Satan-worshipping cannibalistic pedophiles, despite President Joe Biden now sitting as President.

The disproven QAnon conspiracy centered on an alleged top-level government official with Q clearance giving information to followers via ‘Q drops’ that detailed how the supposed grand plan would fall into place.

Many ex-followers abandoned the conspiracy after the so-called ‘Storm’ that would see the arrest of Hollywood actors, high-profile Democrats and government officials never came to pass after Biden was sworn in as the 46th President on January 20.

But plenty of others continue to follow the conspiracy and were delighted that Trump avoided impeachment a second time when only seven Republicans sided with Democrats to convict him on Saturday. Democrats needed another 10 Republicans in order to lead to a successful conviction and ban Trump from running for office in 2024.

In one 40,000-subscriber-strong account, littered with anti-Semitic posts, dozens of followers shared QAnon-inspired memes and posts that referred to Trump’s previous speeches and the outlandish claim Q predicted Trump would be acquitted.

One follower said: “This plan is truly incredible. Not many people considered that losing the election would be a part of it. But now, as people realize that, it will open avenues of awakening in many directions. ‘This is not another 4-year election’ takes on a whole new meaning.” 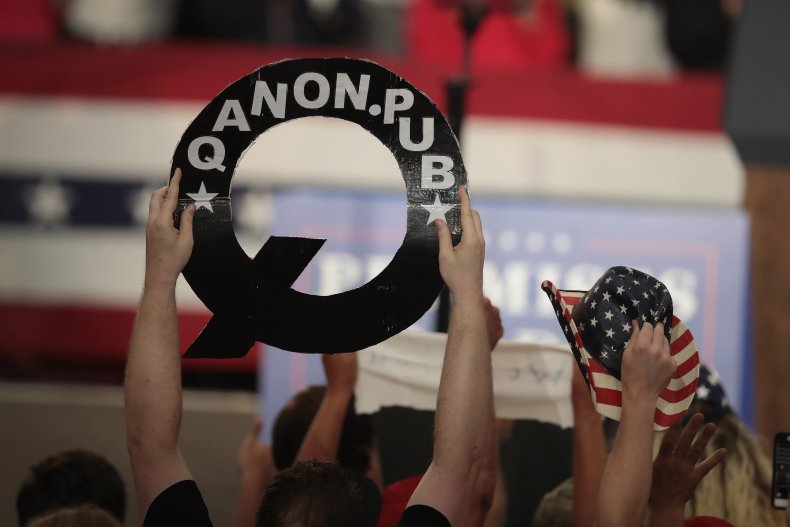 QAnon followers continue to cling to the conspiracy. In this photo Guests cheer for President Donald Trump as he speaks at a rally to show support for Ohio Republican congressional candidate Troy Balderson on August 4, 2018 in Lewis Center, Ohio Scott Olson / Staff/Getty

Another said: “Q time travels. There are no coincidences! Q is not predicting he is traveling and coming back and reporting. He has been 100 percent accurate on everything, he’s seeing it. Truth.”

QAnon channels outside the U.S. also remain active in supporting the conspiracy and continue to repeat the movement’s mantra of keeping to the supposed plan.

A commenter on an Italian language QAnon channel with nearly 30,000 subscribers said following Trump’s acquittal: “Whatever happens, trust the plan. We are on the right side. WWG1WGA [where we go one we go all].”

Others shared photoshopped images of Trump sitting in front of numerous display monitors in Mar-a-Lago or standing in front of an American flag, stating he was “still the President”.

The Anti-Defamation League has described QAnon as “an amalgam of both novel and well-established theories, with marked undertones of anti-Semitism and xenophobia.”

It added: “QAnon adherents have been linked to acts of murder, violence, kidnapping and public disturbance…While most QAnon believers are not violent and limit their involvement to furthering the conspiracy online, a number of real-world events have borne out the FBI‘s warning.”

Ardent followers of QAnon have also seen their family connections fracture as they continued to devote more time to the debunked conspiracy theory.

Danielle Marshall, who described her mother as a QAnon follower, described watching her loved one fall deeper into the conspiracy as “heartbreaking.”

She told CNN: “Sometimes you feel more disappointed, it is just so illogical and so extreme that anger doesn’t even feel like the right emotion. It is heartbreaking but there is nothing I can do to bring her back to a place of reason.”