Israeli-owned ship hit by explosion to be assessed in Dubai

History professors reflect on how 2020 may be remembered

Why Donald Trump’s allies may fear his upcoming speech

Donald Trump will protest the 2020 election for years; CPAC is here to help him spread his conspiracies

While pundits ponder the GOP’s future — and traditionalists hope to change course out of the wreckage left by Trump’s insurrection — Washington’s power players and state activists have already made their choice.

Highlighting the former President’s lightning fast rehabilitation, the House Minority Leader Kevin McCarthy will visit Trump in Florida on Thursday after repudiating his own criticism of the incitement of the US Capitol riot.

Only a week after Trump left the White House, it’s clear that his party is not ready to let him go. Extremists and Trumpists are on the rise, while lawmakers who condemned his aberrant conduct fight for their political careers. The anti-Trump wing — represented by members of Congress such as Sens. Ben Sasse of Nebraska and Mitt Romney of Utah and Illinois Rep. Adam Kinzinger — look like a small and outmaneuvered force.

This week’s sorting will have significant implications for the GOP’s positioning as it heads into the 2022 midterm elections, and for President Joe Biden’s hopes of draining the poison from Washington in the name of national unity.

But it will also pose a fundamental question for the Grand Old Party itself. Is yet another doubling down on grassroots fury and the Trump base the best way to win back Americans? Especially those in suburban areas who rejected the ex-President who lost the House, the Senate and the White House in a single four-year term?

A jazzed turnout by the pro-Trump base is vital to GOP hopes of winning the House in the 2022 midterms. But there is also a chance that a flurry of fervently pro-Trump Senate candidates in swing states could damage the party’s hopes of overturning the thin Democratic majority in the chamber.

Trump is gone but the party is still his 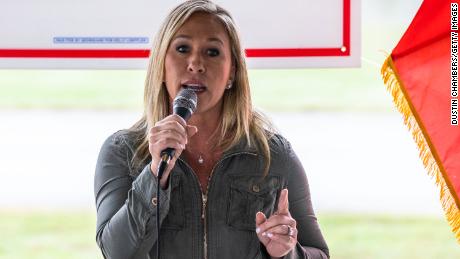 Across the country, Republican leaders are reacting to Trump’s exit by intensifying the political revolution that transformed the party in his image, censuring and marginalizing those deemed disloyal to a defeated and twice-impeached ex-President.

In a key impeachment test vote this week, 45 GOP senators signaled that they plan for Trump to pay no price for inciting the most heinous assault by a president on the US government in history in the Capitol riot.

McCarthy, who humiliatingly walked back his earlier tepid criticism of Trump, has traveled to Florida for an audience as he seeks to make amends to the former leader in his palace in exile.

In another sign of the GOP’s future course, Georgia Rep. Marjorie Taylor Greene was not censured by her party after CNN’s KFile reported that she expressed supporting in recent years assassinations of Democratic leaders before she ran for Congress. McCarthy plans to have a word with the congresswoman over what his spokesman in a statement Wednesday evening called the “deeply disturbing” comments. Axios was first to report the statement and McCarthy’s plans to speak with Greene.

But the QAnon adherent’s rocketing rise as a prominent face of a party in the thrall of lies and outlandish propaganda does not seem in danger. In fact, Greene, was rewarded with a plum committee assignment.

Alarmed by splits in his party, McCarthy has ordered his troops to “cut that crap out” and focus on Democrats, CNN reported Wednesday. It is not clear whether his admonition applies to pro-Trump Rep. Matt Gaetz of Florida, who is traveling to Wyoming to slam the GOP’s No. 3 House leader Liz Cheney, who voted to impeach Trump, on her own turf.

Remnants of the old GOP — such as former George W. Bush aide Rob Portman — who are unwilling to sign up to the unhinged populism that now drives the party of Lincoln have nowhere to go. The Ohio senator announced this week that he will not run for reelection.

But in Arkansas, former White House press secretary Sarah Sanders is wearing her wars with the Washington media in her dishonest tenure as a badge of honor to appeal to the fervidly pro-Trump base in a gubernatorial run.

And in Arizona, Oregon and Pennsylvania, anti-Trump Republicans such as Cindy McCain are being purged while Trump loyalists take prominent positions and state officials who stood firm against the former President’s efforts to overturn Biden’s election win come under extreme pressure.

‘Time to stand up’ 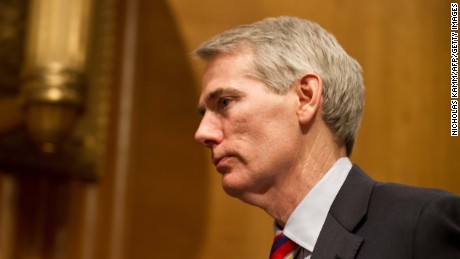 Former Ohio Gov. John Kasich, who is now a CNN commentator, said on “The Situation Room” that the GOP needed to move swiftly against Greene and compared the failure of leaders to honor its values with the courage shown by detained Russian opposition leader Alexey Navalny.

“They are worried about losing an election or not winning a majority,” Kasich said. “These folks have to stand up and say this is not our party, we disavow this and this is unacceptable to us.”

The lesson of the Trump era is that where there is a choice in the GOP between its values and power, Power always wins. But the party’s descent into the sewer of election lies is coming with an increasing price for the rest of the nation. The Department of Homeland Security on Wednesday issued a rare threat bulletin related to domestic terrorism Wednesday warning of the potential for violence by extremists emboldened by the US Capitol attack.

The warning cited the presidential transition “as well as other perceived grievances fueled by false narratives” as potential catalysts for uprisings. Those narratives were pushed for weeks by Trump and his Republican enablers in Washington and still find a home in sections of the conservative media.

The GOP’s embrace of the departed Trump is perfectly logical, even if it leaves Republican lawmakers in awkward positions as they let his crimes against the Constitution slide along with lies that the 2020 election was stolen from him.

The former President has long enjoyed elevated approval ratings in his party that have protected him from the consequences of his unconstitutional power grabs and failures among Republicans leaders he bullied for years. Their discomfort when confronted by the Washington media pales by comparison to the fury of grassroots voters back home if they break with the ex-President.

Still, a CNN/SSRS poll published just before he left office, found however that 48% of Republicans wanted to move on from Trump while 47% hoped that he would continue to be regarded as the leader of the party.

The clarity offered this week — including McCarthy’s pilgrimage to Mar-a-Lago — suggests that party leaders and rank-and-file members believe that any blip in Trump’s popularity after the Capitol mob attack was only temporary.

And McCarthy’s strategy makes clear he views the Trump base as critical to seizing what history suggests is a strong chance of winning back the House for the GOP in the midterms of a new president’s first term in 2022.

He may also be making a judgment that corporate donors who halted PAC contributions to GOP lawmakers who refused to certify Biden’s election win will return to the fold with the potential prospect of a Republican House majority from 2023.

Why the GOP never dumps Trump 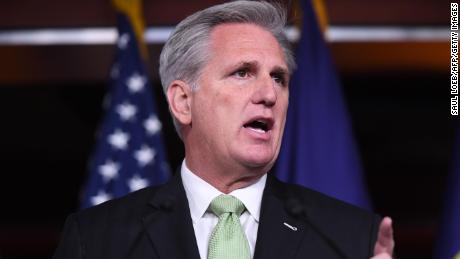 McCarthy to visit the former president in Florida, showing where he stands in a post-Trump Republican Party

Power has always been a key motivating factor behind the Senate GOP’s pained support for the ex-President and its unwillingness to constrain him or punish his transgressions when he was in office.

Any senator who wants to avoid a primary challenge has no practical choice but to demonstrate total loyalty to Trump.

Florida Sen. Marco Rubio, whose presidential dreams were crushed by the former reality star in 2016, was long seen as the poster boy for a new, more optimistic and inclusive GOP. A career trajectory that now has him standing strongly with Trump and branding impeachment as all about “vengeance from the radical left” is an apt personification of the transformation Trump wrought in the party. It may also have something to do with chatter about a possible primary challenge from Ivanka Trump.

Senate Minority Leader Mitch McConnell was among the most distraught Republicans over the attack on his beloved US Senate incited by Trump in his effort to thwart the constitutional transfer of power to Biden.

The Kentucky senator even made it known that he was thinking of voting to convict Trump of high crimes and misdemeanors in his Senate trial. He has yet to say what he will decide. But on Tuesday, McConnell was among the senators who voted, unsuccessfully to dismiss the case on the dubious grounds that it is unconstitutional to try a former President who was impeached while in office.

The vote reflected increasing confidence among Trump’s Washington acolytes that he will escape a conviction that would preclude him from running for federal office in the future.

Another key Republican figure, former US Ambassador to the United Nations Nikki Haley, who expertly engineered her exit from Trump’s administration with the ex-President’s blessing, has walked back her tame earlier criticism of Trump after the insurrection. Now, Haley who is clearly laying the ground for a run for president in 2024, is painting the President who tried to destroy American democracy as the victim.

“I mean, give the man a break,” Haley said on Fox News.