‘I don’t want to lose you’: A shocking self-elimination might rock your ‘Bachelor’ bracket

Secretary of State Mike Pompeo’s statements were tempered by some U.S. officials, who said there was little new intelligence to suggest that Iran was an active headquarters for the terrorist group.

On Tuesday, Secretary of State Mike Pompeo said Al Qaeda’s new base of operations is inside Iran, however, he offered no underlying intelligence as evidence and his conclusions were contradicted by other American officials.

Al Qaeda has a new home base. It is the Islamic Republic of Iran. As a result, Bin Laden’s wicked creation is poised to gain strength and capabilities. We ignore this Iran-Al Qaeda nexus at our own peril. America has far less visibility on Al Qaeda’s capabilities and their activities, that than we did on their activities when they were in Tora Bora or even in the mountainous regions of Pakistan. Let’s not tolerate Iran giving Al Qaeda a second wind. Let’s not downplay the danger of Sunni-Shia cooperation in terror. Let’s not lie to the American people about Iranian moderation, and pretend appeasement will work. Thirty years of cooperation shows that Iran and Al Qaeda’s divergent theology is no match for its convergent hatred. 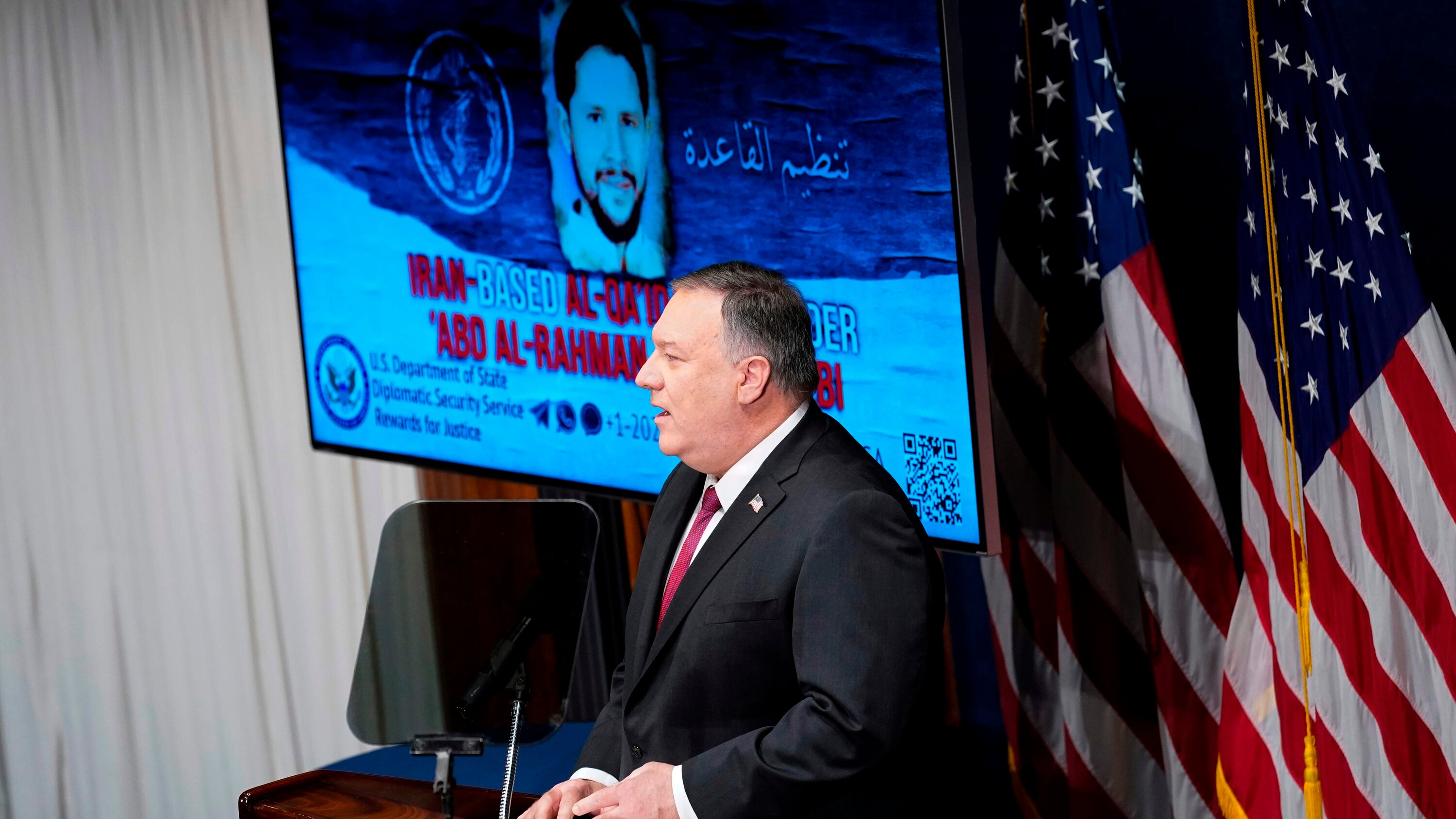 On Tuesday, Secretary of State Mike Pompeo said Al Qaeda’s new base of operations is inside Iran, however, he offered no underlying intelligence as evidence and his conclusions were contradicted by other American officials.CreditCredit…Pool photo by Andrew Harnik

WASHINGTON — Al Qaeda’s new base of operations is in Iran, Secretary of State Mike Pompeo said on Tuesday, using his last days in office to tie together two of what he called the world’s greatest terrorism threats but offering no underlying intelligence as evidence.

His conclusions were quickly tempered, and even contradicted, by some current and former American officials who said there was little new intelligence to suggest that Iran was any kind of active headquarters, much less a hub where Al Qaeda’s leaders can direct operations with the support of the government in Tehran.

Mr. Pompeo, who was President Trump’s first C.I.A. director for a year, called Iran “the new Afghanistan” for Qaeda militants. He described the ties between Tehran and Qaeda leaders in much starker terms than what most counterterrorism officials view as a very complicated relationship.

“They are partners in terrorism, partners in hate,” Mr. Pompeo told an audience at the National Press Club in Washington, where he did not take questions from journalists afterward.

“The time is now for America and all free nations to crush the Iran-Al Qaeda axis,” he said, crediting the Trump administration for making progress on that front.

Mr. Pompeo spoke alternately about Al Qaeda’s “new home base” and a “new operational headquarters” in Tehran, bewildering counterterrorism officials, who said there was no evidence for his assertions. Some said his comments appeared to represent his own analytic conclusions, rather than those of the United States intelligence community.

Mr. Pompeo cited a “sea change” in the ties between Sunni-led Al Qaeda and Shiite Iran after 2015, when he said the clerical government in Tehran had allowed the terrorist network’s senior operatives to centralize inside their borders.

He said Iran had given travel documents, identification cards and passports to Qaeda militants and allowed them to move freely around the country. He also confirmed for the first time a New York Times report in November that Al Qaeda’s second-in-command, Abdullah Ahmed Abdullah, who went by the nom de guerre Abu Muhammad al-Masri, was assassinated in Tehran in August.

At some point before Mr. al-Masri’s death, the C.I.A. concluded that he and another senior Qaeda leader in Iran, Saif al-Adl, reorganized Al Qaeda’s global management structure and placed a renewed priority on plotting attacks, according to a senior State Department official who briefed reporters after Mr. Pompeo’s speech. The official would not give a date or approximate time frame for the C.I.A. assessment, saying only that it had happened after 2015 and was sent to the State Department in the past week.

Other American officials who spoke on the condition of anonymity to discuss intelligence said the confirmation of the al-Masri assassination was the core of any new or specific information that Mr. Pompeo revealed on Tuesday.

But it gave the secretary of state yet another platform to criticize Iran — a mainstay of his policies. That prompted swift pushback, including from Mohammad Javad Zarif, the Iranian foreign minister, who on Twitter accused Mr. Pompeo of “pathetically ending his disastrous career with more warmongering lies.”

Much of Mr. Pompeo’s speech, some American officials cautioned, represented an inflated rehash of information about the ties between Al Qaeda and Iran that has long been known.

“The relationship between Al Qaeda and Iran is far more complicated than the picture laid out by Secretary of State Pompeo,” said Colin P. Clarke, a counterterrorism analyst at the Soufan Group, a New York-based security consulting firm.

Analysts also pointed out that even as Mr. Pompeo heralded a new dawn for Al Qaeda, in March he had dismissed Al Qaeda’s significance in arguing why the United States should support a peace deal with the Taliban that called for withdrawing troops from Afghanistan.

“Al Qaeda is a shadow of its former self,” Mr. Pompeo said then.

It is true that Iran has consistently and unconvincingly denied housing Qaeda officials.

Terrorism experts have suggested that Tehran allowed Qaeda officials to remain in Iran after the attacks of Sept. 11, 2001, as insurance that the group would not conduct operations in the country. American counterterrorism officials believe Iran may have allowed them to stay to run operations against the United States, a common adversary.

Bahram Ghasemi, an Iranian Foreign Ministry spokesman at the time, said in 2018 that because of Iran’s long, porous border with Afghanistan, some Qaeda members had entered Iran, but they had been detained and returned to their home countries.

Osama bin Laden’s son Hamza bin Laden and other members of his family were freed by Iran in 2011 in exchange for an Iranian diplomat abducted in Pakistan. White House officials said in 2019 that Hamza bin Laden had been killed in a counterterrorism operation in the Afghanistan-Pakistan region.

Mr. al-Masri was one of the few high-ranking members of the organization to survive the American hunt for the perpetrators of 9/11 and other attacks. When he and other Qaeda leaders fled to Iran, they were initially kept under house arrest.

In 2015, Iran announced a deal with Al Qaeda in which it released five of the organization’s leaders, including Mr. al-Masri, in exchange for an Iranian diplomat who had been abducted in Yemen.

In his speech, Mr. Pompeo said surviving deputies to Al Qaeda’s spiritual leader, Ayman al-Zawahri, were “living a normal life” in Tehran. He said the Iranian government was allowing Qaeda militants to communicate with one another, raise funds and carry out other operational functions that were previously done from Afghanistan and Pakistan.

He announced new sanctions against two Iranian-based Qaeda officials — Muhammad Abbatay, who is also known as Abd al-Rahman al-Maghrebi, and Sultan Yusuf Hasan — and three leaders of a Kurdish offshoot of Al Qaeda who operate on the Iraq-Iran border.

Mr. Pompeo also announced a $7 million reward for information leading to the arrest of Mr. al-Maghrebi, who is Mr. Zawahri’s son-in-law. State Department officials would not comment on Mr. Zawahri’s whereabouts, including whether he was in Iran.