In Saudi Arabia, Quiet Changes May Ease Tensions With Biden

BLOOMINGTON, Ind. – The question had to be asked last week, and Indiana offensive coordinator Nick Sheridan seemed a bit annoyed by it. Indiana’s running game, which couldn’t muster even a single yard in the loss to Ohio State, was being criticized.

Was it execution? Scheme? Play-calling? All of the above? At some point, isn’t there something better than a run up the middle? Indiana’s running game, averaging just 76 yards a game, ranked near the bottom (123rd out of 129 teams) nationally.

Saturday against Maryland, we got something better.

The run game, it was creative. It was innovative. And, mostly, it was successful. The Hoosiers rolled up a season-high 234 yards on the ground and did it in a variety of ways, with the Wildcat, with new looks, and with new purpose.

And with new people. 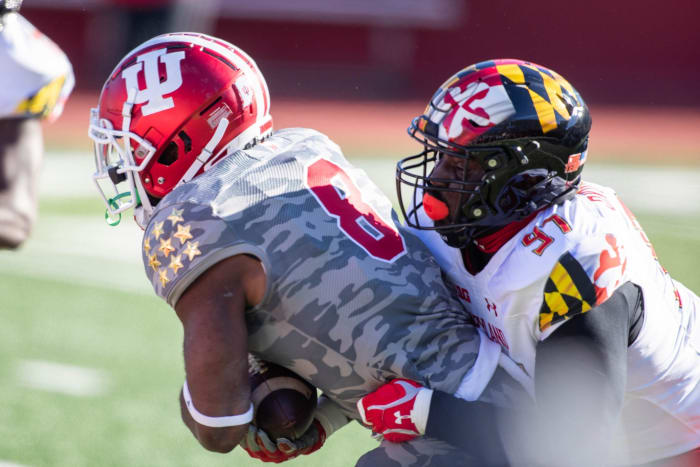 Stevie Scott has his first three-touchdown game for Indiana on Saturday during the Hoosiers’ win over Maryland. (USA TODAY Sports)

Oh, there was ol’ Steady Eddie, of course. Junior running back Stevie Scott, the Big Ten’s active leader in rushing yards and touchdowns, had 80 yards and three scores, and the man knows how to find the end zone.

But we also had a new face. With sophomore Sampson James not available for some undisclosed reason, true freshman Tim Baldwin burst onto the scene and had 106 yards on 16 carries in the Hoosiers’ 27-11 win.

Manhood challenged, from the offensive line to the backs themselves and even the offensive coordinator, the Hoosiers answered the bell. Challenge accepted. The offensive line got the game ball at the end. They’re now 5-1 with two games to go, and plenty still at stake.

“I’m very proud of our offensive line for the way they responded,” Indiana coach Tom Allen said. “Our challenge all week was to run the football. (Maryland) loaded the box, and I knew they were going to make it hard on us, especially early. But we just kept kind of chipping away at it and made some adjustments at halftime. I was. just really, really happy with that unit, with Coach (Darren) Hiller.”

Baldwin became the 14th true freshman to have a 100-yard game for the Hoosiers. He’s mature beyond his years, and everyone has been raving about him all summer. He’s learned the offense quickly, and he fits right in. He’s quick into holes, and quick out of them as well. He was a breath of fresh air in the running game, to be sure.

“Shout-out to the O-Line, they did block their tails off today, said Baldwin, a freshman from Nokesville, Va. ”Honestly, I was just trusting the O-Line and trusting the work we put in as running backs and trusting that the coaches are going to make the right call and put us in good positions depending on the angles of the defense and depending on how they fit the run. I think it all just played in our favor today.”

Baldwin said the veterans in the running back room have eased his transition into college football, as has his position coach, Mike Hart, who’s one of the best in the business.

“They’ve helped me a lot. Stevie, Sampson, David Ellis, all the running backs are helping make sure I am a college running back,” Baldwin said. “The way I came in, I was just bursting through the holes, not reading anything. It took me a while to learn patience. You saw what I was able to do today.”

Yes we did, and it came at a perfect time. 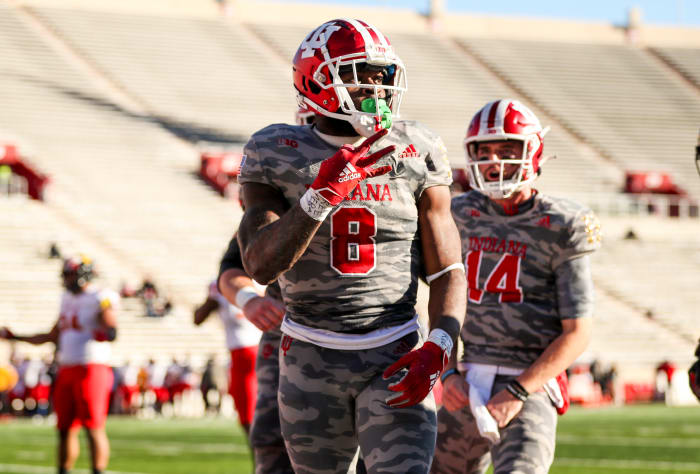 It was perfect, because the Hoosiers were really struggling to move the ball through the air, which was a surprise considering quarterback Michael Penix Jr. torched Ohio State for 491 yards last week. Penix had only two first-half completions in 15 tries, and the running backs needed to pick him up.

It was role reversal, for the first time all season.

“At the end of the day, it’s just all about making plays, and going there and being a playmaker,” Scott said. “If our quarterback is throwing bad, then it’s our job to uplift him and just try to put the team on our back and try to make as many plays as we can until he can get fired up again and get things rolling.”

“It’s something we’ve been working on before the start of the season, but we just kind of never have really gotten to it in the games,” Scott said. “It was just something that me and a lot of the running back were pointing at with Coach Sheridan, that we felt like like that was something different that we could run with the offense.

“We ran it a lot in practice just to get everything down pat and make sure we could execute the play, so when we come into the game we could be able to run it with no worries. I feel like practice makes perfect and every time we ran it today, it just felt like practice.”

The 234 yards on the ground was their most in 14 games, dating back to Oct. 12, 2019 when they had 260 yards against Rutgers. They had 237 against Virginia in early 2018, the day Scott, as a true freshman much like Baldwin, made his first splash in the Hoosiers’ program.

“Some guys have a knack to find the holes, and I’ve been impressed with him in practice. I’ve said that before,” Allen said of Baldwin. “We were not at all shy about putting him in there.

“Our whole offensive staff has a lot of confidence in Tim. He’s a very conscientious young man. He’s extremely smart, and he works very hard.”

With the win, the Hoosiers moved to 5-1 in the Big Ten, which is basically uncharted territory. It’s their best conference start since 1987, when they were also 5-1. They’ve clinched a winning record for the second straight season, the first time that’s happened since 1987-88. That’s only happened six times — ever.

If the Hoosiers can win the last two, that would be seven wins, which has NEVER happened in the century-plus of Indiana football.

But this also what was expected when Tom Allen took over. He saw the potential in this program, and he’s convinced the players of such as well. His vision is now theirs. And it’s paying off in victories, one week after another.

That 5-1 mark this season has all come against Big Ten East foes. That line of demarcation between the haves and the have nots? This year, the Hoosiers have blown that to smithereens. They have arrived.

“This was something that me and my guys talked about since I got to IU, since my freshmen year and seeing this program change,” Scott said. The athletes we’ve been bringing in to change the culture, that’s been an exciting.

“I feel like we’re still breaking through, and at the end of the day we still need to finish this season strong and just play every game with no worries and a positive mindset that we can dominate every team. We’ve just got to keep striving for greatness.”