How Colbert, Kimmel and Fallon plan to adapt to life after Trump

The Right to Education in Iraq – Part Two: Obstacles to Girls’ Education after ISIL [EN/AR]

Trump’s niece, Mary, says she is ‘prepared’ to change her last name in a bid to distance herself from the former president

Heat to use COVID-sniffing dogs to screen fans

As President Donald Trump spends most of his post-election time out of the limelight, Twitter has become his primary means of communication. But instead of having an unfiltered voice, Twitter has been aggressively labelling the misleading and false information he regularly posts.

For example, on Saturday, 15 out of Trump’s 28 tweets were flagged by Twitter as his comments about fraudulent and illegal voting were marked as “disputed”. On Sunday another five out of 10 tweets were tagged.

Twitter’s labels announced that “this claim about election fraud is disputed” and “multiple sources called this election differently” as Trump continued to tout conspiracies about ballots and also claimed victories in states where Biden has been projected to win or, in some cases, such as Georgia, the outcome has been certified in Biden’s favour.

Twitter has flagged 152 out of Trump’s 578 total tweets and retweets since Election Day, November 3.

Twitter’s history with Trump, the most active US president on social media, has been a controversial one.  Many social media sites like Facebook and Twitter have come under fire for their handling of misinformation, especially when it is being amplified by public figures with large followings.

Last year, Twitter detailed their process of flagging misinformation, admitting that “In the past, we’ve allowed certain Tweets that violated our rules to remain on Twitter because they were in the public’s interest, but it wasn’t clear when and how we made those determinations.”

Twitter flagged a Trump tweet for the first time on May 26, 2020, when he tweeted that mail-in ballots would be “substantially fraudulent”.

Now, as it has continued to mark some of the president’s content as disputed, Twitter has come under scrutiny from some Trump backers asking the company to provide a more comprehensive rationale for what they do and do not single out.

During a Senate hearing last week, Twitter CEO Jack Dorsey testified alongside Facebook CEO Mark Zuckerberg about the measures their sites were taking to prevent the spread of misinformation about the election.

Dorsey described Twitter’s “civic integrity policy” as a preventative measure to ensure that users don’t “use Twitter’s services for the purpose of manipulating or interfering in elections or other civic processes”. He described the process as a way to “put a label on [misleading speech], pointing to the broader conversation. Our goal is to connect people with more information around what’s happening with the election.”

When presented with allegations from Republican senators that their policies favoured left-wing opinions and policies, Dorsey responded, “We don’t want to put ourselves in a position of calling an election. That is not our job, so we’re pointing to sources and pillars that have traditionally done this in the past, and that is the intention of the policy. That’s the intention of the labelling system.” 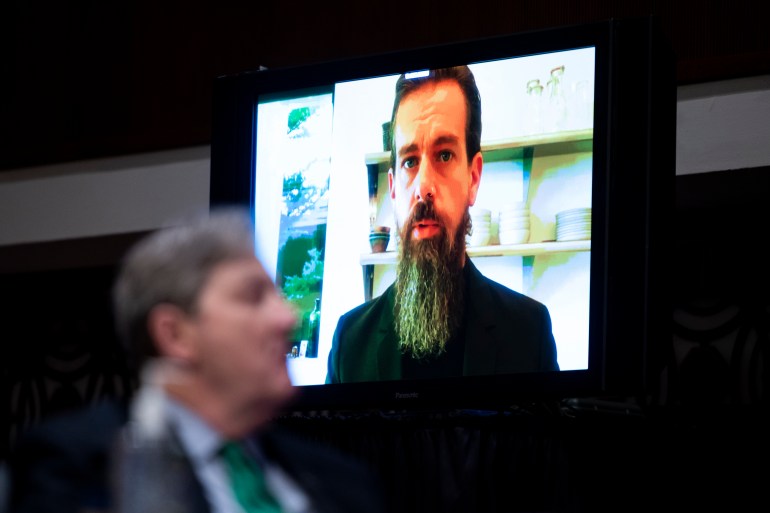 Twitter CEO Jack Dorsey testifies remotely during a Senate Judiciary Committee hearing in Washington, DC on Facebook and Twitter’s actions around the closely contested election [Bill Clark/Pool via AP]What happens to Trump when he is no longer president? Dorsey indicated that different standards will be applied to Trump as a private citizen:

“We do have a goal around public interest where for global leaders, we do make exceptions in terms of whether, if a tweet violates our terms of service, we leave it up, but we leave it up behind an interstitial. And people are not allowed to share that more broadly, so a lot of the sharing is disabled with the exception of quoting it so that you can add your own conversation on top of it. So if an account suddenly is not a world leader any more, that particular policy goes away.”

Without a presidential title, Trump’s tweets may no longer qualify as “public interest exceptions”  since he will become a private citizen following Inauguration Day on January 20th. This loss of the protections leaves Trump’s account vulnerable to suspension or a ban – the same restrictions that would apply to the general public.