New coach Nash might be only mystery for strong Nets squad

Women are more likely than men to develop heart failure or die after a heart attack, study says

My Two Cents: Only Took 4 Years for Race Thompson to Become Overnight Sensation

Donald Trump has taken his campaign to deny the results of the US presidential election global, telling leaders at the G20 summit he’s looking forward to going on working with them.

The gathering of leaders of major world economies is being held online this year, but could have been an occasion for Trump to bid his peers goodbye and pledge American support in the battle against Covid-19. Instead, according to audio of his comments obtained by the Observer, he said: “It’s been a great honour to work with you, and I look forward to working with you again for a long time.”

He went on to boast about the US economy and military, and repeated false claims that his government’s Operation Warp Speed was behind both the first two successful coronavirus vaccines. Warp Speed provided funding for development of the vaccine produced by Moderna, but not the Pfizer vaccine, which was developed without US government help.

It was in stark contrast to comments from other leaders, which focused on the pandemic. One source said: “His was the anomalous speech. Everyone else talked about global matters of life and death.” 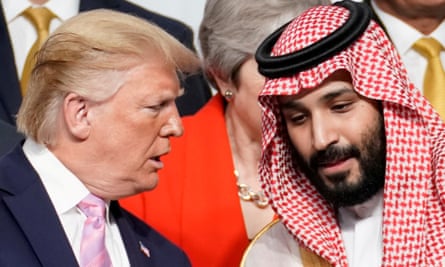 Most national leaders cited the World Health Organization and ACT Accelerator, which aims to speed up treatment and vaccines for Covid-19 and ensure equitable global distribution, a source said. A number also reflected on how countries had failed to help each other during crisis moments of the pandemic. Trump, who pulled the US out of the WHO, did not mention either organisation, but said America would ensure “domestic needs are met” before working on vaccines for the rest of the world.

No speaker made direct reference to Joe Biden’s winning at least 6 million more votes than Trump and the electoral college by 306 votes to Trump’s 232. Trump has refused to concede, instead making baseless claims of voter fraud in an attempt to overturn the result of the presidential election so that he can remain in office – a power grab without precedent in modern American history.

After opening remarks, G20 leaders held a session on pandemic preparedness and response, mostly involving pre-recorded speeches. By then, Trump had left for his golf course in Virginia and no US official spoke on the issue.

The G20 summit is being hosted by Saudi Arabia, which had hoped to use it to showcase changes in the kingdom and rehabilitate the image of Crown Prince Mohammed bin Salman after the murder of journalist Jamal Khashoggi by a Saudi hit squad. However, the summit has been overshadowed by concerns about its human rights record, especially the fate of jailed female activists.