Simsir, making his first start for the local connections, barely held off a pair of top international raiders to win the second running of the Bahrain International Trophy Nov. 20 by a desperate neck.

Global Giant, with Frankie Dettori riding, just missed with a flying finish down the middle of the Sakhir Racecourse stretch. Sovereign, the 2019 Dubai Duty Free Irish Derby (G1) winner, was just another nose back with Ryan Moore riding.

Simsir, a 4-year-old Zoffany gelding bred by the Aga Khan Stud, emerged through the early stages of the 2,000-meter (about 1 1/4-mile) International Trophy as the only challenger to breakaway longshot leader Coolagh Forest IRE). That pair opened a big lead over the other 12 heading toward the stretch run.

Jockey Lee Newman sent Simsir past the fading Coolagh Forest with some 300 meters left and looked an easy winner. But the needle was bouncing off the “empty” peg in the final 100 meters with Dettori and Moore in hot pursuit. Both rivals were ahead of the winner within jumps of the finish.

“I took the bull by the horns at the five-furlong pole and kicked on from there,” Newman said. “It’s a track that you can do that at if your horse is a galloper, and he is that. It is down to (trainer Fawzi Abdulla Nass) for putting his trust in me as he could have asked any jockey from anywhere in the world, but he asked me. I am delighted.”

Port Lions, Simsir’s stablemate, was fourth in a pleasing outcome for Bahraini interests who chose well in selecting runners for their race. Simsir previously raced for the Aga Khan and Port Lions for Godolphin. 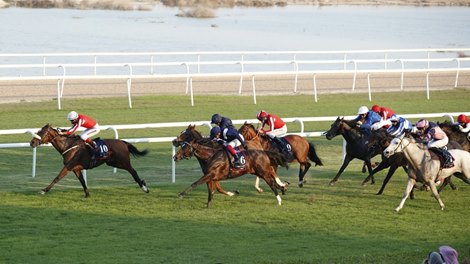 “To win such an amazing race is an absolute thrill,” Nass said. “He has done it so bravely. (Former trainer) Mick Halford always assured me that he likes it firm, and he was right. For me, it was the jockey’s race. I thought he committed early in the straight, but he proved me wrong.”

Simsir scored his fourth win from 10 starts but first since Feb. 27, when he led home a quartet of Godolphin rivals in a handicap at Meydan Racecourse in Dubai. He had never faced rivals of the caliber of Global Giant or Sovereign.

Global Giant, a 5-year-old son of Shamardal, campaigned in England during the 2020 season under the care of John Gosden, winning a listed race at Newbury in July.

Sovereign, a Galileo colt from the Danehill Dancer mare Devoted To You, was out of action for nearly a year after his surprise win in the Irish Derby. His best effort in four races since the return was a second, 5 1/2 lengths adrift of Enable, in the QIPCO King George VI and Queen Elizabeth Stakes (G1) at Ascot July 25, a race with only three starters.

Sovereign was supplemented to the Bahrain showpiece race with trainer Aidan O’Brien predicting about the opposite of how his colt eventually would run. “He is a very strong galloper who likes to go forward in his races,” O’Brien said.