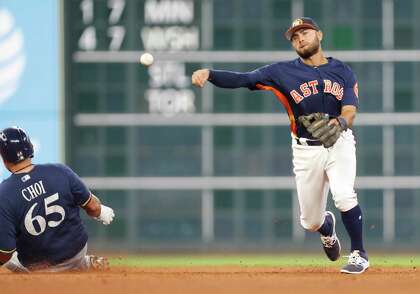 The Astros thinned their 40-man roster on Friday afternoon, losing utilityman Jack Mayfield to the Atlanta Braves and righthander Rogelio Armenteros to the Arizona Diamondbacks via waiver claims.

Houston now has five open spots on its 40-man roster and is expected to use all of them by the 5 p.m. deadline to protect Rule 5 eligible players.

A mainstay in the Astros’ minor league system since 2013, Mayfield made an incredible journey from undrafted free agent to major leaguer. He debuted in 2019 at Minute Maid Park and appeared in 47 games between 2019 and 2020.

Defensive versatility kept his roster spot secured even amid an uneven offensive showing. Mayfield had a .481 OPS in 112 major league plate appearances. Nicknamed “Super Jack” for his ability to play all around the infield, Mayfield made major league starts at second base, third base and shortstop.

Armenteros underwent surgery in March to remove a bone spur in his right elbow. He did not appear in 2020, but threw 18 major league innings in 2019.