Dark warnings by scientists and new data showing a nationwide explosion in a virus Trump says is going away, crashing stock markets and real-time examples of the White House’s delusions about its failed response are consuming the President as tens of millions of early voters cast judgment.

The extent to which the country’s worsening trajectory has overtaken the final days of the campaign emphasizes how the election has become a personal referendum on Trump and how he mishandled the worst domestic crisis in decades.

The roots of his current difficulties were bedded down months ago.

“Trump’s now back in charge. It’s not the doctors,” the first son-in-law and White House adviser, Kushner, said back in April in tapes of interviews with Bob Woodward, obtained by CNN.

To win next Tuesday, the President will have to convince sufficient Americans to build an Electoral College majority that his populist anti-Washington message, cultural themes, hardline “law and order” rhetoric and claimed expertise in rebuilding the ravaged economy are more important than his botched choices on a pandemic that is getting worse every day.

The President is claiming validation for a strategy that prioritized economics over health in Commerce Department data released Thursday showing a strong rebound over the summer. The economy grew at a record annualized rate of 33.1% between July and September and was up 7.4% quarter on quarter.

“So glad this great GDP number came out before November 3rd,” Trump tweeted.

However, the failure to do more to lower the baseline of viral infections, apart from costing thousands of lives, means that new restrictions on bars, restaurants and other service industries are likely as the pandemic worsens that will threaten the recovery in the longer term — though those effects will unfold after the election.

Stock slump is another blow to Trump 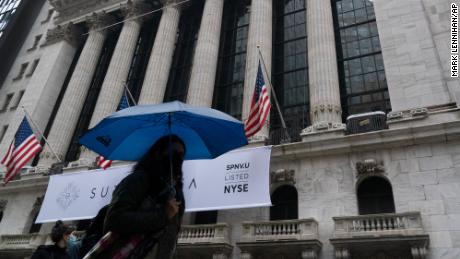 While the coronavirus tightened its grip, the President tried to change the subject, seizing on violence in Philadelphia after another police shooting to blame Democrats for looting.

But another huge slump on Wall Street showed how the election endgame narrative was slipping out of his control. The Dow Jones Industrial Average, one of the President’s favorite metrics for his own performance, was off more than 900 points Wednesday. In early trading on Thursday, the Dow was up by less than half a percent.

And new polling showed few signs that the President is making the kind of late run that helped power his shock win over Hillary Clinton four years ago. A new CNN national survey had Biden leading by 12 points among likely voters. Even a win in the high single digits could assure Biden a comfortable margin in the Electoral College. Other swing state polls in Wisconsin and Michigan also had the Democrat ahead.

The President insisted he was doing “fantastically” in polls and was in better shape than four years ago. Trump appears, however, to face a complicated scenario on the electoral map that would require him to run the table on a string of Southern and Western battlegrounds before a final showdown with Biden in Wisconsin, Michigan and Pennsylvania.

With more than 75 million votes already cast — one-third of registered voters — the chance for a late change to the race is limited, even as the President tried to shore up his far Western power base with rallies in Arizona, a state that could help Biden block his route to 270 electoral votes.

The new recordings of Kushner’s interviews with Woodward for his book “Rage” show in the most intimate detail yet how the President and close aides marginalized government scientists earlier this year in a bid to push economic openings at all cost to help his reelection effort.

In a conversation on April 18, the President’s son-in-law told The Washington Post veteran that Trump was “getting the country back from the doctors” and referred to public health officials as if they were adversaries when he talked of a “negotiated settlement” with them.

Comprehensively misreading the situation, Kushner, who had no previous governing experience to match his elevated influence, also said the US was moving swiftly through the “panic phase” and “pain phase” and was at the “beginning of the comeback phase,” while allowing there was a lot of pain to come for a while.

At the point of the recordings, more than 40,000 Americans had died from the virus. More than 227,000 have now perished, the death toll is rising and hospitals in many states risk becoming overwhelmed.

But Trump told his crowd in Bullhead, Arizona — as usual packed together with little mask wearing — that “people are getting better.”

Biden warns beating the virus is not just ‘flipping a switch’ 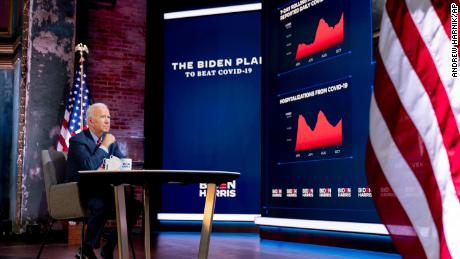 Unlike the President, who is in charge of stemming the latest spike in infections, Biden had a briefing from public health experts Wednesday. He emerged to tell Americans that mask wearing was patriotic, not political, but warned that if he is elected president he won’t be able to end the pandemic by “flipping a switch.” And he drew on his own experience of personal tragedies to console bereaved relatives of Covid-19 victims.

“I know all too well what it feels like to have your heart ripped out, losing a loved one too soon, to sit by their hospital bedside and feel like there’s a black hole in the middle of your chest,” Biden said.

Health experts inside and outside the government made clear that the state of the pandemic was closer to the status report laid out by Biden than the President’s continuing false appraisals.

Dr. Anthony Fauci, director of the National Institute of Allergy and Infectious Diseases, said, “We are not in a good place,” and predicted that even with a vaccine, it would be “easily” late 2021 or into the following year before Americans experience any degree of normalcy. Dr. Scott Gottlieb, a former head of the US Food and Drug Administration, said the US was on a trajectory to “look a lot like” Europe’s current spike by early November.

Trump has been arguing with some justification in recent days that European countries lauded for doing a better job than he is in fighting the virus are now experiencing awful escalations in infections. France imposed a new lockdown starting on Thursday.

But those countries, by aggressively managing the virus, were able to give their populace some respite over the summer, saving thousands of lives. Trump’s push for state openings unleashed a viral surge across the Sun Belt in the summer and the US never returned to the lower levels of infections experienced across the Atlantic.

Several Trump aides on Wednesday tried to defend Trump’s handling of the virus but only served to expose his negligence. Campaign spokesman Hogan Gidley told CNN’s “New Day” that “we are moving in the right direction” after a White House document boasted Trump had ended the pandemic. And Alyssa Farah, the White House communications director, conceded that the choice of words was poor but said the US is “rounding the corner.” 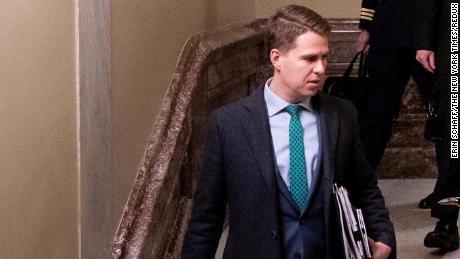 The White House went on the offensive Wednesday after Taylor — who had been chief of staff to then-Homeland Security Secretary Kirstjen Nielsen, revealed he had written the 2018 New York Times op-ed and a book critical of Trump. (He was Nielsen’s deputy chief of staff when the op-ed was published.)

“Issuing my critiques without attribution forced the President to answer them directly on their merits or not at all, rather than creating distractions through petty insults and name-calling,” Taylor, who is now a CNN contributor, wrote in a statement. “I wanted the attention to be on the arguments themselves.”

In the op-ed, Taylor slammed Trump for “amorality,” “reckless decisions” and “erratic behavior” — and he sparked a White House hunt for his identity.

White House press secretary Kayleigh McEnany released a statement blasting Taylor as a “low-level, disgruntled former staffer” and a “liar and a coward who chose anonymity over action and leaking over leading.”

But in many ways, the President’s decision to ignore the ramifications of sidelining scientists in favor of minimizing the pandemic and concentrating on his own electoral prospects validates Taylor’s critique.