Most of the coastal regions of the United States will get to watch Patriots-49ers in the late afternoon window on CBS in NFL Week 7.

New England and San Francisco are two of the most successful franchises of all time, with most of the 49ers’ glory years coming before the new century, which the Patriots have dominated. New England is coming off a surprising loss to the Broncos, but with Cam Newton one week healthier, they’ll be hoping to bounceback. San Francisco just rebounded from a bad loss to the Dolphins to beat the Rams in Week 6 and will look to get above .500 with a win.

For more info on if Patriots-49ers will be available to you on your local CBS affiliate at 4:25 p.m. ET on Oct. 25, check out the map and information below, along with a full Week 7 NFL schedule. 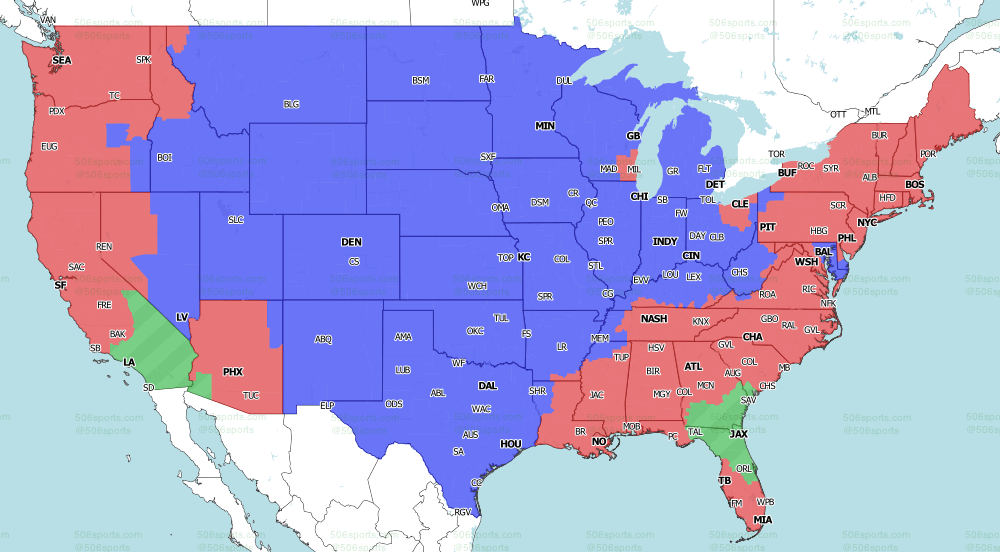 The Patriots vs. 49ers game can be viewed in any of the red regions in the map above. If you’re outside of a red region, these are the games you’ll see on CBS on Sunday:

What channel is Patriots vs. 49ers on?

The Patriots vs. 49ers game will be broadcast on CBS in regions throughout the country, denoted in reds in the map above. Some of the major metropolitan areas that will carry New England-Denver include San Francisco, Boston, Miami, New Orleans, Atlanta, Charlotte, Seattle and Phoenix.

If you’re unsure which of your local channels is CBS, specific channel number information for your locality can be found here.

How to watch NFL games on TV out of market

If you live outside the desired area on the coverage map above, there are other legal ways to watch NFL games while out of market. One way is to subscribe to the NFL Sunday Ticket package with DirecTV. More information on that package is here.

In Canada, all NFL games can be viewed via DAZN. More information on that subscription process is here. Viewers can also subscribe to NFL Game Pass, which has full access to a replay of the game soon after the live broadcast ends.