Thomas Wright’s Lowy Institute analysis “The Point of No Return: The 2020 Election and the Crisis of American Foreign Policy” is a very good summary of challenges facing any incoming Biden administration. But while Wright describes well the likely tensions of Biden’s foreign policy – as a battle less between moderates and progressives and more between two “intra-centrist” wings – he relies on some dubious premises about the world they expect to inherit in January 2021.

Chief among these is the assertion of a foreign policy “crisis” under Donald Trump. Crisis, for Wright, is seemingly the absence of a president sympathetic to his notion of US global leadership.

This is common to assessments that paint the pre-Trump years as halcyon days of US leadership. Yet foreign policy under Trump’s predecessors was the source of as much if not more discord than the 45th president has ever been able to generate himself.

Trump inherited a world in significant dislocation and a foreign policy widely chided by middle America as a sell-out of its interests. He did not provoke a crisis; he has responded to one.

The “post–Cold War order”, a concept so often assumed and asserted more than described, contained the Kosovo war (1999), in which Bill Clinton bombed Serbs with neither congressional approval nor a UN mandate. It was followed by the invasion of Iraq (2003), the greatest rift in the transatlantic alliance since the Suez crisis (1956). This war pitted, as Donald Rumsfeld gleefully saw it, “old” against “new Europe”. Like Kosovo, it was waged without the imprimatur of the international community that Trump is charged with forsaking.

The singular failures of internationalism have been on display in Afghanistan for nearly two decades. And this sapping war and the lessons it holds for the limits of liberal institutionalism are too often overlooked.

Compared to Iraq and Afghanistan, Obama’s efforts in Libya (2011) look half-hearted. Remove that comparative context, however, and Biden’s former boss is culpable for a war that has killed many more Muslims since US forces left than were ever saved by them going in. Again, as in the previous wars, the international community fractured and proved unfit for the task of nation-building in North Africa. 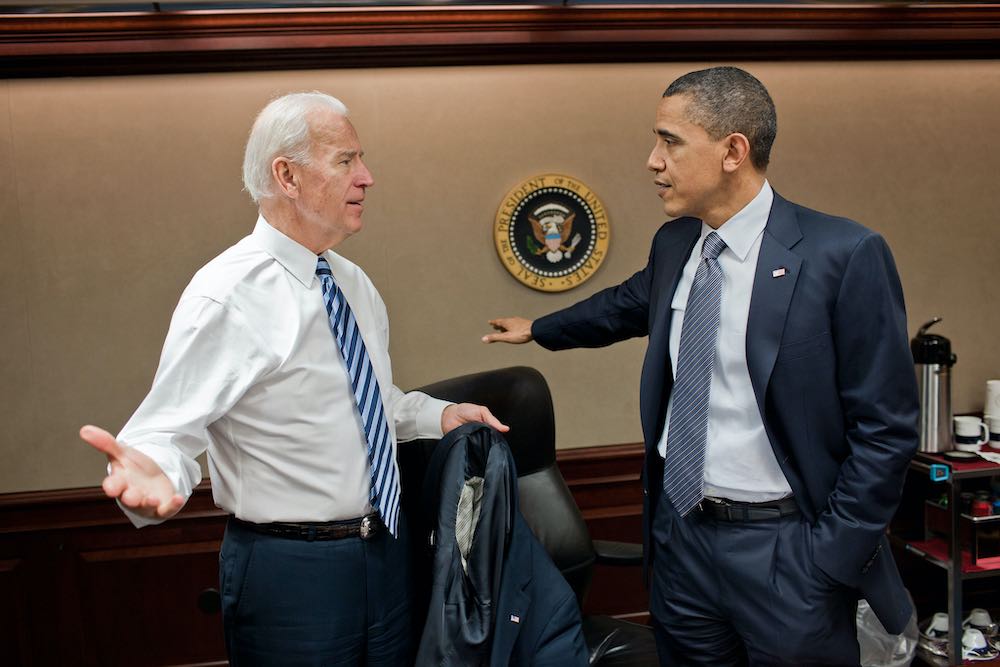 In Syria, Obama achieved a similar result – foisting anarchy-by-abandonment on a Muslim nation – but this time by deferring to Russia and the US Congress. In 2013, he bizarrely said it was up to Moscow and Republicans on Capitol Hill – the two great opponents of any Democratic president – to convince the Assad regime to stop using chemical weapons. If this is the alliance-building that Americans are nostalgic for, I remain sceptical that even Biden – a man who has apparently, according to his running mate Kamala Harris, said that “foreign policy might sound complicated but really it’s relationships” – would seek its restoration.

A case could be made that Trump has relied on alliances and diplomacy to advance US interests every bit as much his predecessors did.

The wonder, then, is not Trump’s betrayal of an ineffectual internationalism, but his avoidance of conflict where its ineffectuality might again be exposed. There is no equivalent in Trump foreign policy to the disastrous interventions of the Clinton, George W. Bush and Obama years. Some “world order” this was, some crisis Trump has brought about by its rupture.

Indeed, a case could be made that Trump has relied on alliances and diplomacy to advance US interests every bit as much his predecessors did. The relationship with India, the world’s largest democracy, despite Trump’s fetish for autocrats, is stronger than it was under the cosmopolitan-in-chief, Barack Obama. Ditto Japan and Vietnam.

Trump’s predecessor achieved essentially nil in the Middle East. His one deal – passed over congressional objection – served to enrich and empower a theocracy in Tehran, guaranteeing it a path to nuclear weapons under the guise of international law. The price paid for the Joint Comprehensive Plan of Action by the people of Yemen was especially high. To placate Saudi concerns over the Iran nuclear deal, Obama turned an increasingly blind eye to Riyadh’s war on Iran-backed Houthi rebels in Yemen. Trump has continued this indulgence. But Obama started it.

Palestinians were as dispossessed at the end of Obama’s eight years as they were at the beginning. They joined the Libyans and Syrians in a growing list of peoples abandoned by the Obama administration. Trump continued the trend by spurning the loyalty of the Kurds.

So to see “crises” all around for Biden to solve, we need to start earlier than 20 January 2017 – and to spread the blame for them more ecumenically. Trump did pass the Abraham Accords. Israel is now more secure with more of its neighbours than at any point since 1948. Crisis? Trump moved the US embassy to Jerusalem, provoking essentially zero crisis. 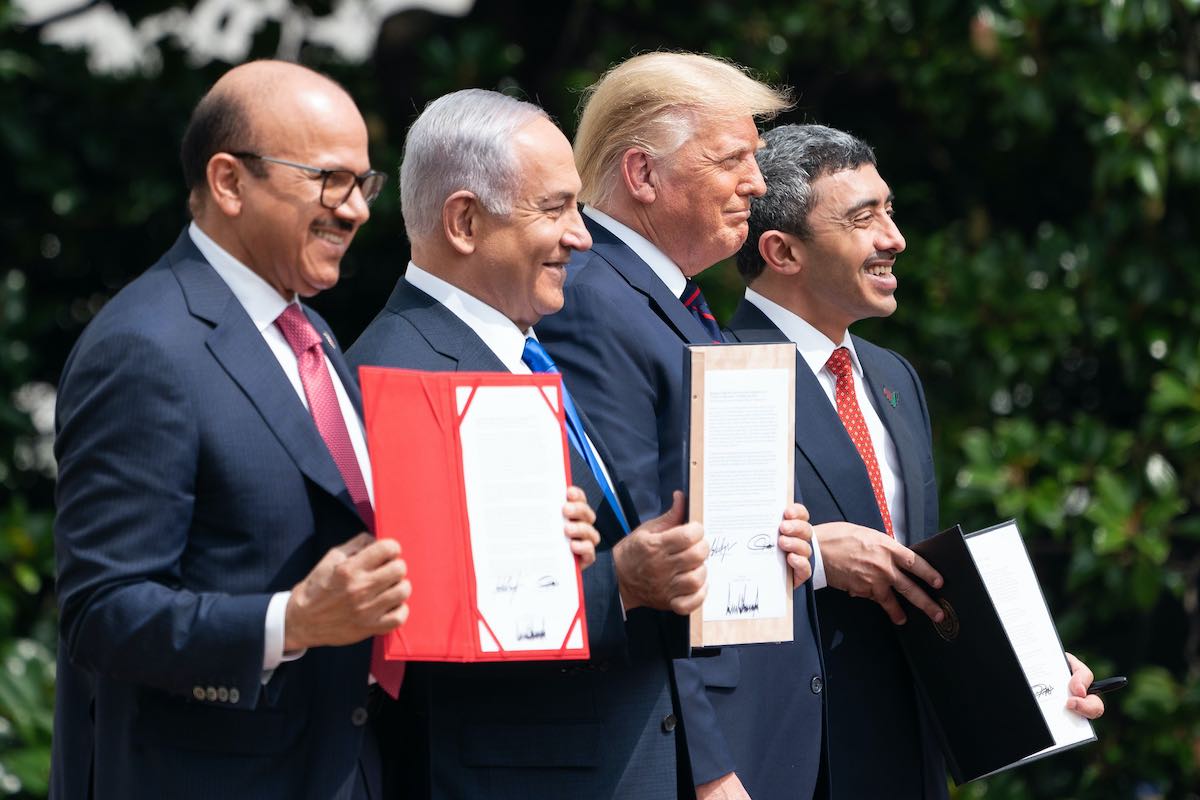 Signing the Abraham Accords in September between the US, Bahrain, UAE and Israel at the White House in September (Joyce N. Boghosian/White House/Flickr)

Even critics concede Trump’s trade war with China is unlikely to undergo significant revision by a President Biden, who must evade blame for shipping American jobs to the People’s Republic via the Word Trade Organisation and “permanent normal trade relations” – both of which he supported. Biden is likely to be a study in continuity with Trump when it comes to Beijing.

I have argued this in my recent book, In the Shadow of the Cold War, and have not yet been persuaded to alter my assessment: Trump inherited a world in significant dislocation and a foreign policy widely chided by middle America as a sell-out of its interests. He did not provoke a crisis; he has responded to one.

The highly variable skills and competencies Trump has brought to this task are, of course, debatable and indictable. He has none of the smooth diplomatic skills so often assumed of his predecessors in the White House. But those skills gave us some disastrous foreign policy episodes. Indeed, the consequences of the “best and brightest” running American grand strategy were on full display in the Vietnam war. This debacle, the first great betrayal of an ally – South Vietnam – repeated for assorted peoples after the Cold War, should make us cautious of the pre-Trump “world order” nostalgia.

Covid-19 is surely a crisis. But not a foreign policy one. The Chinese Communist Party is as much chastened as it is emboldened by Trump’s crude blaming of it for the virus. US allies have started to end their freeloading. Iran is more circumspect, Israel more secure. What, where is the crisis that Trump is responsible for and that Biden and his team of rivals must solve?