The president would likely have to engage in a series of high-stakes transactions that could produce unfathomable conflicts of interest. 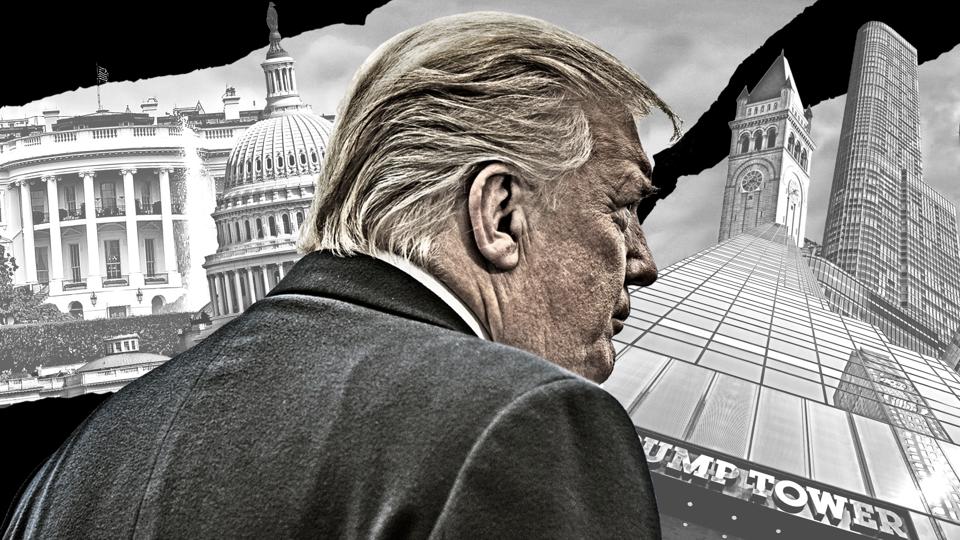 Whether or not Donald Trump wins the election, lenders will expect his businesses to pay back an estimated $900 million in the next four years, an alarmingly accelerated timetable that involves more than twice as much debt as the president previously indicated. In order to emerge unscathed, Trump will likely have to engage in a series of high-stakes, big-money transactions—deals that could produce arguably the biggest conflicts of interest that an American president has ever had to face.

About half of the debt coming due from the start of 2021 to the end of 2024 is secured against assets that the president and his children own outright. He will have to pay back loans against his hotel in Washington, D.C., his golf resort in Miami and his tower in Chicago. He’ll also have to sort out the debt against Trump Tower and Trump Plaza in New York City. 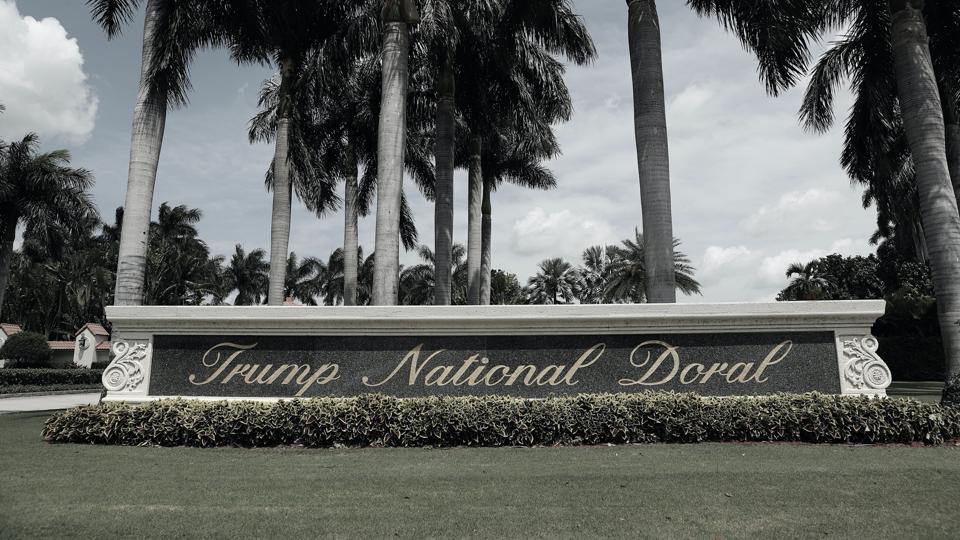 The president has two mortgages, totaling $125 million, against his Miami golf resort. Both come due in 2023.

The rest of the loans are held against 1290 Avenue of the Americas in Manhattan and 555 California Street in San Francisco, office buildings in which the president has a 30% limited partnership interest. Those properties currently have a combined $1.5 billion in debt against them, and Trump’s indirect share of their liabilities adds up to an estimated $447 million. As a limited partner, however, he presumably has less control over those obligations, as well as some protection if the properties fail to pay back their loans. “You know what limited means—limited as to liability,” Trump explained in a 2015 interview with Forbes, adding, “Where that is good is in bad times. If the world collapses, I’m not responsible for putting up any money.”

But make no mistake, the loans still have an enormous effect on his business. Trump’s interests in 555 California Street and 1290 Avenue of the Americas are the two most valuable holdings in his entire portfolio. The amount of money he can extract from them depends largely on the amount of debt they carry. Right now, the California skyscraper is encumbered with a loan of an estimated $541 million, expiring in September 2021. It’s the first in a series of loans set to come due in Trump’s second term. The president’s business partner, publicly traded Vornado Realty Trust, owns the other 70% of the building and is in charge at the property. It’s currently pondering what to do with the debt, having announced in June that it was considering recapitalizing the building.

If Vornado decides to sell, it would likely have to take a steep discount. After all, investors aren’t exactly clamoring to make big bets on office space these days. The potential conflict: maybe someone would be interested in paying top dollar if it meant pushing a large sum of money toward the president of the United States. If Vornado instead decides to refinance, it may not be able to secure its desired appraisal. On the other hand, big banks might be eager to help the president extract a fortune from the property.

Those same kinds of questions would likely complicate the decision-making around every expiring loan in the president’s portfolio. About a year after the debt against 555 California Street matures, the loan against Trump Tower is scheduled to be due, on September 6, 2022. The president borrowed $100 million against that property in 2012, and he has been paying only interest on it since then. But about two years into his potential second term, his lenders will be expecting a fresh $100 million.

The president would have to pay back two of his most troubled loans in the final year of his second term. 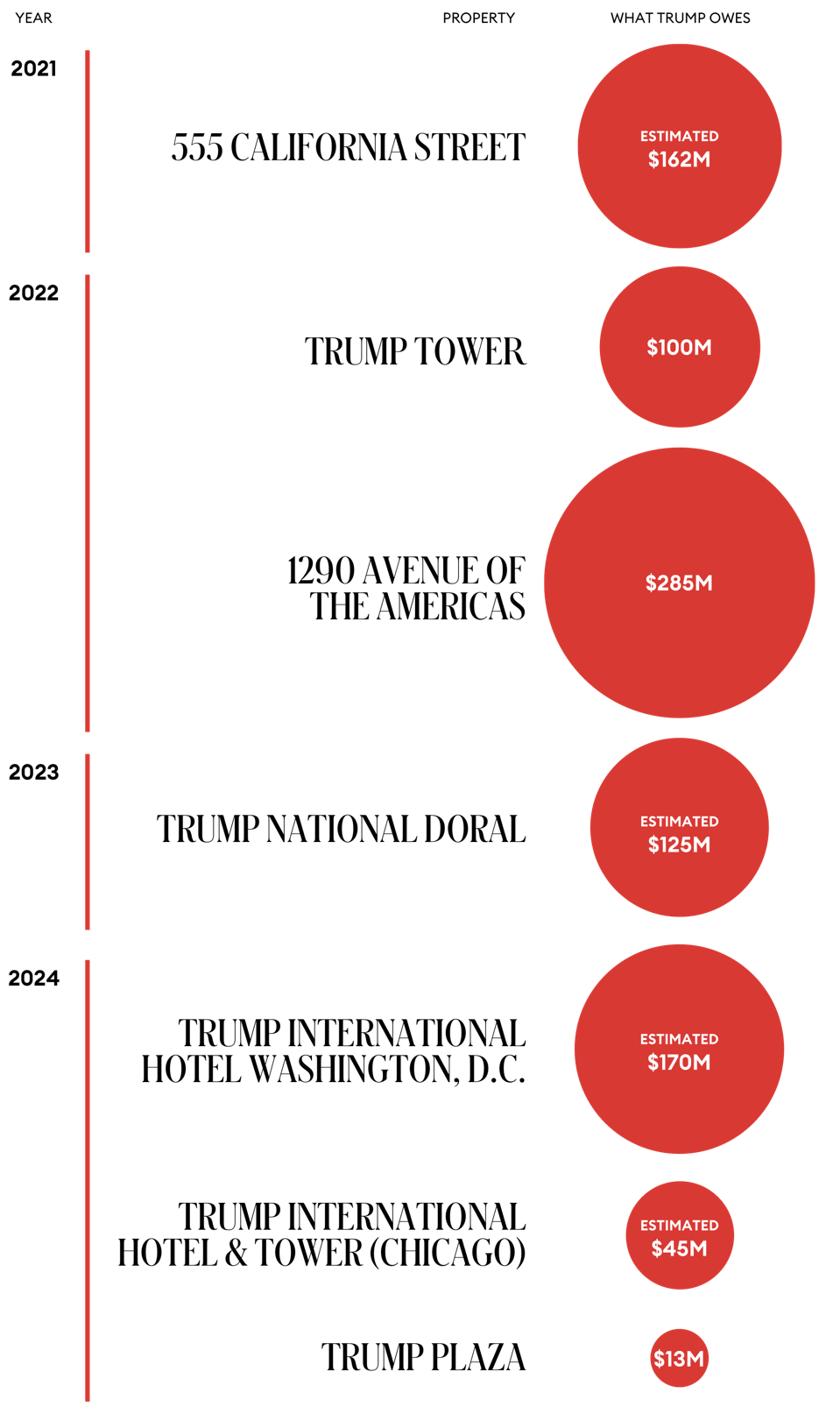 In November 2022, a couple of months later, the loan against 1290 Avenue of the Americas is set to mature. Trump’s indirect share of that loan, which amounts to $285 million, appears to be the single largest liability in the president’s portfolio. Assuming all goes well, Trump’s empire will have reworked an estimated $547 million worth of debt by the time he pays back that loan.

But that’s when things will get really complicated. By 2023, the Trump Organization will have to figure out what to do about the Deutsche Bank mortgages against Trump National Doral, the Miami golf resort, which total $125 million. It won’t be easy to sell the property—certainly not for the reported $363 million Trump has invested in it. Forbes estimates the place is worth only $153 million today. Lenders might also be wary of extending new debt there, given that Doral’s profitability plunged after Trump’s politics turned off many of the liberal Northeasterners who used to fly in for a few days of golf.

As Trump enters the final full year of his second term, his financial situation will grow even more fraught. His business will have to figure out what to do with the $170 million Deutsche Bank mortgage against the Trump International Hotel in Washington, D.C., which comes due in 2024. The Trump Organization reportedly tried to deal the property before the pandemic, hoping for an absurd $500 million sale. One real estate investor, named Brian Friedman, offered $175 million, but the Trumps turned him down. The market for luxury hotels ended up crashing as the coronavirus infected the country. The D.C. hotel now appears to be underwater, or close to it, and it seems clear that the place is not producing enough profit to cover its interest expenses. 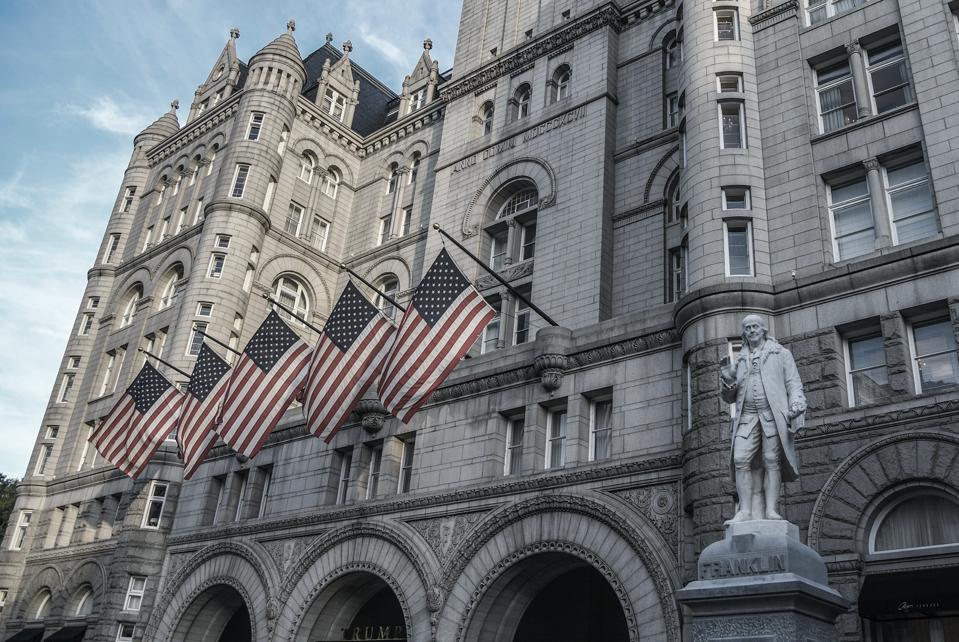 The Trump Organization got a $170 million mortgage from Deutsche Bank to build out its D.C. hotel. The loan comes due in 2024.

The Trump International Hotel & Tower in Chicago could also pose problems. The president has another Deutsche Bank loan against that property, for what appears to be $45 million. Documents obtained by the Washington Post show that the hotel, in which the president still owns an estimated 52% of the rooms, turned an operating profit of just $1.8 million in 2018. It’s hard to imagine the financial picture is any prettier these days.

For Trump, there is a way out of this mess. If Vornado refinances 1290 Avenue of the Americas and 555 California Street and borrows roughly 50% of the value of the assets, that would take care of the debt on those properties and allow the president to extract an estimated $50 million of additional cash. He could also refinance 40 Wall Street, again at 50%, and probably pull out another $60 million. In 2017, Trump paid off bonds against 6 East 57th Street in midtown Manhattan. Since that building is worth an estimated $179 million, he could presumably secure a new, $90 million loan against it without much trouble.

Then there are the vanity assets. Mar-a-Lago has no debt against it, so Trump could probably sell the Florida club and clear another $180 million before taxes. He could still retire at one of his other three houses in Palm Beach. If he got rid of his planes and helicopters, that would probably provide another $24 million or so. He could ditch his penthouse in New York City for an estimated $45 million. The winery in Virginia might go for $30 million. His home in St. Martin could probably fetch $12 million. And a mansion in New York, named Seven Springs, could trade for $30 million.

First son Eric Trump, who is handling day-to-day management of the business while Donald Trump serves as president, is staying positive—and employing a bit of Trumpian exaggeration. “We remain seriously underleveraged and maintain very low levels of debt,” he said in a statement.

Meanwhile, the selloff may already be under way. From 2017 to 2019, the president generated an estimated $118 million by dealing various properties. The St. Martin home is currently listed for sale, and the Wall Street Journal reported Thursday that the Trump Organization is considering selling Seven Springs as well. In all, refinancing and selling the aforementioned assets would seemingly free up close to $1 billion, enough to cover Trump’s looming debts. With every new deal, however, there would be additional questions about conflicts. Did a bank finance a certain loan because it believed in the transaction, or because it wanted to curry favor with Trump? Did the buyers really want to own those properties, or were they just looking to put millions in the president’s pocket?

Those are the sorts of concerns the Trump team claimed it was avoiding when the president refused to sell his assets around the time he took office. “Selling, first and foremost, would not eliminate possibilities of conflicts of interest,” Trump’s lawyer, Sheri Dillon, argued in a press conference nine days before the 2017 inauguration. “In fact, it would exacerbate them.”

Follow me on Twitter or LinkedIn. Check out some of my other work here. Send me a secure tip.