Cleveland Indians Place Brad Hand On Waivers, Hoping To Save $1 Million As The Pandemic Hammers Clubs

Many of the female voters who have abandoned Trump recoil from his divisive language and disapprove of both his handling of race relations and the pandemic. But he has tried to convince them to support him through a campaign of fear and xenophobia, with claims about the Democratic agenda that plunge deep into the realm of the ridiculous and would be believed only by the most naïve, low-information voters.

His speech Saturday night in Michigan exemplified those political miscalculations when it comes to women he has referred to as the “suburban housewives of America” as he tried to create fear about crime from immigrants and argued that Joe Biden will upend life in the suburbs by putting public housing projects in the middle of leafy neighborhoods — a reference to an Obama-era housing regulation aimed at ending segregation.

“Would you like a nice low-income housing project next to your suburban beautiful ranch style house? Generally speaking, no,” Trump said in Muskegon. “I saved your suburbs — women — suburban women, you’re supposed to love Trump,” he said.

The President went on to make the ludicrous claim that Biden and Democrats want to overwhelm Michigan neighborhoods with refugees from Syria, Somalia and Yemen, and “poorly vetted migrants from jihadist regions.”

Continuing his long-standing pattern of mocking women he perceives as opponents in sexist or misogynistic language — a tactic that does not go over well with women in either party — Trump attacked Democratic Michigan Gov. Gretchen Whitmer during the same rally, along with his 2016 opponent Hillary Clinton, and NBC’s Savannah Guthrie, who moderated his Thursday night town hall.

Trump accused Whitmer, whom he has previously called “a dictator,” of unnecessarily locking down her state as she fought the pandemic. That led his crowd to break into a chant of “Lock her up!” a little more than a week after federal authorities revealed a plot by extremists to kidnap Whitmer and overthrow the government.

Rather than condemning the derailed plot — which led to terrorism, conspiracy and weapons charges against more than a dozen men — or discouraging that kind of divisive language, Trump essentially endorsed the cheer with his authoritarian rhetoric about jailing his political opponents by adding Clinton and the Biden family into the mix.

“Lock them all up,” Trump replied to the crowd. 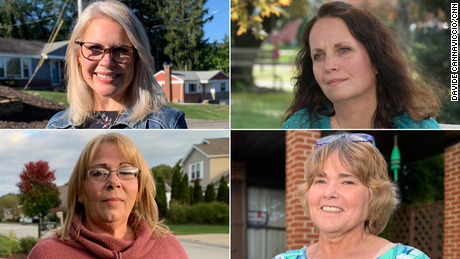 The Pennsylvania women Trump has lost

He complained that Whitmer said publicly that his refusal to denounce White supremacists, extremists and hate groups has emboldened activists like those who allegedly planned the foiled attack against her.

Whitmer immediately responded on Twitter: “This is exactly the rhetoric that has put me, my family, and other government officials’ lives in danger while we try to save the lives of our fellow Americans. It needs to stop.” Her staff echoed that plea. “Every single time the President does this at a rally, the violent rhetoric towards her immediately escalates on social media. It has to stop. It just has to,” her deputy digital director wrote on Twitter.

On Friday at a campaign event in Detroit, Biden condemned Trump for refusing to denounce White supremacist groups at the first debate and for criticizing Whitmer after the kidnapping plot was revealed.

“What the hell’s the matter with this guy?” Biden said. “Attacking Governor Whitmer on the same day this plot was exposed. It’s despicable.”

At his rallies Friday night and Saturday, Trump also attacked Guthrie as angry and overly emotional during the NBC town hall.

“Her face — the anger, the craziness,” he said, describing how he viewed the dynamic during a speech to his supporters Friday night. As he doubled down on the trope of the hysterical woman, he added that he told Guthrie to “Take it easy. Relax.”

Later in Janesville, Wisconsin, Saturday night, the President tried to undermine the credentials of the next female debate moderator, NBC News White House Correspondent Kristen Welker, by claiming that he’d known her “for a long time” and that “she is very unfair.” The final presidential debate, which Welker will moderate, is on Thursday in Nashville, Tennessee.

It remains unclear if the President simply does not understand how those attacks on women could backfire at a time when millions of female voters are deciding whether to give him a second chance, or whether he simply can’t resist engaging in those tactics because they rev up his crowds. Biden was up by 25 points among women voters in an average of the last five live interview polls, according to an analysis by CNN’s Harry Enten. In the final pre-election polls in 2016, Hillary Clinton only had a 13-point edge among likely female voters.

“The fake news keep saying that suburban women don’t like me because I don’t sound nice,” the President said. “I don’t have time to be nice. I got a lot of work to do for you.”

But his remarks have gone far beyond the limits of acceptable political discourse: he has referred to Democratic vice presidential nominee Kamala Harris as “a monster” and recently said of Clinton, “the glass ceiling broke her.”

While returning to some of his old lines from the summer about how the radical left plans “to erase American history, purge American values and destroy the American way of life,” Trump tried to revive the debate Saturday night over removing monuments that glorify American historical figures who were slave owners.

“This election will decide whether we preserve our magnificent heritage or whether we let far left radicals wipe it all away,” he said. “They constantly smear America as a racist country. … America is the most magnificent, most virtuous nation that has ever existed.”

At one point, he described his joy in watching law enforcement authorities move in on crowds to prevent violence in Minneapolis after the protests against racial injustice.

“I don’t know, there’s something about that — when you watch everybody getting pushed around — there’s something very beautiful about it. I don’t care what I’m doing. Not politically correct … But you people get it.”

Trump campaigns as if the pandemic is over

Trump campaigned in Wisconsin and Michigan on Saturday while scarcely mentioning the coronavirus pandemic, despite the fact that cases are rising in a majority of states across the country.

Michigan’s case count on Friday was the state’s highest number of positive test results reported in one day, according to the state’s Department of Health and Human Services.

Wisconsin also reported a new record high number of cases on Friday, according to data from Johns Hopkins University. The state’s positivity rate was at 23.91% as of Saturday morning, according to the COVID Tracking project.

On Friday, US Surgeon General Jerome Adams said Wisconsin is one of the Covid-19 “red” states that federal officials are watching closely.

Without laying out any specifics, Trump claimed Saturday that his plan “will crush the virus” and said his teams are working toward a safe vaccine and a “very rapid recovery.”

He acknowledged at one point that some states are currently seeing spikes, but then downplayed those increases in cases as part of a typical pattern for the virus.

Trump said there had been a recent spike or surge in cases in states like Arizona and Florida, but then insisted that it went back down.

CNN’s Betsy Klein and Sarah Mucha contributed to this report.