Beat Trump and rewrite democracy rules to build an America that serves its people: Stacey Abrams 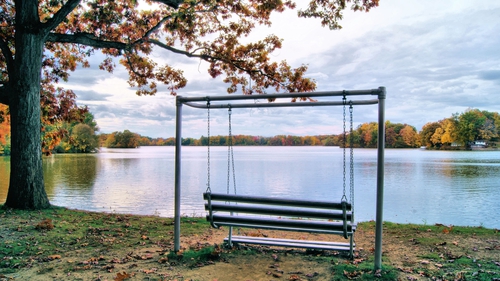 A swing overlooking a lake in the swing state of Ohio

Rather than a national election, the US presidential race often appears like a series of contests in less than a dozen states.

That’s because both the Republican and Democratic parties rely on consistent partisanship and polarisation in about 80% of US states.

These states have a strong record of voting for a particular party and polling suggests that the trends haven’t changed drastically.

Therefore, candidates see it as unnecessary to campaign in a state that they are almost guaranteed to win or lose.

Efforts instead are diverted to what’s known as swing states/battleground states/purple states – areas which have unclear party loyalties with persuadable voters.

How are swing states defined?

Why are swing states important?

We need your consent to load this rte-player contentWe use rte-player to manage extra content that can set cookies on your device and collect data about your activity. Please review their details and accept them to load the content.Manage Preferences

Swing states are important for their Electoral College votes.

Remember, the US Presidency is not determined by a popular vote, rather what’s called the Electoral College.

You can read an explainer on it here.

Winning swing states could significantly boost a candidate’s hopes of getting that 270 number.

What it means is that the contest for the presidential election really boils down to a handful of these purple states.

To assess what the swing states are in 2020, we need to look back at the last presidential race as there was a major reconfiguration of the electoral map.

In 2016, all indications pointed towards the usual swing states like Florida, Iowa, Ohio and North Carolina.

But when the results came in, it became apparent that other states were overlooked.

Polls suggested that Pennsylvania, Wisconsin and Michigan were relatively safe blue states but they flipped to red by tiny margins.

In 2016, Donald Trump narrowly won these states along with other swing states like Florida, North Carolina and Arizona.

Therefore, all of these states could be up for grabs in 2020.