A delegation of top United States officials, including Treasury Secretary Steve Mnuchin, will travel to Israel, Bahrain and the United Arab Emirates in the coming days in support of recently signed normalisation deals between the three countries.

In a statement on Friday, the US Treasury Department said Mnuchin would lead the delegation from October 17-20 “to support expanded economic cooperation” under the pacts brokered by US President Donald Trump’s administration.

The US announced on August 13 that Israel and the UAE had agreed to a pact to normalise diplomatic relations, and Bahrain followed suit less than a month later, announcing its own deal with Israel.

Representatives from all three countries formally signed the agreements during a ceremony at the White House on September 15.

The treasury department said Mnuchin and the US delegation, which includes US Ambassador to Israel David Friedman, will join Israeli officials on a direct flight from Israel to Bahrain.

They will meet with Bahraini officials in Manama before flying to Abu Dhabi, where “the first-ever Abraham Accords Business Summit” will be held. The group will then fly back to Tel Aviv, the department said.

It was not immediately clear which Israeli, Bahraini or Emirati officials would participate. 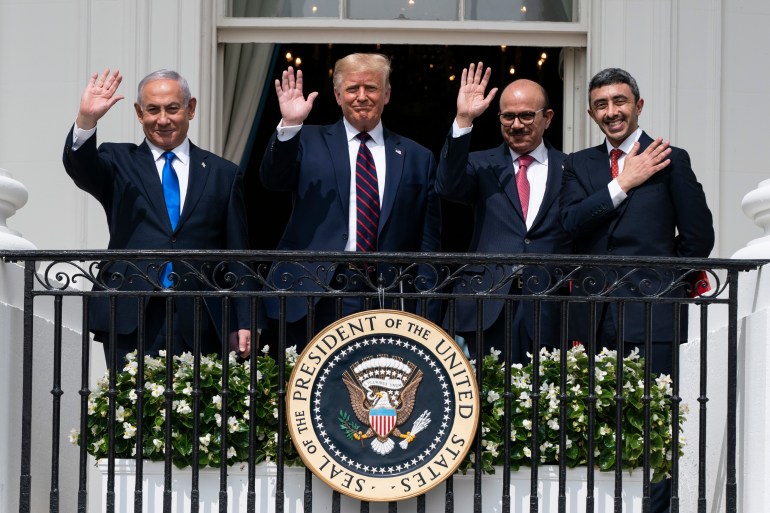 The leaders of Israel, Bahrain and the UAE signed the normalisation deals during a ceremony at the White House on September 15 alongside US President Donald Trump [File: Alex Brandon/AP]Trump has sought to use the normalisation deals to gain political points ahead of the November 3 presidential election, positioning himself as a greater friend of Israel than his Democratic challenger, Joe Biden.

While the agreements are low on the list of priorities for most US voters, a large portion of Trump’s supporters are Evangelical Christians who favour his pro-Israel positions.

The US president and his advisers have championed a so-called “deal of the century” proposal to resolve the Israeli-Palestinian conflict – and they have courted Arab Gulf states to try to drum up support for that initiative.

Palestinian leaders have slammed the Trump administration’s efforts, however, saying the US is a dishonest broker that unequivocally favours Israel and allows the Israeli government to pursue policies that violate Palestinian rights.

When the Israel-Bahrain deal was signed, the Palestine Liberation Organization (PLO), based in Ramallah in the occupied West Bank, called it “another treacherous stab to the Palestinian cause”.