Donald Trump loses yet another legal battle, will campaign in Georgia

Clusters of cases have emerged in Brooklyn and New York City’s northern suburbs in areas with large Orthodox Jewish communities.

After months of promising signs in its fight against the coronavirus, New York reported a spike in its rate of new cases on Monday, including a rise in New York City and in its northern suburbs.

The rate of positive test results in the city reached 1.93 percent, Mayor Bill de Blasio said on Monday, an increase from the 1.5 percent rate reported by the city a week before, as officials continued to warn about dangerous behavior in several communities.

The increase in the city, the one-time epicenter of the pandemic, contributed to the statewide rate of approximately 1.58 percent — a jump from results reported on Sunday and in prior weeks.

Gov. Andrew M. Cuomo, a third-term Democrat, said on Monday that the increase was primarily because of clusters in Brooklyn, as well as in Rockland and Orange Counties, in the Hudson Valley, saying there was “significant action” in those areas.

Officials are particularly concerned about eight neighborhoods in Brooklyn and Queens, some with large Orthodox Jewish communities, that have accounted for about one-fourth of New York City’s new cases in the past two weeks, despite representing about 7 percent of the city’s population.

On Friday, New York City health officials began carrying out emergency inspections at private religious schools in some of those neighborhoods and threatened to limit gatherings or force closings of businesses or schools if there was not better compliance with social-distancing requirements. The communities are celebrating Jewish high holidays through mid-October, which are marked by religious and family gatherings.

A continued rise could affect a closely watched plan to reopen the city’s schools. The mayor has said that he will automatically shut down classrooms — which are all slated to be open by Thursday — if the test positivity rate exceeds 3 percent over a seven-day rolling average.

On Monday, Mr. Cuomo said that he would make 200 rapid testing machines available to schools and local governments in areas where rates were rising, saying “the key with these clusters is to jump on them quickly.” 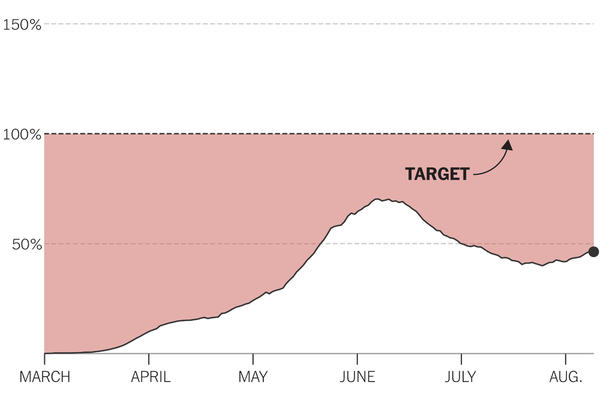 The number of daily coronavirus tests conducted in the United States is only 72 percent of the level necessary to mitigate the spread of the virus, according to estimates by researchers at the Harvard Global Health Institute.

In Rockland County, the positive test rate had steadily been ticking up since late August, according to county statistics. More granular data shows two towns with large Orthodox populations — Spring Valley and Monsey — have the bulk of active cases, mirroring outbreaks in those communities in the spring. A state tally was even more alarming, showing that nearly 13 percent of tests countywide that were reported back on Sunday were positive.

Ed Day, the Rockland County executive, said in a statement that they are working “closely with municipal, community and religious leaders” to reinforce social distancing and mask rules in hard-hit areas, as well as urging police, fire and building code officials to step up inspections.

In neighboring Orange County, officials on Friday reported their largest daily count of new cases since early May, a majority of which were clustered in the town of Palm Tree, N.Y., an Orthodox Jewish enclave.

In the second of two news conferences Mr. Cuomo held on Monday, the governor said the spike in the new cases was largely confined to 20 ZIP codes, where the rate of positive tests went as high as 30 percent, in contrast with the rest of the state, where the rate remained around 1 percent.

Mr. Cuomo stressed that “mask compliance is important,” and urged local governments to enforce mask rules and prohibitions on large gatherings, even if residents were feeling “compliance fatigue.”

All told, the state on Monday reported 834 new cases, out of nearly 53,000 tests, the governor said, adding that health officials planned to analyze the daily results by ZIP code “to see if we can target it” and contact hospitals in those areas.

New Jersey, which has suffered more than 16,000 deaths, has been grappling with its own cluster of new cases in Ocean County, located along the Jersey Shore. After reporting more than 700 new cases two days in a row, the state reported 561 positive tests on Monday, with 40 percent of them stemming from Ocean County, where Gov. Philip D. Murphy has deployed additional contact tracers.

The state’s positivity rate was 2.48 percent as of Sept. 24, the most recent date for which such data was available.

“We are not out of the woods yet,” Mr. Murphy, a Democrat, said in a news conference on Monday afternoon. “The numbers we have been seeing in the past week or so bear that out.”

Eleven New Yorkers were also reported to have died from COVID-19 on Monday; since March, New York has had more than 32,000 residents die, the most of any state.

The results come as New York City prepares this week to reopen its public schools to more students and allow restaurants to permit some indoor dining, two changes that Mr. Cuomo and other officials have warned could bring more infections.

The rate of new cases, which had been 1.1 percent or less since late June, had defied expectations and surprised experts, remaining mostly flat even as the state significantly ramped up its capacity to test up to 100,000 people per day.

But the statewide positivity rate began to creep up over the weekend, when officials reported rates just slightly above 1 percent; hospitalizations have also risen over the last several days, according to state statistics.

Mr. Cuomo has previously said that reaching a 2 percent positivity rate would make him “nervous,” and that surpassing a 3 percent rate would cause “the alarm bells to go off.”

While Mr. Cuomo noted that the positivity rate reported on Monday was still far below that of many other states and countries, he said that health officials would focus on increasing testing and compliance with social-distancing measures in areas seeing spikes. Ten ZIP codes that make up only 3 percent of the state’s population accounted for 27 percent of the new cases that were reported on Monday.

The governor and public health officials have been warning about the possibility of a second wave for months as schools reopen, people return to workplaces and subway ridership increases.

Over the summer, the state began requiring travelers from states with increasing cases to quarantine for 14 days upon their arrival in New York and fill out a health form at airports or risk steep fines, though the rule has been loosely enforced. On Monday, Mr. Cuomo said he would sign a new executive order that would subject most travelers from other countries to civil penalties if they refused to fill out the form.