Fears for the future of democracy in Trump’s America are raised by Darren Short, Karen Jacob, Andrew Ginsburg and Nigel Mellor 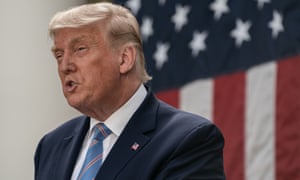 Karen Jacob wonders ‘if Trump is insane enough to push America into (at least) a military dictatorship and, at worst, a second American civil war’. Photograph: REX/Shutterstock

As a Guardian subscriber, a Brit, and a US resident, I find myself in the unexpected place of living in a country that is slipping into a dictatorship. It felt unthinkable four years ago – but so much of our daily lives now could not have been imagined back then (Donald Trump’s plot against democracy could break America apart, 25 September).

Today, we have a president who looks set to not accept the election result if he loses, we have a Republican majority determined to abuse their power, we have a military that has been used against peaceful protesters, we have a rigged election where people are deliberately prevented from voting against Trump, we have political television that is a mouthpiece for the regime, and our free press is labelled the enemy. I firmly believe we are living in the final days of what was once US democracy.
Darren Short
Seattle, Washington, US

• I wonder if Trump is insane enough to push America into a military dictatorship and, at worst, a second American civil war. His manipulation of the US electoral system, and damage to democracy proves he is a narcissist with no compassion for the American people, and certainly no care for peace if he can “win” another term in office.

With the right promoting the weakening of gun control, the fuse is lit for armed conflict between Republicans and Democrats, stoked by Trump for his own ends. Gilead rising? Margaret Atwood was prescient in her depiction of a rightwing dictatorship driven by a pseudo religious cult. Trump could readily be indicted for his behaviour.
Karen Jacob
Okehampton, Devon

• When President Trump said that we “need to get rid of the ballots” and that “there won’t be a transfer of power, frankly, but a continuation”, he made it clear that he will not accept an election loss, no matter how sizeable, and will foment civil war, if necessary, to keep his post (Donald in Blunderland: Trump won’t commit to peaceful power transfer at surreal press briefing, 24 September). Though the election is still weeks away, the president has already declared himself re-elected. To Trump, democracy is not sacrosanct, nor are the 200,000 US lives lost so far to Covid-19. What is sacred is avoiding jail time, a plausible reality if he loses to Joe Biden.

The only result that will guarantee his removal from office is a blowout loss in the election – one so lopsided that even if contested, the supreme court could not overrule. If every American votes with their heart and conscience, we can win back our country. If not, we will witness President Trump destroy our democracy, and replace it with a Putin-like kleptocracy. The man who penned The Art of the Deal has failed his constituents and pillaged a nation from inside the White House. Justice would see The Art of the Plea Deal written from inside a prison cell.
Andrew Ginsburg
Southport, Connecticut, US

• Jonathan Freedland’s excellent article perhaps misses an important point: Trump, with his anti-democratic policies, could legitimately win. America must then address the question, from a 1930s poster in the Topography of Terror museum in Berlin: “What is a democracy to do when the majority of the population no longer wants it?”
Dr Nigel Mellor
Newcastle upon Tyne