Deutsche Bank loaned Trump more than $2 billion over the course of two decades, at a time when other banks appeared unwilling to do so, according to an earlier Times report in February. The revelation that the president hasn’t paid any federal income tax in 10 of the last 15 years has many demanding answers.

Trump’s critics are pointing to the fact that Justin Kennedy, son of retired Supreme Court Justice Anthony Kennedy, was global head of the real-estate capital markets division at the bank and became close with the future president while continuing to lend him money. Kennedy worked at Deutsche Bank’s U.S. branch from 1998 to 2009.

“If I were Deutsche Bank executives who gave loans to Trump when no one else would, Including Anthony Kennedy’s son, I would be very, very nervous right now,” tweeted Norman Ornstein, resident scholar at the conservative American Enterprise Institute.

The recent New York Times report claimed that Trump paid just $750 in federal income taxes in 2016 and again in 2017. These claims are yet to be independently corroborated. The Times has not released the documents it obtained in order to protect its sources.

“We are not making the records themselves public because we do not want to jeopardize our sources, who have taken enormous personal risks to help inform the public,” the newspaper said.

The report has raised further questions about his credit worthiness and his vulnerability to foreign influence.

“Substantial personal debt is one of the most common reasons security clearances are denied, because it’s so easily exploited or leveraged by foreign intelligence services,” said former Missouri Secretary of State Jason Kander.

A White House whistleblower claimed in 2019 that the president’s daughter and son-in-law, Ivanka Trump and Jared Kushner, were granted security clearances over the objections of officials who feared they were susceptible to foreign influence, financial problems and a slew of other issues.

The president’s critics have also pointed to recent claims by Andrew Weissman, the lead prosecutor in Special Counsel Robert Mueller’s investigation of the Trump campaign’s alleged ties to Russia.

In 2017, the Mueller team issued subpoenas to Deutsche Bank for information about Paul Manafort’s income. Manafort had served as chair of Trump’s campaign and was later convicted of tax fraud as a result of Mueller’s probe.

The White House reportedly found out about the secret subpoenas and demanded answers from the Special Counsel’s office. Mueller’s deputy, Aaron M. Zebley, was authorized to tell the White House they were not investigating the president’s finances.

“At that point, any financial investigation of Trump was put on hold,” Weissman wrote in his book, Where Law Ends: Inside the Mueller Investigation. “That is, we backed down—the issue was simply too incendiary; the risk, too severe.”

The New York Times has said it will publish more information in the coming weeks but questions are already mounting for Trump and Deutsche Bank. The connection to Justice Anthony Kennedy’s son and Manafort’s dealings with the bank are likely to come under greater scrutiny as November 3 approaches. 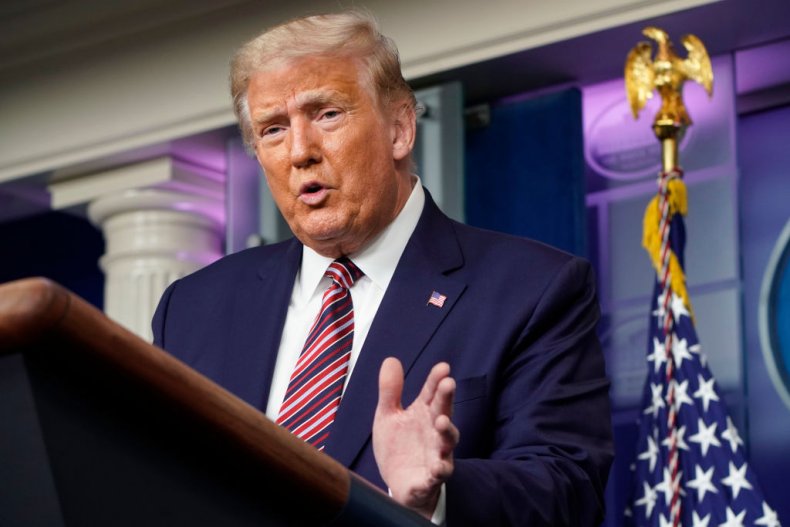 President Donald Trump speaks during a news conference in the Briefing Room of the White House on September 27, 2020 in Washington, D.C. Trump is preparing for the first presidential debate with former Vice President and Democratic Nominee Joe Biden on September 29th in Cleveland, Ohio. Trump’s taxes have raised new questions just weeks before the election. Joshua Roberts/Getty Images