Texans GAMEDAY: Will The ‘Past’ Haunt Them Vs. Colts?

With his nomination of Amy Coney Barrett to the Supreme Court — and her likely confirmation by the Senate by the end of next month — Trump will have personally chosen one-third of the members of the nation’s highest court and reshaped its ideology for decades to come.

Assuming Barrett is confirmed, Trump will have appointed more Supreme Court justices in his first term than any president since Richard Nixon, who appointed 4 between 1969 and 1971. And that is in addition to the more than 200 appointments Trump has made to lower courts during his first term in office.

It’s not too much to say that, with a major helping hand from Senate Majority Leader Mitch McConell of Kentucky, Trump has remade the judicial branch — from top to bottom — in a way that his predecessors can only dream of. And that, even if former Vice President Joe Biden beats Trump in 38 days time, it ensures that the 45th president will be remembered (for good and for ill) by partisans for a generation or more.

Biden, a former chairman of the Senate Judiciary Committee, himself acknowledged the impact of a president’s ability to appoint judges for a lifetime — all the way back in 1991.

That’s especially true given the age of Trump’s three appointees — and their ideological makeup.

Barrett, at 48, would be the youngest justice on the court, followed by fellow Trump appointees Neil Gorsuch, at 53, and Brett Kavanaugh, at 55. The next youngest justice is Obama appointee Elena Kagan, at 60. But then comes Chief Justice John Roberts, a George W. Bush appointee, who is 65 years old.

Three of the four youngest justices therefore will have been appointed by Republican presidents, with the three youngest all put on the high court by Trump. 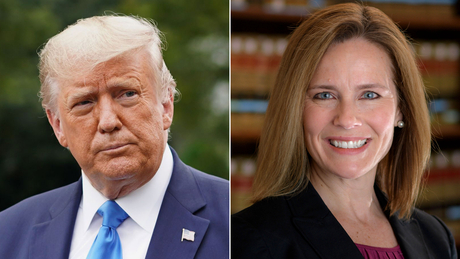 And then there is the ideological shift. When Trump moved into the White House in January 2017, the Supreme Court had four justices appointed by Republican presidents (Roberts, Anthony Kennedy, Clarence Thomas and Samuel Alito) and four justices appointed by Democratic presidents (Ruth Bader Ginsburg, Stephen Breyer, Sonia Sotomayor and Kagan). The ninth seat, vacated by the death of conservative Antonin Scalia in February 2016, had been left unfilled — as Senate Republicans refused to consider Obama’s pick for the seat: Merrick Garland.

Then when swing-vote Justice Anthony Kennedy, who long rankled conservatives with his liberal rulings on issues like gay marriage and abortion, announced his retirement in the summer of 2018, Trump chose Kavanaugh, another reliably conservative justice for the opening. (Kavanaugh’s confirmation fight, defined by allegations of sexual misconduct as a teenager, was the ugliest in modern memory; he was confirmed with just 50 votes.)

But it is in his latest pick that Trump will truly bend the ideology of the Supreme Court. RBG was, without question, the leading liberal on the bench. She will now be replaced by someone, in Barrett, who clerked for Scalia, and has long been a favorite daughter of the conservative legal community.

Assuming Barrett is confirmed — and McConnell appears to have the votes to make it so — the court will have a clear 6-3 conservative majority, with Roberts, who has been the key swing vote of late on major issues including the constitutionality of Obamacare, made somewhat less vital. (Vice President Mike Pence called Roberts a “disappointment to conservatives” last month.)

That is a massive shift that has both near term (the Court is set to again consider the legality of the Affordable Care Act on November 10) and long term (legalized abortion) implications.

For Trump, that long-tail effect means that even if he loses to Biden this fall, his legacy (and name) will carry on — as the man who tilted the courts to conservatives. (I would argue Trump will also be remembered for his botched handling of the coronavirus, which has left more than 200,000 Americans dead.)

Which is what Trump has always longed for.

It’s why he makes ridiculous rhetorical claims about how his administration has done more in its first fill-in-the-blank-years than any administration ever. It’s why he compares himself favorably to out greatest presidents — including Abraham Lincoln. (“I’ve always said I can be more presidential than any president in history except for Honest Abe Lincoln, when he’s wearing the hat,” Trump said in 2019.

It’s why Trump was baffled that George Washington didn’t name Mount Vernon after himself. (“If he was smart, he would’ve put his name on it,” Trump said, according to Politico. “You’ve got to put your name on stuff or no one remembers you.”)

And it’s why he has repeatedly expressed interest in his head being added to Mount Rushmore. (“Every single president on Mt. Rushmore — I’d ask whether or not you think I will someday be on Mt. Rushmore,” Trump said in 2017. “But here’s the problem: If i did it, joking, totally joking, the fake news media would say he believes he should be on Mt. Rushmore. So I won’t say it.” (Note: He did say it.)

What’s ironic is that, for all of his efforts to make himself someone who will be remembered after he is gone, Trump’s legacy will be one that just sort of happened to him. Senate Republicans refusing to seat Garland opened the door for Trump to nominate Gorsuch. Kennedy’s retirement, over which Trump had zero control, gave him the chance to put Kavanaugh on the Supreme Court. And, finally, the death of RBG, after she had repeatedly battled cancer and vowed to stay on the court until after the 2020 election, has handed Trump that rarest of all opportunities: A meaningful ideological shift for decades to come.

Trump’s legacy — or at least a piece of it — is now secure. Even if he didn’t do much to secure it.