Racism is a declared public health issue in 145 cities and counties across 27 states. Now what happens?

Voters have some big decisions to make when they cast their ballots by Nov. 3. A Joe Biden presidential victory could lead to the decriminalization of marijuana at the federal level, which would certainly be a big step forward for the industry though it would stop short of full federal legalization. In addition, Arizona, New Jersey, South Dakota, and Montana could be among the next states to legalize marijuana for recreational use as their voters decide whether to allow adult-use pot.

Scotts is the only pot stock in my portfolio, for the simple reason that it’s not a pure cannabis investment. The hydroponics and gardening company helps provide people and businesses with the tools to grow cannabis, but Scotts itself isn’t a pot producer. And so while it’ll benefit from more Americans growing cannabis, it doesn’t take on production-related legal risks. That’s why this is one of the safer cannabis stocks to own. And with a 37% return thus far in 2020, it’s easily outperformed the S&P 500, which is up around 1% this year.

The Ohio-based company did so well in the third-quarter results it released on July 29, for the period ended June 27, that it issued a special dividend of $5 per share. It also raised its dividend payments by 7% and now yields 1.7% annually (none of the other stocks on this list pay a dividend). Total revenue for the period was $1.5 billion, up 28% year over year. The hydroponics segment, Hawthorne, generated 72% sales growth with its revenue climbing to $302.9 million. Revenue from Scotts’ lawn and garden business (known as U.S. Consumer), grew by 21% to $1.1 billion as it continues to make up the bulk of the company’s overall sales. The company also reported a profit of $203.3 million, relatively unchanged from the $201.6 million net income it posted in the prior-year period. Scotts has reported a profit in two of its last four quarterly results.

With multiple states posting record cannabis sales numbers, including Colorado, Illinois, and Ohio, the industry’s already expanding rapidly. More states growing and selling pot would further increase the need for hydroponics, on top of the strong demand the industry is already having this year.

Curaleaf is a top multistate operator that has recently increased its presence to 23 U.S. states with the acquisition of Grassroots, which was completed in July. In February, the company announced the closing of its acquisition of Cura Partners, giving it the popular Select brand, which Curaleaf has been expanding in recent months.

In September, the Massachusetts-based company’s made moves for Select to enter Nevada and New York. Curaleaf says Select is available in 13 states. Select has also partnered with actor Jim Belushi’s cannabis farm to launch a vape pen exclusively in Oregon.

As more states legalize cannabis, there will be new opportunities for Curaleaf to continue its expansion. It’ll also allow the company to keep developing Select into a national brand. And that likely means even more acquisitions for Curaleaf coming down the pike. Although, it’s not as if Curaleaf needs help generating impressive numbers.

The company’s been growing quickly and it’s coming off a record performance in the second quarter. For the period ended June 30, its sales of $117.5 million rose 142% year over year. The Aug. 17 earnings release reported pro forma revenue of $165.4 million, which includes sales from acquisitions as if they were closed at the start of the quarter. Curaleaf’s also made progress further down the income statement, reporting a loss of $2 million compared to a net loss of $24.5 million in the same period last year.

Trulieve isn’t in nearly as many states as Curaleaf is, but it is signaling a possible expansion. Of its 61 dispensaries, only two are outside its home state of Florida (one is in Connecticut, and the other in California). The company announced in its Aug. 12 earnings release that it expects to enter the Massachusetts market in 2021. But the company isn’t stopping there. On Sept. 16, Trulieve announced the acquisition of two Pennsylvania-based companies, PurePenn and Solevo, giving it a presence in a fifth state. The company’s CEO, Kim Rivers, indicated in the announcement that the company is focused on expansion in the Northeast.

Like Curaleaf, Trulieve’s been doing a great job growing its business. But it’s been doing it by focusing on just one market: Florida. In its second-quarter results for the period ended June 30, its sales grew by 109% year over year, hitting a record high $120.8 million. Trulieve’s more disciplined growth strategy is evident in the company’s stronger bottom line. For eight straight quarters, the Trulieve has reported a positive net income number.

With a growing presence outside of Florida, Trulieve could generate even stronger sales numbers in the near future.

Which is the best pot stock to buy today?

Here’s a quick look at how all three stocks are doing this year: 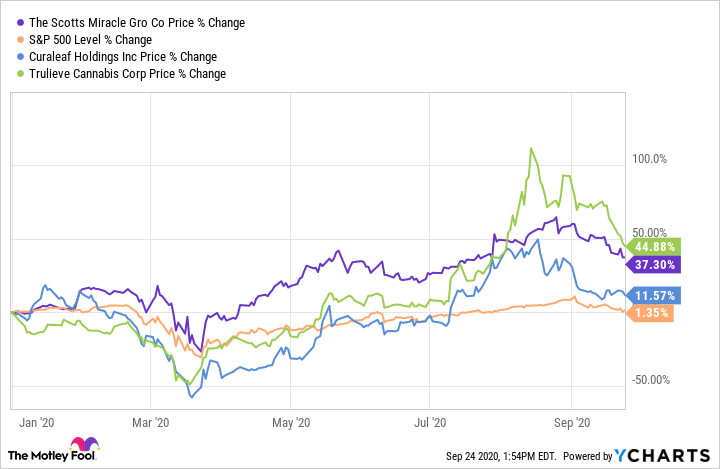 All three are soundly beating the S&P 500 index this year, although Curaleaf’s lagging behind the others by a fair bit. Ultimately, your decision on which stock is best may come down to your choice of strategy.

If you’re like me and are risk-averse and want a dividend, Scotts is the easy option. But if you want an all-out growth strategy, then Curaleaf’s definitely the stock for you. Trulieve, meanwhile, offers investors a bit of a mix in a slower, steadier growth strategy that’s allowed the company to remain profitable while still boosting its top-line along the way.

Either way, any of these three pot stocks look good today and could rally on some positive election results in November.