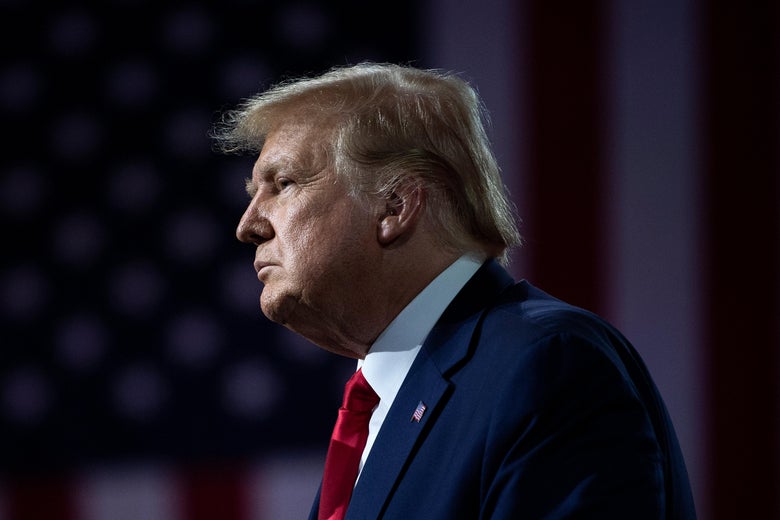 President Donald Trump lies constantly about the coronavirus. He has falsely claimed that he banned travel from China over the objections of his advisers (they had to push him), that he rushed to suspend travel from Europe (he waited a fatal six weeks), and that he was betrayed by Chinese President Xi Jinping (he collaborated with Xi to mislead the public). But this month, as Trump faced 200,000 coronavirus deaths and the prospect of electoral defeat, he has escalated his deceit.

At a White House briefing on Sept. 4, the president told reporters that he had acted to “stop Europe from coming in far sooner than anybody else, including Dr. Fauci and others, wanted to.” That statement—referring to Anthony Fauci, the director of the National Institute of Allergy and Infectious Diseases—is preposterous. On March 11, when Trump announced that he was banning travel from Europe to the United States, he said he was doing so “after consulting with our top government health professionals.” A month later, Trump summoned Fauci to a microphone to confirm that the doctor had urged him to impose the ban.

On Sept. 10, Trump told Sean Hannity that in January and February, he had played down the virus because “nobody had any idea it would be as violent as it turned out to be.” That’s completely false. On Jan. 28, national security adviser Robert O’Brien warned Trump, “This will be the biggest national security threat you face in your presidency,” On Jan. 29, trade adviser Peter Navarro told Trump that the virus could produce “a full-blown pandemic, imperiling the lives of millions of Americans.” And in a Feb. 7 phone call, Trump confessed to Bob Woodward that the virus was “deadly stuff,” five times more fatal than the flu.

“All through January and February, you were downplaying, by your own admission, the severity of the crisis,” George Stephanopoulos told Trump in an ABC town hall on Sept. 15. But Trump rejected that allegation. “Not downplaying,” the president retorted. Trump’s denial baffled some people in the audience. One voter, rising to speak, pointed out that in a tape-recorded interview with Woodward on March 19, Trump had literally said, “I wanted to always play it down. I still like playing it down.” But Trump, responding to the voter, repeated: “I didn’t downplay it.”

On Sept. 16, in an interview with Greta Van Susteren, Trump groused that Xi had initially told him the virus was “under control” in China. Trump claimed that later, when “people started seeing all of the dead bodies in China,” and when China refused to let the U.S. government “send over our doctors” to check out the situation, “I said, ‘That’s not under control.’ And that’s when I banned China from coming into this country.”

But that’s not what happened. The time line shows that even after Trump thought the crisis in China was bad enough to require a travel ban, he continued to issue false assurances. He specifically implied that China had welcomed medical experts sent by the U.S. government. The Chinese “have everything under control,” he asserted in a Fox News interview on Feb. 10, more than a week after he announced the travel ban. “We’re working with them. You know, we just sent some of our best people over there.”

Trump doesn’t just misremember months-old statements or events. He lies about things immediately after they happen.

Trump continues to lie about hydroxychloroquine, his discredited cure for the virus. On Sunday, he told right-wing radio host Dan Bongino that experts were coming around to his view of the drug. “Doctors are loving it more than ever,” he said. “It’s very safe.” In reality, studies published shortly before the interview had found just the opposite: “no benefit of hydroxychloroquine or chloroquine on the survival of COVID-19 patients,” “no benefit of hydroxychloroquine in patients affected by mild to moderate COVID-19 disease,” and “no significant reduction in mortality with HCQ use.” One study found “excess cardiovascular mortality” with long-term use. Two weeks before Trump spoke to Bongino, the Centers for Disease Control and Prevention had published a warning that the drug’s potential benefits in treating or preventing COVID-19 failed to outweigh its risks.

On Tuesday, another interviewer, Roop Raj of Fox 2 Detroit, asked Trump about a business executive who “wished that the country had shut down even two to three weeks” earlier than it had in mid-March. Trump told Raj that “nobody really thought to do that.” But Trump’s advisers had explicitly proposed it. Nancy Messonnier, the director of the National Center for Immunization and Respiratory Diseases—and a member of Trump’s coronavirus task force—had warned on Feb. 5, and for weeks thereafter, that Americans should prepare for “broader measures to mitigate the impact of the virus.” In a Feb. 25 briefing, Messonnier said “people need to start thinking about” closing schools and working from home. Trump responded by threatening to fire her. Two weeks later, he protested that even in bad flu seasons, “nothing is shut down, life & the economy go on.” He didn’t announce mitigation measures until March 16.

Trump doesn’t just misremember months-old statements or events. He lies about things immediately after they happen. “Fauci said we’ve done a fantastic job. He just said it yesterday,” Trump boasted during the ABC town hall. “He said we’ve done a fantastic job, that we didn’t mislead anybody.” But Fauci had said no such thing. In an MSNBC interview on Sept. 11, the doctor had been asked about discrepancies between Trump’s statements to Woodward and Trump’s statements to the public. Fauci explained that Trump’s public statements were false. “The president was saying it’s [the virus] going to disappear, which obviously is not the case,” Fauci observed. “When you downplay something that is really a threat, that’s not a good thing.” The doctor also shot down Trump’s line that America was “rounding the corner” on the virus. “We’re still getting up to 40,000 new infections a day and a thousand deaths,” he warned.

It’s hard to keep up with the president’s fabrications. To be “a great leader,” Trump argues, sometimes you have to be “not so honest.” But when a leader lies about a plague, people die. In this case, more than 200,000 of them.

Slate is covering the election issues that matter to you. Support our work with a Slate Plus membership. You’ll also get a suite of great benefits.