Building on his record of Promises Made, Promises Kept, President Donald J. Trump has released the Platinum Plan for Black America, which will uplift Black communities across the country through a $500 billion investment. After years of neglect by Democrat politicians, Black Americans have finally found a true advocate in President Trump, who is working tirelessly to deliver greater opportunity, security, prosperity, and fairness to their communities. While Joe Biden takes Black voters for granted – and even questions their blackness if they dare to support conservative ideals – President Trump is working hard to earn the Black vote through his Platinum Plan.

Across America, Black leaders are coming together to express support for President Trump’s second term agenda:

“President Trump has achieved more for Black America in four years than Joe Biden has in four decades,” said Calvin Tucker, Black Voices for Trump Advisory Board Member. “From 3 million new jobs to 500,000 additional black-owned businesses, President Trump generated unprecedented opportunity for the Black community, and he’s the only candidate on the ballot who can do it again.”

“Though Black Americans have traditionally been shut out of opportunities to grow our own businesses and create generational wealth, President Trump is working hard to give us access to the American Dream,” said K. Carl Smith, Black Voices for Trump Advisory Board Member. “Unlike career politicians like Joe Biden, President Trump is a businessman and understands that pride, community, and dedication are built through entrepreneurship.”

“While Joe Biden has bowed down to left-wing teachers unions at the expense of struggling students, President Trump has fought to give children across America access to school choice and quality education,” said Dr. Linda Lee Tarver, Black Voices for Trump Advisory Board Member. “We need a leader like President Trump who understands the crisis facing America’s public schools, not a career politician like Joe Biden who supports the failing status quo.”

“President Trump’s historic First Step Act has been hailed as the most meaningful criminal justice reform in a generation, bringing fairness to our prison system and preparing inmates for reentry into society,” said Corrin Rankin, Black Voices for Trump Advisory Board Member. “With his commitment to enact a Second Step Act in his second term, President Trump promises to bring justice to communities that have been denied fairness for far too long.”

“While Joe Biden has waged war on many of the values that Black communities of faith hold dear, President Trump has been a staunch defender of our religious liberties,” said Dean Nelson, Black Voices for Trump Advisory Board Member. “From protecting our right to gather and worship despite coronavirus restrictions to ensuring black churches have the ability to compete for federal dollars to help their communities, President Trump has delivered on his promise to always support people of faith.”

Click here to read the Platinum Plan, and see below. 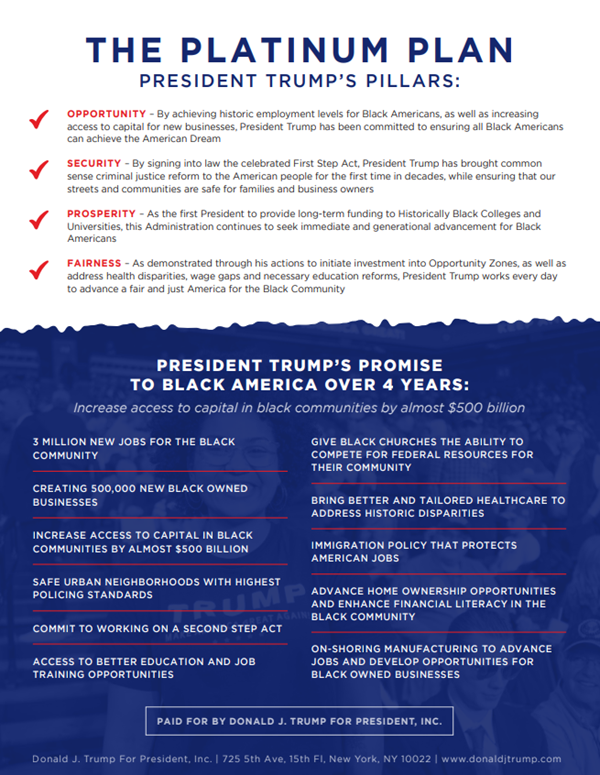 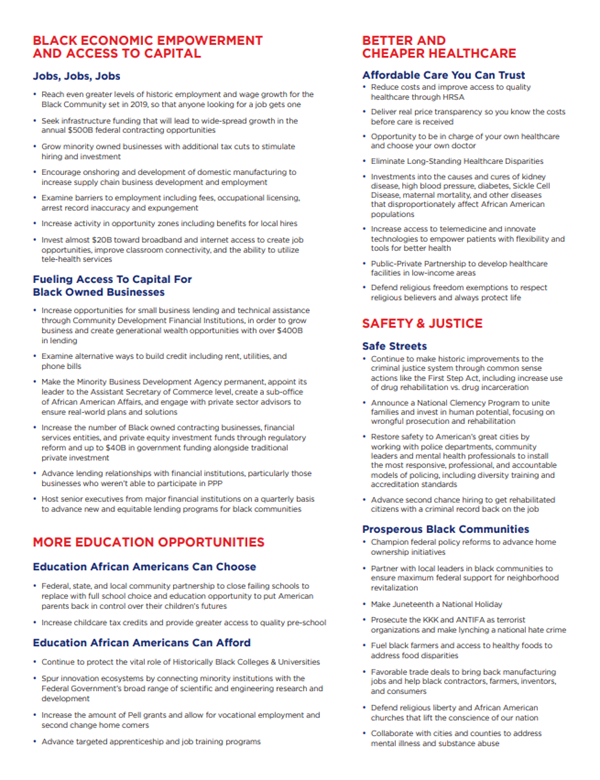