LAKE BUENA VISTA, Fla. — The Boston Celtics were 12 months into their season and 24 minutes from elimination, which was as good a time as any to realize that they were allowed to drive to the basket. They won Game 5 with what Miami coach Erik Spoelstra described “a deluge to the rim,” and now the teams leave Fake Boston to go to Fake Miami for Game 6.

The NBA bubble is a place for self-motived people. Everything about it promotes stasis. Nobody travels. The fans are virtual. Maybe that helps explain the Celtics’ lulls. Maybe now, after playing one of their best stretches of basketball when they desperately needed it, Boston can keep doing it.

Celtics coach Brad Stevens was asked if he told his team at halftime to drive to the rim, and he reacted like somebody asked if he decided, over breakfast Friday morning, to become a basketball coach.

Of the four teams left in the bubble, the Celtics are the most confounding. We know the Lakers rely heavily on LeBron James and Anthony Davis, the Nuggets have a deep group surrounding Nikola Jokic and Jamal Murray, and the Heat is a tough group of guys who look like specialists but play exceptionally well together. The Celtics? Depends on the night. They are young but experienced, full of talent but sometimes unsure of themselves, and they have a great coach but don’t always play like they do.

Early in Game 5, they threw two passes out of bounds and fouled three-point-shooters twice, though one of those was a really dubious call on Kemba Walker. This was a lousy performance for a team facing elimination, and it followed a lousy first half in Game 4, but the Celtics know as well as anybody that not all lousy halves are created equal.

“I think we competed,” star Jayson Tatum said. “I just don’t think our communication was that great in the first half. 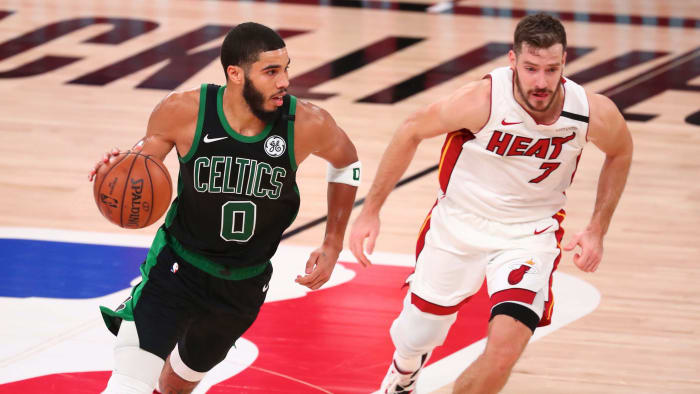 Brown said at halftime, Walker told the team to settle down a bit. They settled down just enough, and absolutely blitzed the Heat in the third quarter. They went from trailing by nine to leading by 14.

“We looked,” Brown said, “like the team that we all know and love.”

“We’re going to have to do it again and again because of the position we’re in,” Stevens said. “We’re trying to be our best.”

The Celtics do not have a classic facilitator. Walker and Tatum are primarily scorers, and Brown and Marcus Smart are best playing off the ball. But as Spoelstra said, “this is a team that has great offensive firepower.” The Celtics unlocked it by bearing down defensively. Everything flowed from there.

Tatum scored 31. Brown had 28. Heat players blamed themselves, of course; they thought their defense fell apart. Maybe it did, but the looks on Miami’s faces in the fourth quarter told a story. The Heat had no answers for a Celtics team playing at that level. If Boston can sustain it, this strangest of seasons might end in a most familiar place: Lakers-Celtics for the NBA championship.