“We have tremendous unity in the party,” Trump said of his Supreme Court pick during a campaign rally in Newport News, Virginia, on Friday night, adding that getting his nominee confirmed would be a “great victory” ahead of November 3. “They say the biggest thing you can do (as president) is the appointment of judges, but especially the appointment of Supreme Court justices. That’s the single biggest thing a president can do, because it sets the tone of the country for 40 years, 50 years.”

The President’s expected choice of Amy Coney Barrett, 48, a federal appellate judge and Notre Dame professor who was a law clerk for the late Justice Antonin Scalia in the late 1990s, would further shift the balance of the court to the right, potentially ahead of a consequential case on health care that will be heard a week after Election Day.

Barrett’s expected nomination — just one week after the death of Justice Ruth Bader Ginsburg — would inject another polarizing and unpredictable dynamic into the presidential race at a time of great anxiety for Americans. 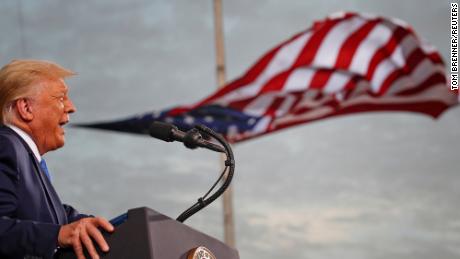 Trump foments mistrust of election he claims won’t be honest

Trump this week tried to keep the public’s attention away from the coronavirus pandemic as the number of cases ticked past 7 million and Americans grappled with an unshakable sense of economic uncertainty.

But in the lead up to his nomination announcement, Trump has only managed to create more anxiety. His refusal to commit to a peaceful transfer of power raised the specter that America will be transformed into a “banana republic” in November if Democratic nominee Joe Biden wins. The President contradicted his own FBI director by arguing that the election is rife with fraud and rigged against him, even though there is no evidence to support that conspiracy theory.

Trump also continued his war on science by undercutting his own medical advisers on the timeline for a vaccine and by suggesting that officials at the Food and Drug Administration might have political motivations if they take additional time to evaluate the safety of a vaccine. (The FDA declined comment on the President’s statement, but FDA Commissioner Dr. Stephen Hahn has said the “FDA will not authorize or approve a vaccine that we would not feel comfortable giving to our families.”)

A consequential pick for the high court

While he was stirring more chaos, Ginsburg’s death created another welcome distraction for Trump — a chance to remind conservatives, some of whom may have soured on the President during the pandemic, the redeeming power of a Trump White House: his appointment of an unprecedented number of federal judges in his first term.

At the same time, it is difficult to decipher the effect that the high court pick will have on the presidential race, because the anger about Republicans’ rush to confirm a replacement for Ginsburg has also electrified Democrats and led to a flood of donations to progressive groups and candidates.

Many Democrats view Trump’s expected choice of Barrett, whom he appointed to the 7th US Circuit Court of Appeals, as a direct rebuke to the legacy of Ginsburg, a liberal icon and staunch defender of abortion rights.

Based on Barrett’s judicial philosophy and her past writings, Democrats have argued this week that if she is named to the court — solidifying a 6-3 conservative majority — she will likely have a hand in rolling back abortion rights and striking down the Affordable Care Act.

The Supreme Court plans to hear oral arguments one week after the election on the future of the Affordable Care Act. A group of Republican state attorneys general and the Trump administration have argued that the law’s individual mandate is unconstitutional and there are legal grounds for striking down the law in its entirety.

“What matters most is that health care is on the ballot and is in front of the Supreme Court,” Delaware Sen. Chris Coons, a Democrat on the Judiciary Committee, told CNN’s Wolf Blitzer, noting that the health care law protects those seeking health insurance from discrimination based on pre-existing conditions — which will now include health complications for those who contracted Covid-19.

“We know that Judge Barrett has made statements disparaging the Affordable Care Act, disparaging the decision that upheld the Affordable Care Act,” Coons said during an interview on “The Situation Room” Friday evening, “and I think this is a significant concern for millions of average Americans in the middle of a pandemic that doesn’t seem to be going away any time soon.”

But Republican senators and activists who have defended Barrett, the mother of seven children, have accused Democrats of targeting her because of her Catholic faith. Democratic Sen. Dianne Feinstein angered Barrett’s supporters in 2017 when she challenged Barrett during her confirmation hearings for her seat on the 7th Circuit by alluding to her faith and stating that the “dogma lives loudly within you.”

Barrett met with Trump earlier this week and was widely viewed as one of his top contenders for the Supreme Court vacancy in 2018, when Justice Anthony Kennedy announced his retirement. The President ultimately chose Brett Kavanaugh as Kennedy’s replacement. 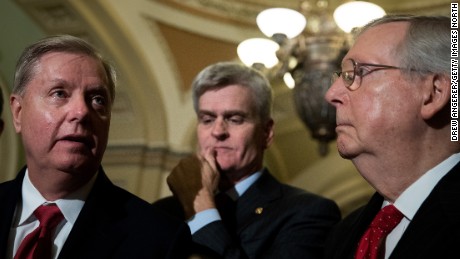 Republicans have signaled plans for a quick Supreme Court confirmation process. Here’s when it could happen.

As part of their strategy in the upcoming confirmation hearings, Democrats plan to ask Trump’s nominee to recuse herself from any case involving the presidential election results, given that the President will have just named her to a lifetime appointment.

They plan to use the President’s words against him — noting that he has justified his brisk push to replace Ginsburg on the court by stating he wants to avoid a 4-4 tie on the Supreme Court if election disputes arise.

After the President refused to commit to a peaceful transfer of power this week, he continued to insist that the presidential election is “rigged” and that mail-in ballots are a “scam.”

Trump and his allies seized on reports about an incident in Pennsylvania, where nine ballots were improperly discarded, to further sow unfounded distrust in the election and falsely claim that Democrats are “trying to steal the election.” 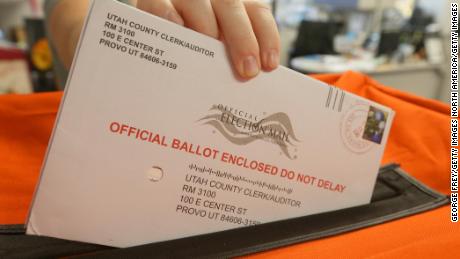 But speaking under oath to the Senate Homeland Security Committee on Thursday, FBI Director Christopher Wray undercut Trump’s arguments of election fraud by stating, “We have not seen, historically, any kind of coordinated national voter fraud effort in a major election, whether it’s by mail or otherwise.”

That statement drew a swift rebuke from Trump’s chief of staff Mark Meadows, who disputed Wray’s assertion during an appearance on “CBS This Morning” on Friday.

“With all due respect to Director Wray, he has a hard time finding emails in his own FBI, let alone figuring out whether there’s any kind of voter fraud,” Meadows said. “This is a very different case. The rules are being changed.”

“Perhaps he needs to get involved on the ground and he would change his testimony on Capitol Hill,” Meadows added.

Later on Friday, during his rally in Newport News, Trump said he wanted to see “a smooth beautiful transition” after the election — but only if it’s an “honest vote,” he said, reiterating debunked claims about unsolicited ballots.

“We’re not going to lose this except if they cheat, that’s the way I look at it,” Trump said, repeating baseless claims about “mischief” — now a cornerstone of his stump speech — meant to sow more distrust in an election that polls currently show him losing. 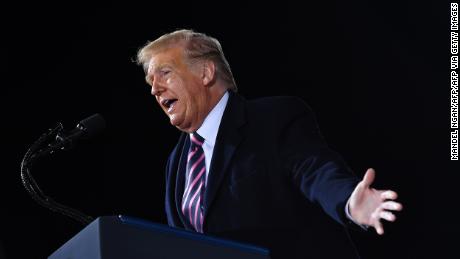 One Democrat who seemed unfazed by Trump’s refusal to unequivocally commit to a peaceful transfer of power was Biden, who said Friday the American people “aren’t going to be shut down in this election.”

“Every vote in this country is going to be heard and they will not be stopped. I’m confident that all of the irresponsible, outrageous attacks on voting, we’ll have an election in this country as we always have had. And he’ll leave.”