Morrison: Donald Trump and the assault on the Capitol

Israel and US officials to hold first talks on Iran, Abraham Accords

What the Biden presidency may mean for Africa 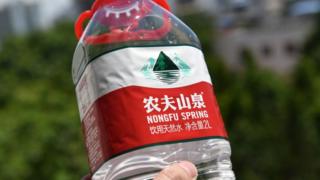 The richest person is China is a bottled water tycoon, knocking Alibaba founder Jack Ma from his mantle.

The recent stock market listing of his bottled water firm and a controlling stake in a vaccine maker have helped boost his fortunes.

Most of China’s new billionaires come from the tech industry. But rising tensions between China and the US over Huawei, TikTok and WeChat have pushed down valuations of Chinese tech stocks.

China’s food and grocery sector is now vying with its tech industry in producing the country’s richest business people.

In April, Mr Zhong’s Beijing Wantai Biological Pharmacy Enterprise listed on the Chinese stock market. His controlling stake in the firm saw his overall wealth jump as much as $20bn by August.

The pharma company says it has partnered with two universities to develop a candidate vaccine to fight Covid-19.

Nongfu Spring shares jumped 54% on the first day of trading earlier this month when they were listed on the Hong Kong stock exchange.

But this week’s downturn for tech stocks saw the Chinese tycoon move up the wealth rankings.

Mr Zhong may not stay ahead of Mr Ma, who has held the top spot for the past six years, for long.

Alibaba-backed Ant Group is due to list on Chinese and Hong Kong stock exchanges next month, which will boost the tech boss’s wealth even further.

The online payments firm could net Mr Ma an estimated $28bn if the company achieves the $250bn valuation it has been targeting.