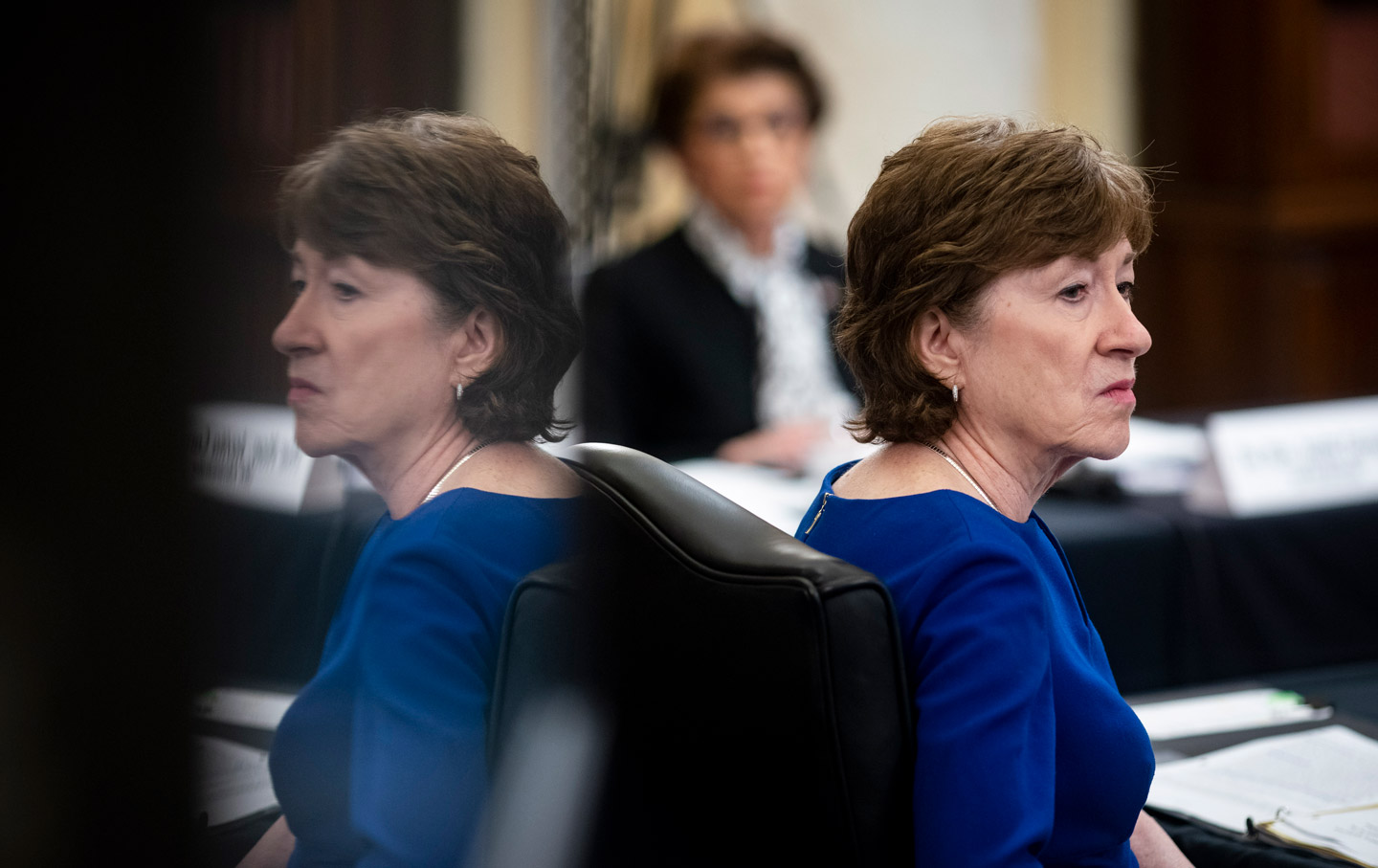 Ready to fight back?

Sign up for Take Action Now and get three actions in your inbox every week.

You will receive occasional promotional offers for programs that support The Nation’s journalism. You can read our Privacy Policy here.

Thank you for signing up. For more from The Nation, check out our latest issue.

Sign up forTake Action Nowand we’ll send you three meaningful actions you can take each week.

You will receive occasional promotional offers for programs that support The Nation’s journalism. You can read our Privacy Policy here.

Thank you for signing up. For more from The Nation, check out our latest issue.

Travel With The Nation

Be the first to hear about Nation Travels destinations, and explore the world with kindred spirits.

Maine Senator Susan Collins won’t say whether she will vote for Donald Trump on November 3. But she votes for him when it counts: on the floor of Senate and in the court of public opinion.

For Collins or her champions to suggest otherwise—as the senator seeks a fifth term this fall—is a lie every bit as outrageous as those told by the president she has so loyally and effectively served.

Collins, who has for a quarter-century positioned herself as an independent-minded Republican with a moderate streak, has, since the 45th president assumed office in 2017, made herself his essential ally in the Senate. To a far greater extent than Senator majority leader Mitch McConnell from Kentucky, or Senate Judiciary Committee chair Lindsey Graham from South Carolina, it is Collins who has risked her reputation and her political position to protect and serve Trump. While McConnell may be more determined in his manipulation of the chamber on the president’s behalf, and while Graham may be more cynical in his defenses of the man he once decried as “a race-baiting, xenophobic, religious bigot,” it is Collins who has provided the high-profile support that the president needed at every critical juncture in his presidency.

Before the 2016 election, Collins announced that she had reached “the inescapable conclusion that Mr. Trump lacks the temperament, self-discipline and judgment required to be president” because the Republican nominee “opts to mock the vulnerable and inflame prejudices by attacking ethnic and religious minorities.” Yet, even before Trump took office in January 20, 2017, the senior senator from Maine was leading the charge on behalf of some of the new president’s most controversial cabinet picks; Collins actually appeared before the Senate Judiciary Committee to assure committee members that attorney general–nominee Jeff Sessions—a xenophobic zealot with a track record of mounting racist attacks on voting rights—wasn’t that bad a guy. When Trump’s second Supreme Court nominee, Brett Kavanaugh, faced charges of sexual assault and lying to the Senate, Collins rallied to Kavanaugh’s defense and tipped the balance in favor of the president’s pick. And when Trump faced a damning set of impeachment charges, Collins voted to acquit him—declaring that the president had “learned a ‘pretty big lesson’ from the impeachment process and would be “much more cautious in the future.”

Collins broke with Trump on some issues. For instance, she and Alaska Senator Lisa Murkowski opposed the nomination of the president’s most woefully unqualified cabinet choice, Betsy DeVos, to serve as secretary of education. But DeVos was going to be confirmed even without her—and Collins knew that.

When it has mattered, the Maine senator has voted with her party’s president—maintaining a 94 percent record of voting with Trump that is even more consistent than that of Kentucky Senator Rand Paul.

Now, however, Collins won’t say whether she will vote for Trump in November. When the issue came up in last week’s Maine Senate debate, Collins dodged it with the glibness of the career politician that she is: “Let me say this: I don’t think the people of Maine need my advice on whom to support for president.”

In a state that polls suggest will vote for Democrat Joe Biden over Trump, Collins did not want to offend Biden voters. But she also did not want to do anything to disappoint the president’s Republican base. Her Democratic rival, Sara Gideon, who serves as the speaker of Maine’s state House of Representatives, has been open and honest with voters, making it clear that she would have voted against Kavanaugh’s nomination and in favor of removing the president—and that she will vote for Biden in November. But Collins is trying to have it both ways—as she did during the Kavanaugh hearings when she played like she might not vote to confirm Trump’s pick.

Collins’s obfuscation is, in many senses, more shameful than her voting record. The senator is a charlatan who thinks she can fool the voters of Maine one more time with a pretend-moderate act that has worn thin. She’s trailing in the polls and she knows her only hope for maintaining her sinecure in the Senate is to pretend to be someone she is not. It’s so bad that in August, after Collins appeared at a Republican gathering in Springvale, Me., the senator’s campaign was accused of posting social media images that slyly left Trump signs out of the picture.

But Collins has a problem when it comes to maintaining her supposedly independent image. Her own party is off message. Last month, Maine Republican Party chair Demi Kouzounas was asked during a “Trump Victory” call with party loyalists to explain why the embattled senator was not attending the Republican National Convention. “They’re not mutually exclusive. I think they both have their jobs to do,” explained Kouzounas. “They both support each other.”

That was damning. But not as damning as what Collins aide Carol Woodcock said in February, when she addressed Maine Republicans in Washington County.

“Senator Collins is committed to keeping this seat Republican,” said Woodcock, who urged the crowd not to take seriously television ads criticizing the incumbent. “As Republicans, we need to ask ourselves: ‘Why are they spending so much money to defeat her?’ The answer is quite simple: They want the Democrats to take control of the Senate. But they can’t take control of the Senate as long as Senator Collins wins. I can assure you that there’s two people who want you to vote for Senator Collins. One is the Senate majority leader, Mitch McConnell, and two is our president, President Trump.”

That’s no exaggeration. Trump doesn’t care if Collins says she will vote for him in November. He knows that Susan Collins has given him the votes that he needs.