With 47 days to go until the election, Air Force One flew into central Wisconsin’s airport on Thursday evening, where Donald Trump pitched himself as the lone figure standing between Americans and leftwing radicals bent on chaos.

In a speech that ran close to 90 minutes, Trump boasted of economic success prior to the pandemic, promised to “deliver a safe and effective vaccine before the end of the year”, and framed Joe Biden as a feckless, career politician eager to confiscate guns, raise taxes and lead the nation toward anarchy.

And, as he has done in previous rallies, Trump also veered into rambling, at times bizarre claims, including an unspecific assertion that he “saved the suburbs” and that it’s legal to “climb over” someone’s face while protesting but not always legal to host a rally. 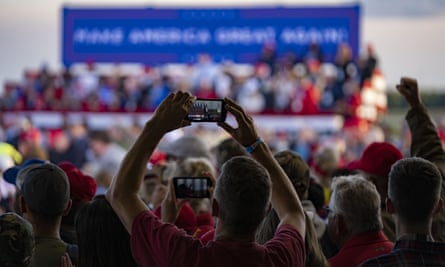 But the messages played well with the crowd that gathered on a chilly September night, many of whom waited for hours in the cheery anticipation of a sporting event to snap a photo of Air Force One or hear the president speak. Cheese curds, a Wisconsin staple, were not on the food truck menu. Maga curds were sold instead.

“Trump, he’s for us, he’s for our rights,” said Lori Cates, 52, of nearby Stevens Point. “Too many of the good things he’s done for our economy are overlooked. Biden, Kamala, the socialist left, they want to take our guns away. For too long I didn’t pay attention. Not any more.”

Temperature checks were required for those entering the rally and bottles of hand sanitizer passed out. But masks were optional and few and far between. Meanwhile, Wisconsin’s rates of Covid infections are surging, with positivity rates reaching north of 20% in recent weeks.

Reporting from the New York Times shows eight metro areas in the state top the list of where Covid rates are rising fastest – including Stevens Point, 20 miles south.

But those stats didn’t have Lori Cates too worried. “I think a lot of it is made up,” she claimed. “It’s a ploy to take away from (Trump’s) success.”

Jennifer Warner, 34, made fast business out of her so-called Trump trailer, selling shirts, hats, cups with crude messages aimed at ruffling progressives. An hour before the rally started, Warner had plenty of Don’t Tread On Me flags, but she was sold out of whiskey glasses that read: “Fuck Your Feelings”.

“Hey, do you have any more shirts left that say ‘No More Bullshit?’” a customer asked Warner. But she was fresh out of those, too.

For Mosinee, a fading paper mill town on the banks of the Wisconsin River, it was the second visit from Trump in as many years – a meaningful stop for residents living in Wisconsin’s northern half, said Mike Wagner, a professor of political communications at the University of Wisconsin.

“Mosinee is a part of the state that often gets ignored, and resents being ignored. Giving attention to them, that’s half the battle,” Wagner said.

That point wasn’t missed by Angel, the barkeep at RoundAbout 2, a tavern on Mosinee’s main street, who asked to be identified only by her last name. 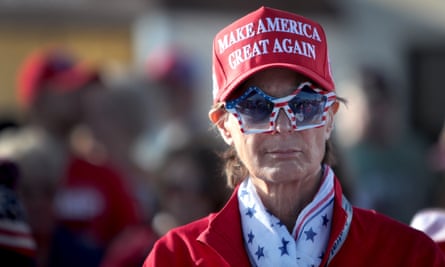 Supporters of Donald Trump wait for the start of the rally in Mosinee. Photograph: Scott Olson/Getty Images

Yet whatever bump the visit may have on elections is to be determined. With election day seven weeks away, the state is still very much in play. A survey published last week by the Marquette University’s law school had Biden leading Trump by four points, 47% to 43% – a lead that’s narrowed slightly in recent weeks.

Charles Franklin, the poll’s director, said the biggest surprise in the data is that the tragic events in Kenosha, three hours south, didn’t seem to shift public opinion in any significant way.

On 23 August, police officers in Kenosha shot 29-year-old Jacob Blake seven times in front of his children. Two days later, amid the ensuing protests, 17-year-old Kyle Rittenhouse was accused of shooting three people, wounding two of them fatally. He has since been charged with two counts of homicide and one count of attempted homicide.

But surveys conducted in the wake of the events showed no significant change in attitudes toward the protests or how they were handled.

Despite such a vivid series of events so close to home, and a president who has couched the unrest as a threat to the suburbs and folded them into his law-and-order message, data suggests that Trump isn’t growing support, Franklin said.

“It’s simply preaching to the choir,” he said. “It’s strengthening him with his base.”

That entrenchment into already-held beliefs is part of what has made Milwaukee, Wisconsin’s biggest city, one of the most politically polarized cities in the nation.

And Wagner, a political science expert, said that polarization – fueled in part by partisan gerrymandering in Wisconsin – has only grown more pronounced in recent years.